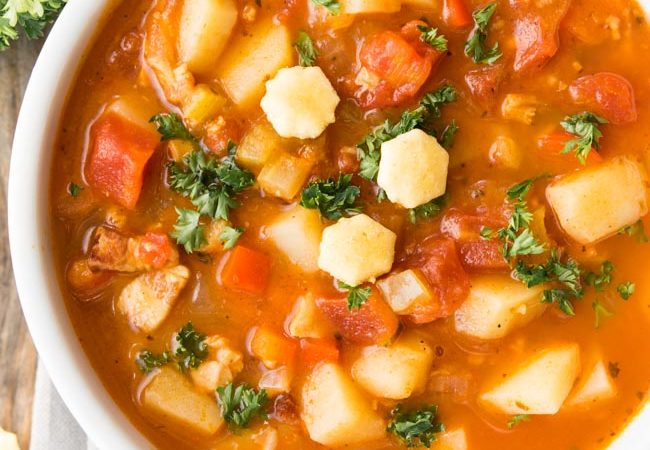 Manhattan Clam Chowder, that “other” soup with clams, highlights the chewy, salty bits from the sea with a tangy tomato base and the subtle smokiness from crispy bacon. Pin it to your SOUP BOARD to save for later! Be Sure To Follow Gonna Want Seconds on Pinterest for more great recipes! Avert your eyes, New

Manhattan Clam Chowder, that “other” soup with clams, highlights the chewy, salty bits from the sea with a tangy tomato base and the subtle smokiness from crispy bacon. 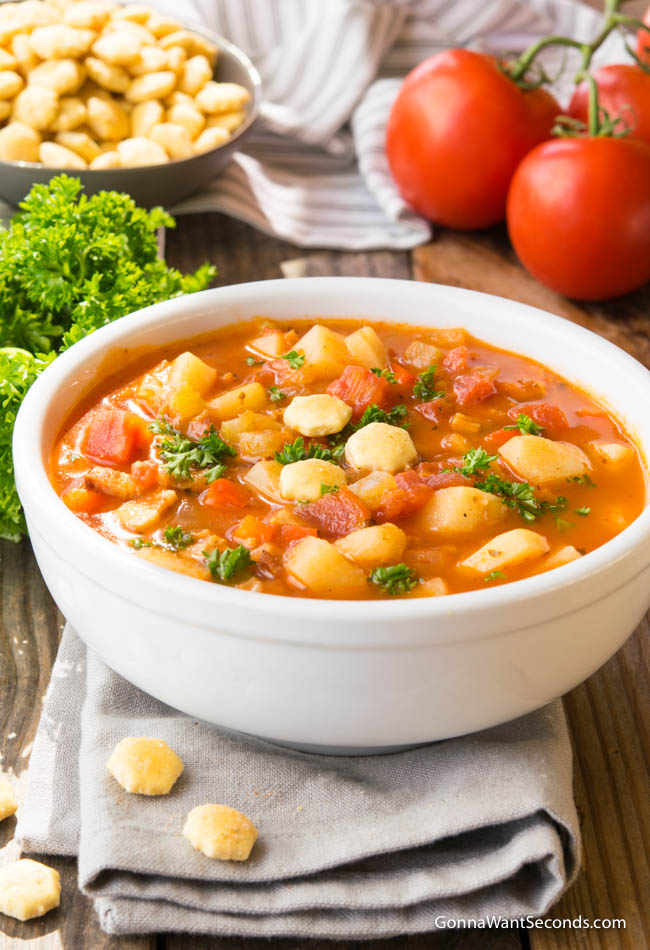 Pin it to your SOUP BOARD to save for later!

Avert your eyes, New England-based readers. I know some of you believe anything with tomatoes in it is no clam chowder at all, but I’m going to offer a little shout out for my Manhattan Clam Chowder.

If you’re willing to give it a try, you just might learn to appreciate this tasty variation!

WHAT ARE THE TWO MAIN TYPES OF CLAM CHOWDER?

You’ll definitely find versions in other areas of the country, too, down the east coast in New Jersey and North Carolina, and the Minorcan chowder (named for the type of clams used) in Florida, as well as versions along the west coast. Some have clear broth, some are served in bread bowls (yum!), but they all highlight the tiny mollusk. 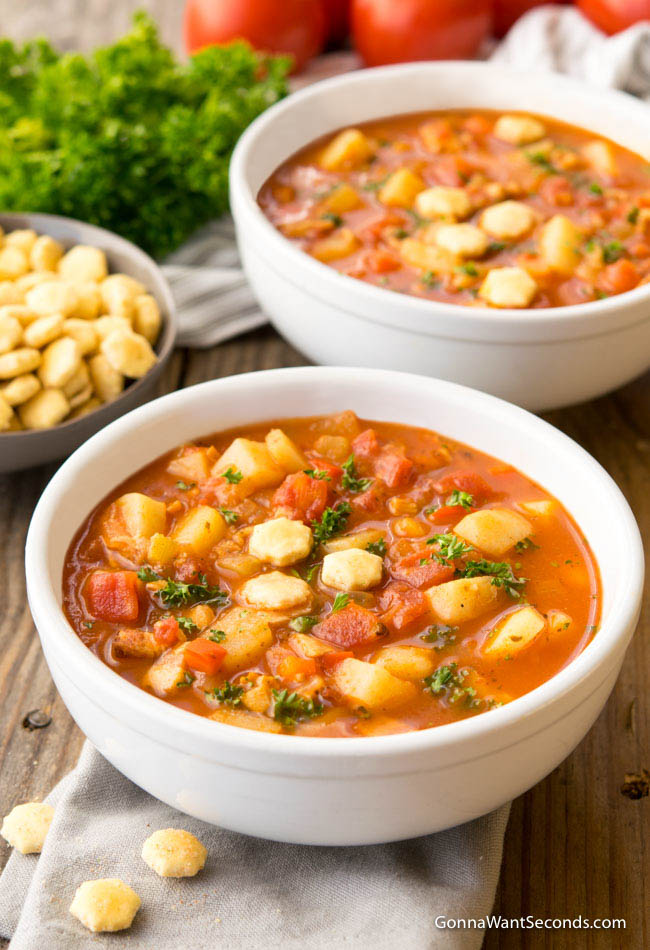 WHAT IS THE DIFFERENCE BETWEEN BOSTON AND NEW ENGLAND CLAM CHOWDER?

Although subtle differences do exist between the clam chowders in the New England area (which includes Maine, Vermont, New Hampshire, Massachusetts, Connecticut and Rhode Island), Boston clam chowder is just another name for the same cream-based version known as New England clam chowder.

The cream-based chowder was definitely invented first, and many New England purists still believe adding tomatoes is sacrilege. According to the Manhattan clam chowder Wiki, there was even a law introduced in the 1930s that would prohibit such an abomination. Thankfully that debate didn’t hold water (or at least tomato juice), and most of us enjoy the step-child, Manhattan Clam Chowder, just as much as the white version.

The thing that makes clam chowder Manhattan style is tomatoes, in the form of paste, sauce, and chopped, so it’s known as a “red chowder.” The New England version is known as white clam chowder.

It’s worth noting you’ll find some blending happening between the white and red chowders on restaurant menus, where chefs add cream to a Manhattan style clam chowder. I suppose that means you can find red, white, or pink chowder depending on where you are!

So, back to my Manhattan Clam Chowder Recipe . . . 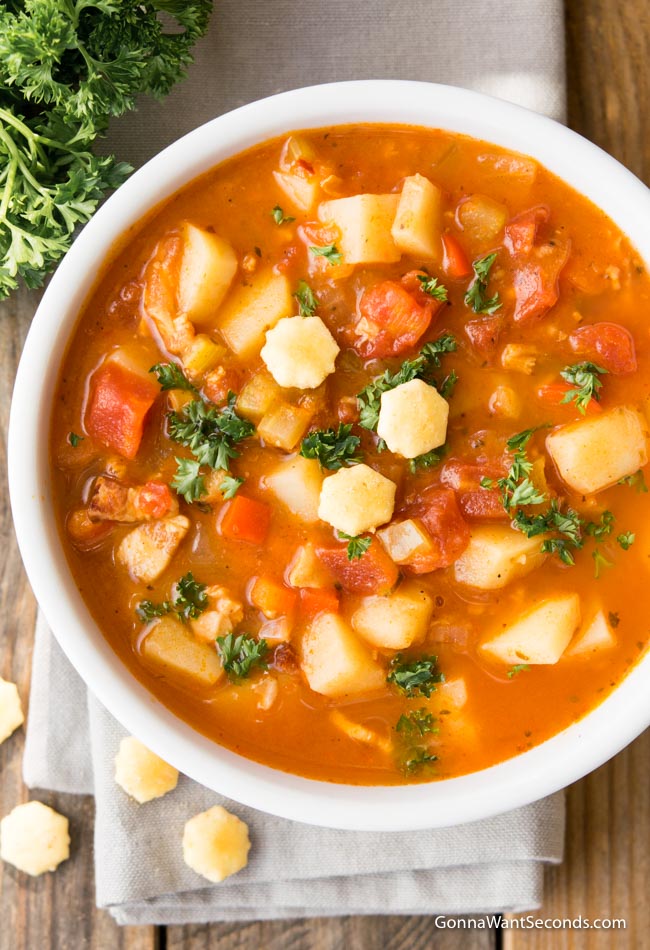 WHAT IS MANHATTAN STYLE CLAM CHOWDER?

Manhattan style clam chowder has salted pork, a few aromatics – usually celery, onions, and a little garlic, with fresh or canned tomatoes, a little tomato paste or sauce mixed with water or stock, potatoes, and, of course, the clams.

Canned clams are often used, though whole, shell-on clams may be cooked directly in the chowder if they’re available.

My easy Manhattan Clam Chowder doesn’t deviate from this formula much, but I think it has just the right consistency, acidity, and overall clam-y quality you’d expect from a really stellar chowder.

The bacon in my recipe adds a lovely smokiness to the dish. Many soup recipes, even those with other types of meat, will start with a pork base.

Depending on the recipe, they may be large pieces (like the sausage in my Chicken Tortellini Soup) or barely discernible bits after everything’s cooked down, but the pork enriches the soup and adds a savory, smoky quality to whatever gets added next.

Some recipes (like the Manhattan clam chowder Martha Stewart makes) use pancetta, a cured but unsmoked Italian bacon, but I definitely prefer the smoked version. As the bacon renders its fat, the aromatics will soak up that subtle smokiness too which adds a depth of flavor that’s discernible even in this tomato-based chowder.

As for the aromatics, in addition to the classic celery/onion/garlic combo, some recipes call for carrots. They do add a subtle sweetness, but I prefer to use a little red bell pepper instead.

It accomplishes the same “sweetening” without the rooty flavor of the carrots, plus they cook more quickly which is a win win.

To ensure a deep, rich tomato flavor I use tomato paste rather than sauce, then deglaze the pan with a little white wine to make sure all the caramelized bits get incorporated. White’s perfect for adding some additional acidity without competing with the bright flavors of the tomatoes. 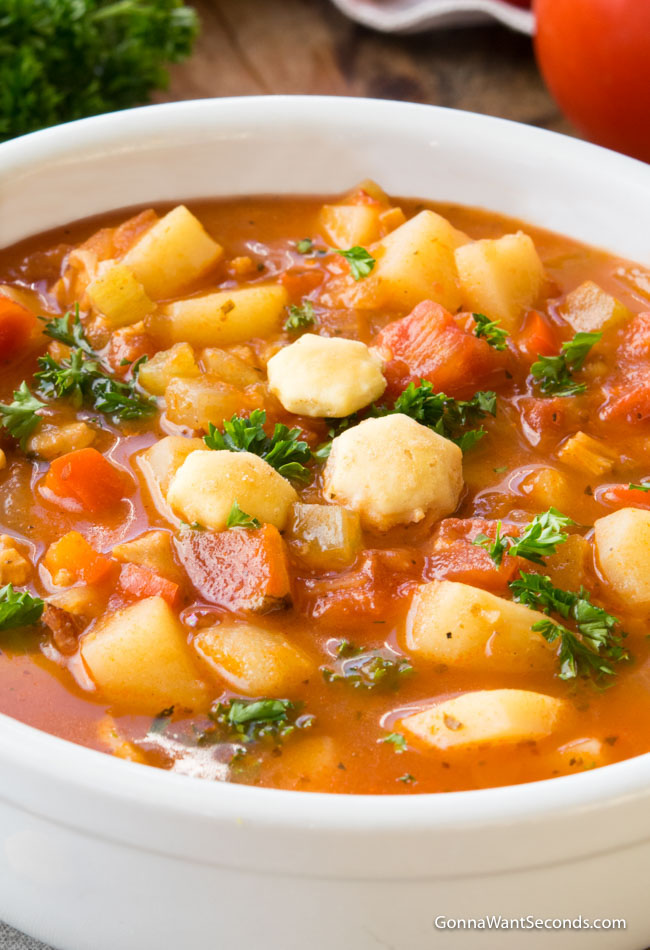 WHAT KIND OF WINE GOES WITH MANHATTAN CLAM CHOWDER?

I like using pinot grigio when I’m making clam chowder since I usually have it on hand, but a sauvignon blanc will work too. Something more full-bodied (hello, oaky chardonnay) will get lost in all the tomato flavors going on, and lightly floral white works much better than something sweet like Marsala or sherry.

Time for some tubers! Russet potatoes are my potato-of-choice, and I add them to many soup and stew recipes like my Vegetable Beef Soup because they have just the right starch content to hold their shape during the cooking process without thickening the dish.

We also need some chopped tomatoes, and I like to use canned rather than fresh here since I know they’re consistently ripe. Rather than just dumping them in straight from the can, I like to give them a rough chop to break up those perfect little cubes into something that looks a little more rustic.

It really grounds the main flavor we’re after here – the salty, briny quality of the clams and obviously compliments the flavors.

Although I don’t enjoy just drinking it by the glass like some people, I do like to keep clam juice on hand as an easy substitute for seafood stock or water in a seafood dish, plus having some in my pantry means I’ll have an excuse for some impromptu brunch-time Bloody Marys!

I like to add a little Italian seasoning, which I really should call my “house-seasoning” at this point, to my Manhattan Clam Chowder, as well as a bay leaf, then it cooks for a few more minutes – just enough time to heat up some bread and get out your bowls. Soup, er, I mean, chowder’s on! 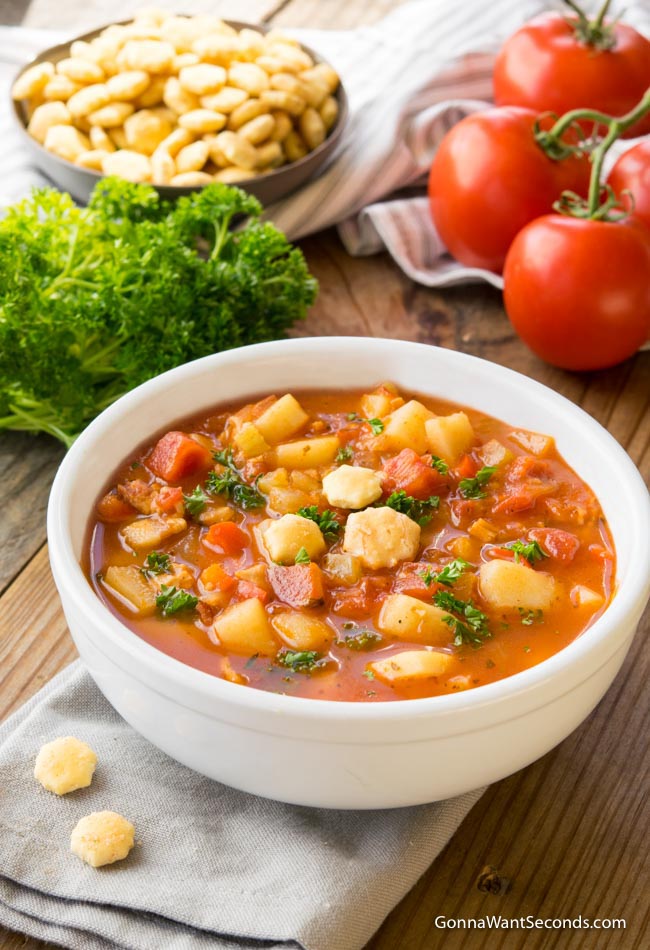 Choice clams – In an ideal world, we’d all have access to fresh clams, but most of us, between availability, time, and expense, don’t have that option. Your seafood market may have frozen clams, which are probably the next best thing to fresh, but they can be pricy.

Canned is the way to go for me, and they work beautifully in this chowder. Just try to look for a brand that has limited ingredients (Cento is a popular one), and definitely steer clear of any smoked clams.

Slow cooker – Sure you can make this Manhattan clam chowder recipe slow cooker style! You’ll need to cook your bacon and saute your aromatics first, then place all the ingredients in the crockpot to cook on low for 6 – 8 hours.

Some recipes suggest waiting until the end to add the clams, then finishing the chowder on high for a few minutes until they’re heated through. You can experiment, of course, depending on how hot your crockpot gets, but I find the clams don’t toughen up when they’re cooked on low. 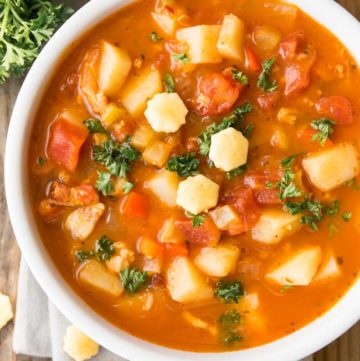