Leftover ham helps create a legendary soup full of hearty, creamy white beans with just a hint of fresh thyme and tender chunks of everyone’s favorite smoky, salty piece of pork.  Soup’s on with my easy-but-exceptional Ham and Bean Soup recipe! Pin it to your SOUPS BOARD to save for later! Be Sure To Follow 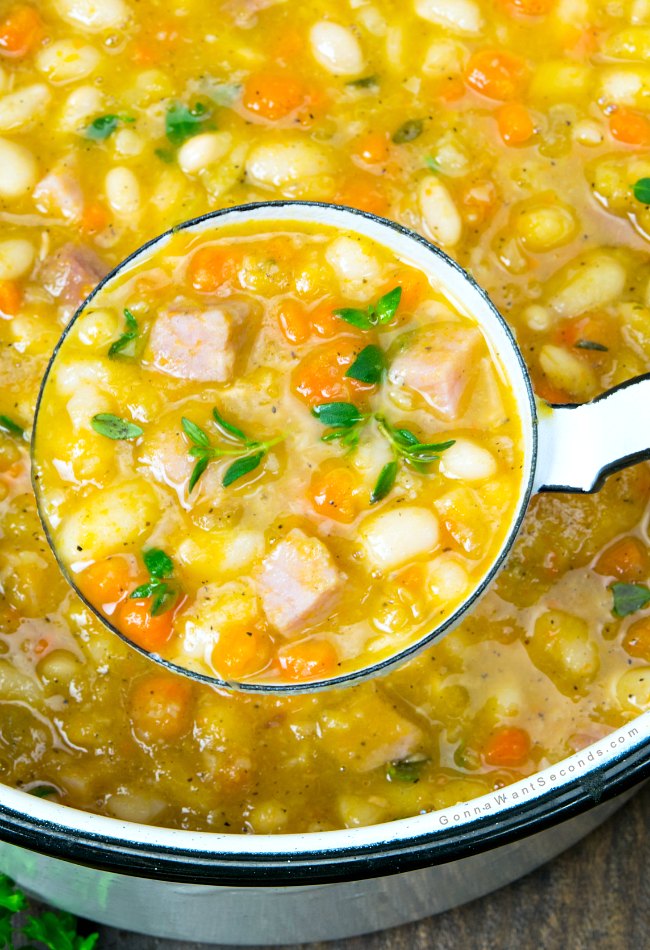 Pin it to your SOUPS BOARD to save for later!

Spending the evening at a fancy restaurant is every foodie’s dream, wining and dining to your heart’s content (at least until the bill comes).

I think we can all agree, though, that being expensive doesn’t necessarily mean something tastes good, and there are some wonderful, inexpensive dishes that can beat the pants off a dainty, five-course meal.

Cheaper cuts of meat often have more flavor than their expensive counterparts; a simple box of pasta can transform a few kitchen staples into an elegant dish; and then there are beans, the most nutrient-dense thing on the planet, that add wonderful texture and flavor to so many dishes. Beans are the new black, and this Ham and Bean Soup showcases them in a flavorful way.

There are literally thousands of varieties of beans around the world, and they all have their own unique color, size, and texture. Some are meaty and dense like the nutty garbanzo, while others, like lima beans, are mild-flavored and soft. They really are “magical” too – protein-rich and full of antioxidants, magnesium, potassium, and other vitamins and minerals (and, botanically speaking, they are technically fruits). They even share their nutrients with the soil, unlike every other cultivated crop, so it’s hard not to fall in love with legumes.

My Ham and Bean Soup capitalizes on the health benefits and overall tastiness of the mighty bean by showcasing them in this warm, beautiful soup.

There are four major types of white beans, and you can really use any of them for this ham and white bean soup: great northern, cannellini, baby limas, and navy (also called “pea beans”).

If you make a ham and navy bean soup (yes, they got their name from being used as a military staple), the beans will break down a little more since they’re the smallest and creamiest of the four.

Baby limas are similar, and they’re a classic pairing with ham, especially in the south.

Since my version of this soup is thicker and less brothy than most other recipes, using one of these two beans will yield the thickest result.

If you make a great northern bean and ham soup or use cannelinis, both of which are bigger options, the beans will hold their shape better. Like practically every bean, these two go well with the smoky, salty qualities of the ham, but the soup itself will be a little thinner and the beans may take a little longer to cook.

Although it’s technically not a white bean, you can also make a ham and pinto bean soup. Pintos have a stronger flavor than their more subtle white counterparts but will leave you with a similar consistency. My personal preference is the smaller bean varieties, so I usually make navy bean and ham soup.

By the way, don’t be shy about adding a little extra water if the soup thickens too much. Leftovers in particular will need to be thinned out during reheating.

The beans definitely provide the texture in this dish, but the ham adds all the flavor!

This soup is one of my go-to recipes when I have leftover ham, particularly if there’s a lonely ham bone calling my name after some Sunday supper. There’s so much flavor naturally in ham since it’s cured with lots of different seasonings, and making a Ham and Bean Soup with ham bone stock really ups the game here.

I honestly think it’s one of the tricks that makes this the best Ham and Bean Soup recipe, since the beans work like little sponges to absorb all the flavor.

If you’ve ever made homemade beef or chicken stock, you know nothing creates a rich stock like meat that’s still clinging to bones. The collagen released from the bones during the cooking process becomes gelatin, which is why some broths, like those for ramen or the bone-broth craze, are thick and viscous and why homemade stocks often come out of the fridge looking like a savory chunk of Jello.

The ham bone here enriches the soup and helps infuse it with tons of ham flavor you just won’t get from tossing in chunks of cooked ham.

I do still incorporate some additional ham chunks at the end (which you’ll want to do too unless you have a particularly meaty ham bone), to make this a really filling meal.

Some aromatics, including a little fresh thyme and bay leaves, are really all you need to accentuate the ingredients in this bean and ham soup. Just make sure you take the time to soften them in the butter so you extract all the flavor they have to offer.

This is definitely a simple, straightforward recipe, but a big bowl of this with a side of jalapeno cornbread makes for one exceptional meal! 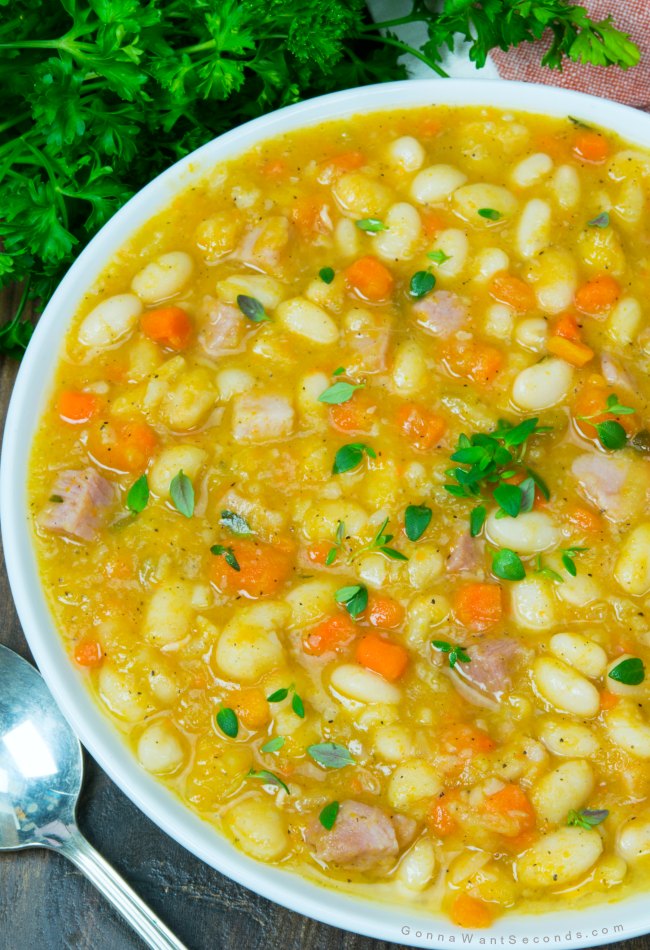 Beans – Just about any dried beans you have on hand will work in this recipe, though they’ll vary in texture and cooking time a bit.  You can even use one of the mixed-bean medleys from the store to make a 15 bean soup with ham if you can’t settle on just one. The only thing I don’t recommend is making this Ham and Bean Soup with canned beans. Obviously they shave off a lot of cooking time, but they won’t get to rehydrate in the flavorful soup liquid.

Quick soak method – If you forget to soak your beans overnight, fear not. Just put your beans in a big pot, cover with a couple of inches of water, then bring to a boil. Boil for about 1 minute, then turn off the stove, cover the pot, and let the beans sit for an hour.  Rinse the beans off with warm water and they’re ready to use! If you do use this method, make sure you use warm water for the cooking step, too since pouring cold water over warm beans can make the skins start to fall off and break down the beans before the cooking process even starts.

Slow-cooker – If you’re like me, your stove and oven may be tasked to the limit with holiday baking. If so, a slow cooker Ham and Bean Soup is just the ticket for an easy supper! If you want to make a Ham and Bean Soup crock pot version, just saute the aromatics in a skillet, then dump everything into your slow-cooker. Cook the soup on low for about 8 hours, retrieving the ham bone/hocks at around the 6 or 7-hour mark so you can remove any ham and incorporate it back into the soup. 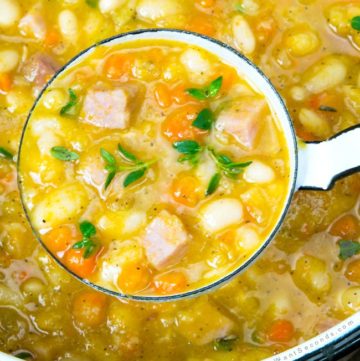