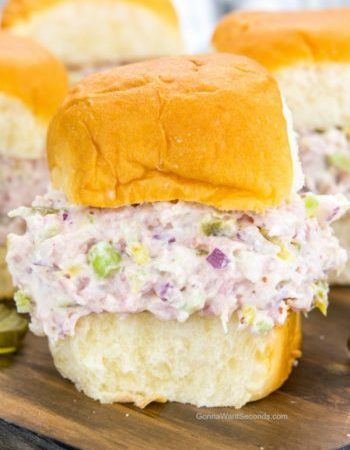 My Ham Salad is a perfectly balanced delight of salty, sweet, and spicy, with smoky bits of ham and a light, creamy base that’s destined to top every cracker on your party buffet. It’s a new and colorful game-changer for your next holiday spread! Pin it to your SALAD BOARD to save for later! Be

My Ham Salad is a perfectly balanced delight of salty, sweet, and spicy, with smoky bits of ham and a light, creamy base that’s destined to top every cracker on your party buffet. It’s a new and colorful game-changer for your next holiday spread! 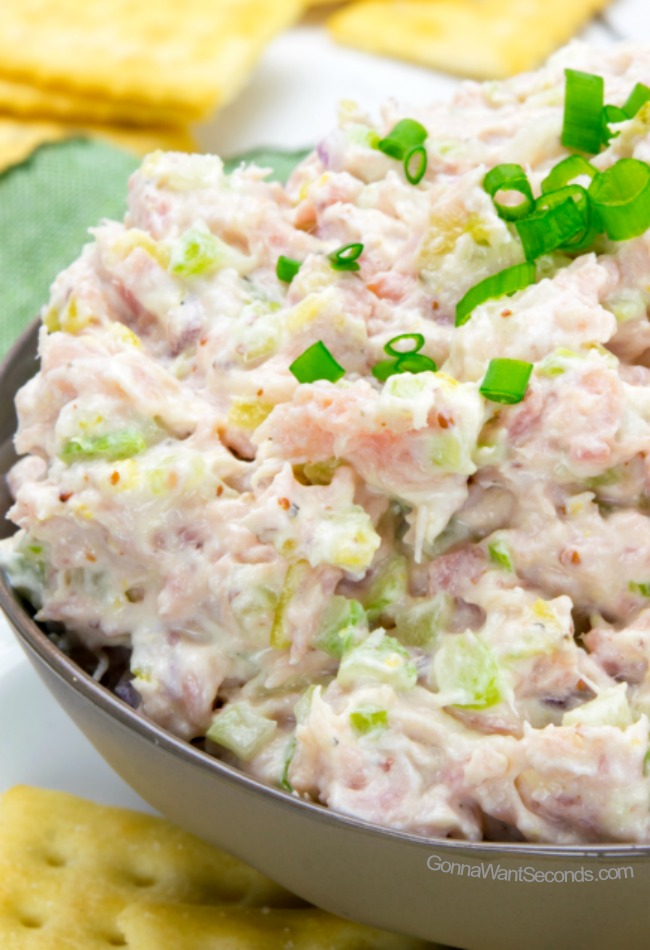 Pin it to your SALAD BOARD to save for later!

Creamy, Crunchy, Salty and Smokey say hello to the most delicious Ham Salad ever to grace the top of a cracker of the inside of two pieces of soft bread!

I’m sure our ancestors who first tossed greens in a bowl and dubbed it “salad” would never, in their wildest dreams, have guessed just how far we’d run with the concept. Sure, we still love a simple bowl of green leafies, but what about creamy pasta salads, refreshing jumbles of fruit, and jiggly, gelatin-encased beauties? We also love deviations that take a meaty direction, things like the classic, grape-studded chicken salad and dilly tuna spread. If you’re not already acquainted, let me introduce you to Ham Salad, the classic pork-lovers’ creation that epically repurposes those smoky leftovers.

All you need is a peek inside school lunchboxes to see just how much we love ham. The hammy sandwich quantities don’t lie, and this Ham Salad is a great way to kick your lunch (or party) up a notch or two. Although I usually associate ham salad recipes with the South, other areas of the country, especially where pork production is high, definitely know how to make ham salad. Of course, each region puts their own creative spin on the dish (including a ham salad made with bologna), and there are similar European dishes that use sausage or other meats. The main ingredients, though, are salty, smoky chunks of the pink stuff, a thick, creamy base made with cream cheese (or mayonnaise or combination of the two), and pickles, either sweet or dill.

Many recipes add boiled eggs to this list of must-haves, like the ham salad recipe Paula Deen makes, but mine is decidedly not a ham salad recipe with eggs. I think the texture competes with the ham, plus it dilutes the flavor a bit, so I leave them out.

My Ham Salad has a slightly chunky texture dominated by the ham, a little crunch from chopped celery and onion, and a flavorful cream cheese base that accentuates rather than hides the flavors of the main star here. My version also has a nice balance of salty and sweet, mainly achieved through careful consideration of the perfect pickle.

Some recipes use dill pickles in this dish which definitely cements it in the “salty” camp. Since dill pickles are naturally salty, though, I think using these in addition to the ham means you need more of the creamy base to offset the salt. The dill is also a really forward-facing herb, so it kinda takes over the flavor profile.

Some recipes, like the Honey Baked Ham salad, belong on the other end of the spectrum, using honey-glazed ham, honey mustard, and sweet pickles. This makes the whole thing a little too sweet for me.

I do use sweet pickles but just enough to complement the ham, along with some Creole mustard to add a little acidity and a nice touch of heat. 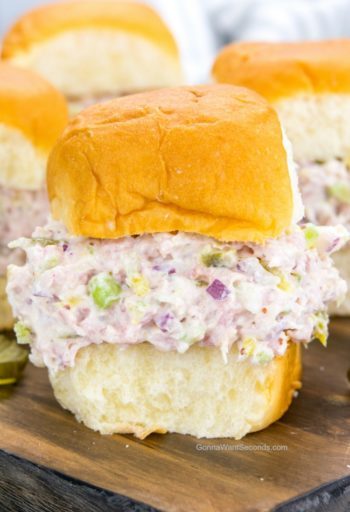 Creole mustard, a popular condiment in Louisiana, is a unique, spicy mustard with a slightly coarser texture than the yellow hot dog stuff and a little more vinegar. (It’s one of the main ingredients in remoulade sauce, if you’ve ever tasted that magical stuff). You should be able to find Creole mustard in your grocery store, but you can substitute another coarse, spicy mustard with similar results.

Speaking of heat, there are some deviled ham salad recipes that crank up the sweetness (often accentuated with cloves) and balance it with plenty of hot sauce, cayenne, or pickled jalapenos. These ingredients are all wonderful (and I do love spicy), but it’s just more flavor competition and I really want this salad to be all about the ham.  The other salad ingredients are chosen with that goal in mind.

My creamy base is cream cheese to bind the ham chunks but not let them get lost in it. Both add a nice tang to help preserve that careful salty/sweet balance.

Red onion adds color and crunch, along with a little heat. If they’re a little too hot (which your eyes will let you know pretty quickly), you can always rinse the onion bits under cold water and drain them really well to remove some of the nose-stinging qualities.

I’ve also substituted chopped green onions with great results. Celery adds a lovely crunch as well, along with a freshness that cuts through some of the richness of the ham and cheese.

I like to fold in the ham after everything’s mixed well to preserve the little chunks. Texture is important here! Ham Salad does benefit from a little chilling time in the fridge, but you can serve it right away. It’s an inexpensive, easy addition to any party spread that’ll be so popular you’ll need a few extra boxes of crackers on standby! 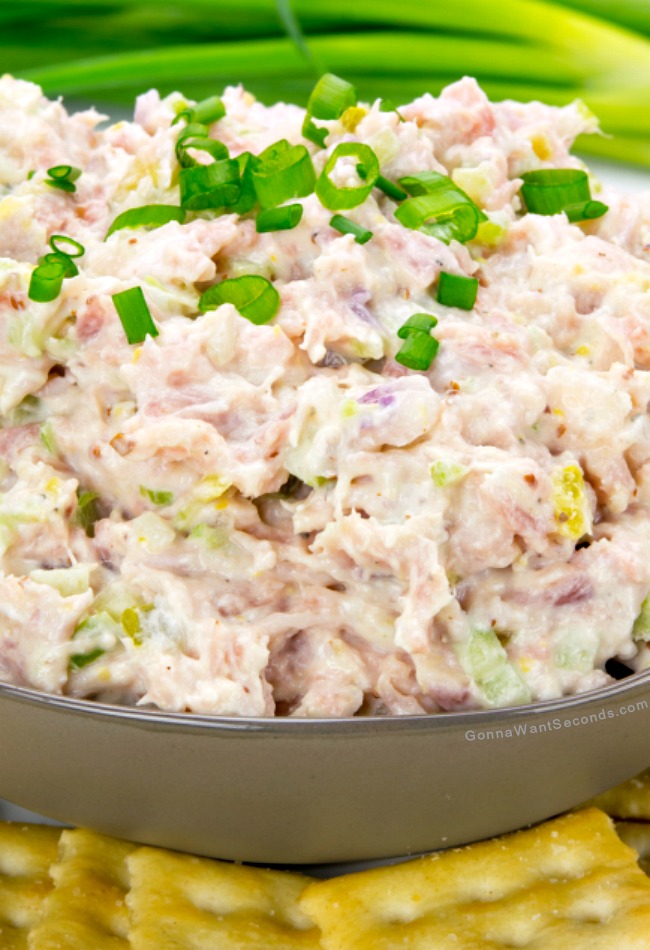 Salad vs. Spread – Although I do use the food processor to help chop the ham, I like my Ham Salad to have some texture, like the ham salad recipe Southern Living has on its website.

I know some people prefer to run all the ingredients through the food processor until things are really smooth, essentially making a ham salad spread, but I just don’t roll that way. If that’s your preference, though, by all means please pulse on!

Btw-I realize that the Ham Salad looks really smooth in the photos. Honestly, it’s not as smooth as it looks. I think the he cream cheese is giving it a smoothed out appearance!

Serving options – I usually serve this with butter crackers or small toasts, but you can serve it in endive “boats” like the ham salad recipe Pioneer Woman makes or with some other crudite.

You can also use it to make sandwiches, either cold with some arugula or watercress or hot like the ham salad sandwich recipe Taste of Home publishes (heated in the oven along with some Velveeta slices).

Since soup is a popular meal this time of year, why not make a rolled, grilled cheese version?

Just cut the crusts off bread slices, flatten them with a rolling pin, then spread on your Ham Salad. Add a slice of American cheese or a little shredded cheddar, then roll it up. Brown it in a frying pan just like you would a grilled cheese, rolling it around until it’s toasty on all sides. 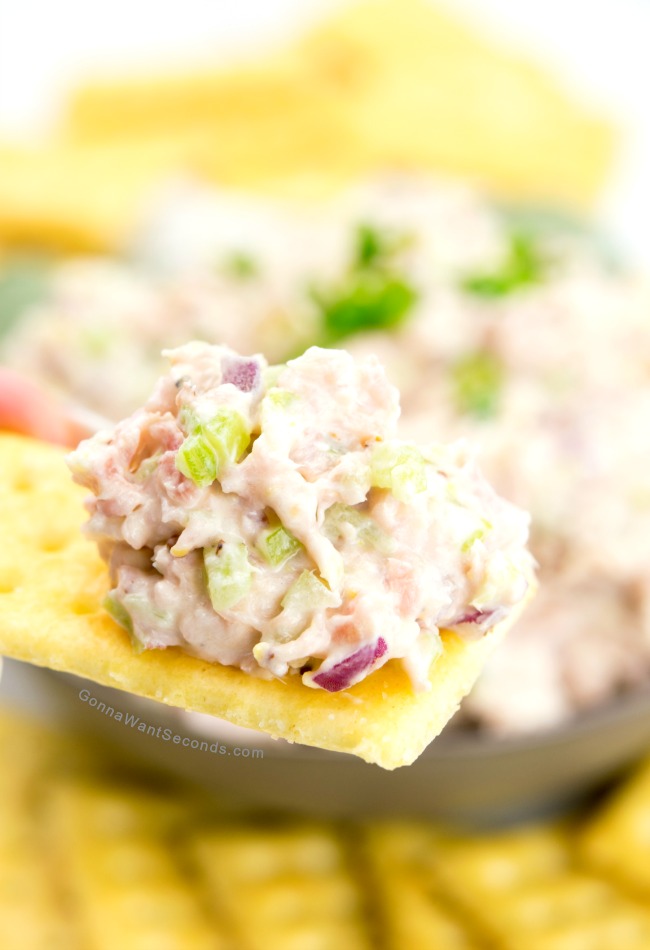 Lighten Up – If you go the veggie route for serving this dip, you’ll definitely save some calories.

You can also turn this into a healthy Ham Salad recipe by substituting low fat cream cheese and mayonnaise or using a combination of low fat cottage cheese and plain yogurt processed in your food chopper until the consistency is similar to softened cream cheese. 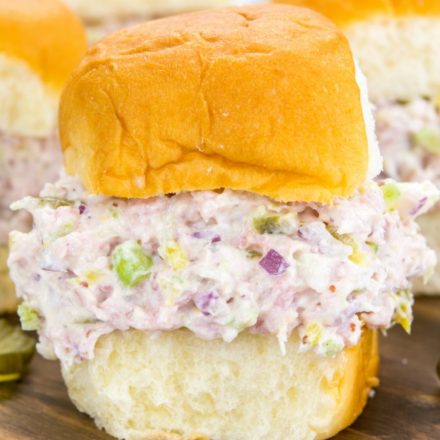 My Ham Salad is a perfectly balanced masterpiece of salty, sweet, and spicy, with smoky bits of ham and a light, creamy base that’s destined to top every cracker on your party buffet. It's a new and colorful game-changer for your next holiday spread!
Prep Time10 mins
Total Time10 mins
Servings: 8 People
Author: Kathleen