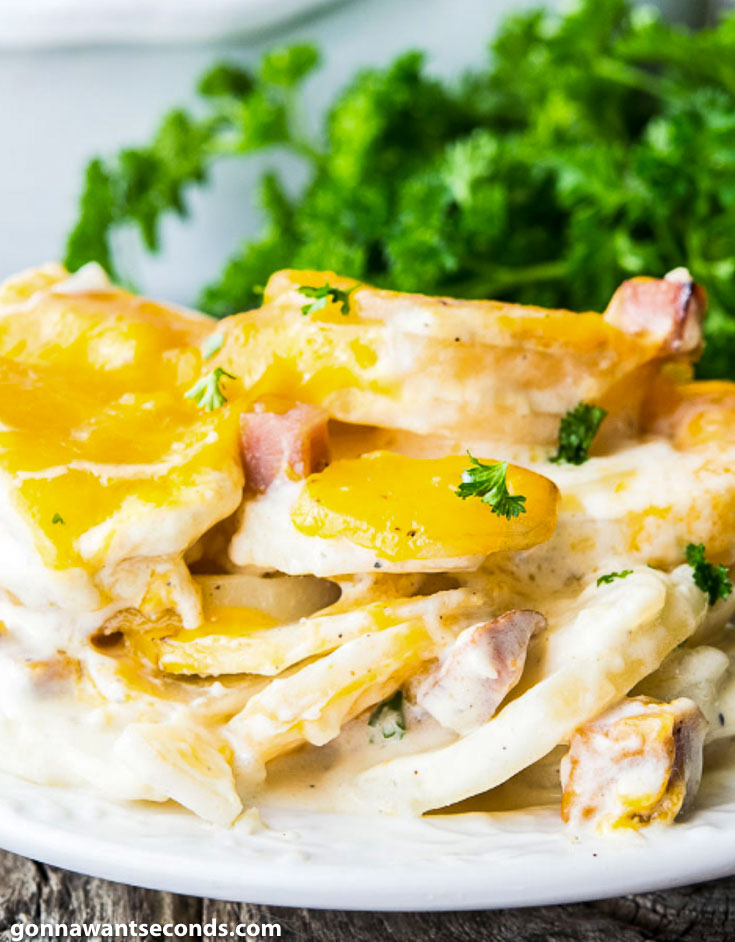 Scalloped Potatoes and Ham remind me of cozy nights around the dinner table with family and friends. The recipe is traditional for me in every sense of the word, whether I am whipping it up for a holiday gathering or a comforting meal on a cold night. My recipe is just as wonderful as my Easy Cheesy Scalloped Potatoes but is made with ham (obviously) and russet potatoes instead of cubed hash browns. Scalloped Potatoes and Ham is requested frequently, so I keep the ingredients on hand at all times. Now that you’re dying to learn more about this oh so popular recipe of mine, let’s get to it!

WHAT I LOVE MOST ABOUT THIS RECIPE:

What Are Scalloped Potatoes and Ham?

Cheesy scalloped potatoes and ham are a wonderful, cheesy casserole that is made up of perfectly cooked russet potato slices along with tender ham, and topped off with a gooey cheddar cheese sauce. Oh, it’s so good. I’ve never met anyone who has not tried this at least once in their lives, but if you haven’t had it, this recipe is the best place to start! Also, it goes wonderfully with wine. Just throwing that out there.

SAVE THIS SCALLOPED POTATOES AND HAM

TO YOUR SIDE DISH OR DINNER BOARD FOR LATER 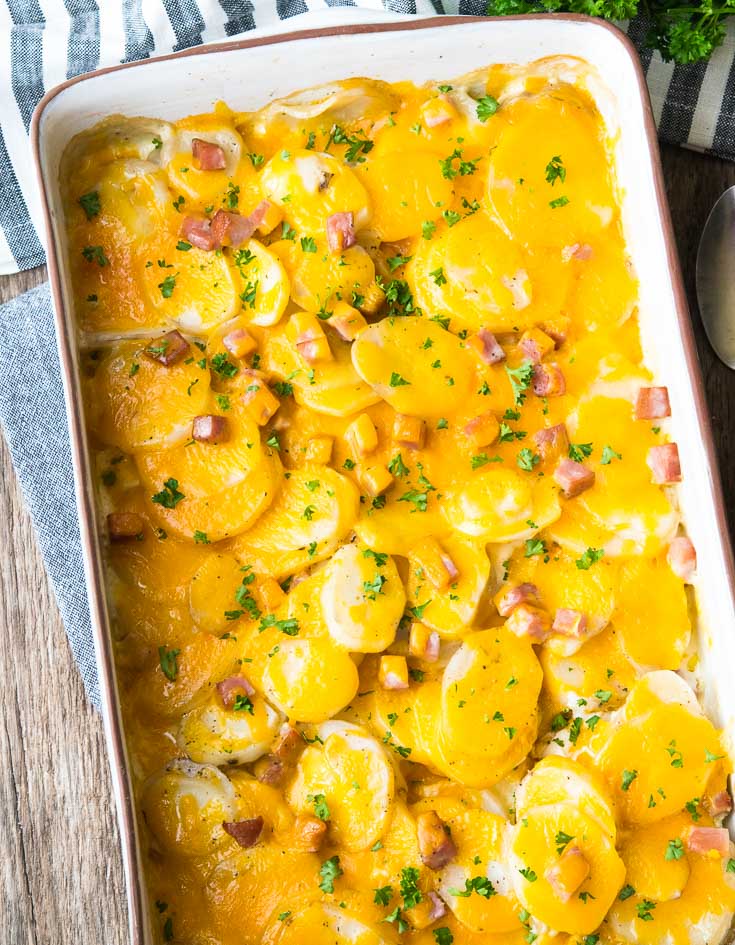 What Ingredients Do You Need To Make Scalloped Potatoes and Ham? 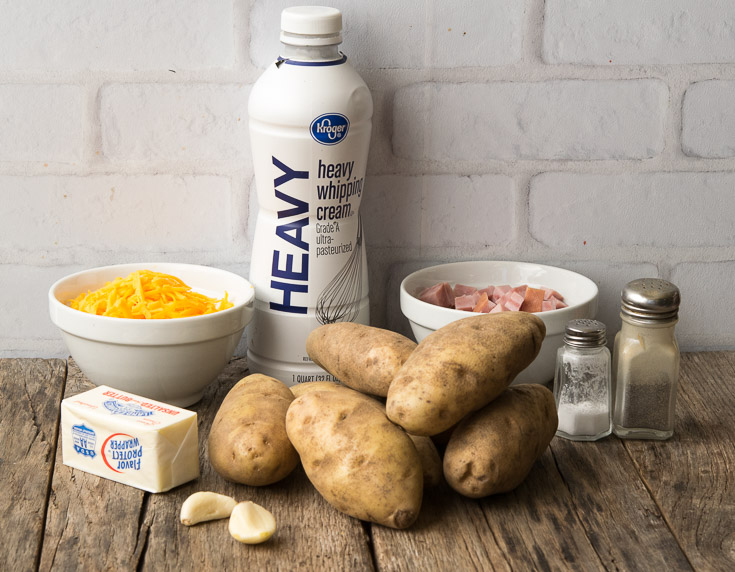 How Do You Make Scalloped Potatoes and Ham?

Ah, the burning question – how to make this scalloped potatoes and ham feast. Preheat the oven and prepare a 9×13 baking dish. In a saucepan heat the cream with salt and pepper – set aside. Spread 1/2 of the potatoes and ham in the 9×13, pour 1/2 the sauce over it. Repeat another layer. Sprinkle it with a little black pepper, and then pop the whole shebang in the oven. When your sauce is lookin’ bubbly, remove from the oven and top it with lots of grated cheddar and return to the oven until the cheese is gooey and melted, and potatoes are golden brown. Hashtag drooling. 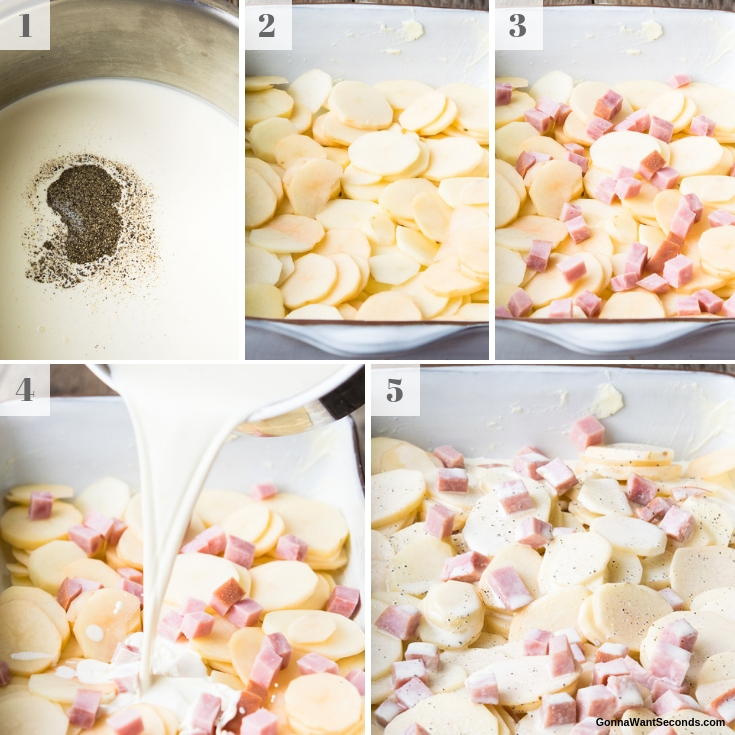 Step By Step: How To Make Scalloped Potatoes and Ham

1. Preheat oven. Butter the sides and bottom of a baking dish with butter and garlic. In a saucepan, heat cream, salt, and pepper over medium heat. Set aside.
2. Layer the half of the sliced potatoes in the baking dish.
3. Add half of the diced ham.
4. Pour half of the heavy cream over the potato and ham layer. Repeat with the rest of the ingredients.
5. Sprinkle extra black pepper on top. Loosely cover with aluminum foil and bake. Remove from oven, then sprinkle cheese evenly on top. Bake until cheese is melted and golden brown.

How Do You Make The Sauce for Scalloped Potatoes?

In a saucepan, heat the cream, salt, and pepper over medium heat, stirring to dissolve salt, until bubbles form around the edges. 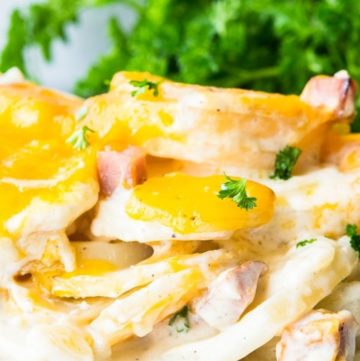 Heavy Cream: Heavy cream is used in my recipe for added thickness, richness and an incredible flavor. If you want to lighten it a bit, you can sub the heavy cream for more whole milk, but it’s entirely possible that your consistency will be off. 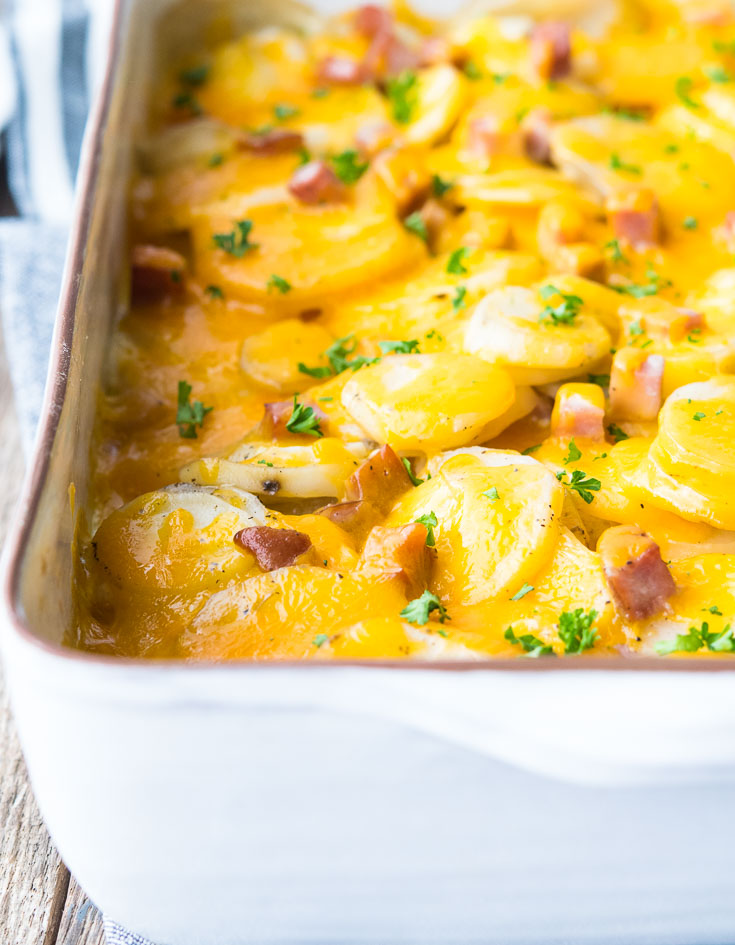 I hope you LOVE this recipe as much as I do! Because I adore them so much I have quite a few recipes for them. If you’re looking for a great switch up, try these Boursin Cheese Scalloped Potatoes or Easy Cheesy Scalloped Potatoes. I’ll be sharing more so please stay tuned! ♥

Can You Make Scalloped Potatoes and Ham Ahead of Time?

Yes, of course, you can!  I like to make it in its entirety and then hold off on baking. Before it’s time to go in the oven, I cover it tightly and place it in the fridge, no longer than 24 hours. When you’re ready to bake it, preheat the oven and bake that perfect cheesy scalloped potatoes and ham casserole until bubbly. Remove from the oven, sprinkle cheese (again, lots of it) evenly over the top and pop it back in until melty. You can also make it in the slow cooker! My incredible recipe for Crockpot Scalloped Potatoes and Ham is coming soon!

How Do You Freeze This?

Scalloped potatoes with ham and cheese is actually easy as heck to freeze. You can freeze your leftovers by placing them in a freezer safe container and tossing them in the freezer. Portion as you like and take them out when you’re ready to thaw and heat! You can also make up a big old batch, and then freeze them (without cooking) flat in Ziploc bags! Easy storage, and a great meal to freeze for a future occasion. Just be sure to thaw safely! 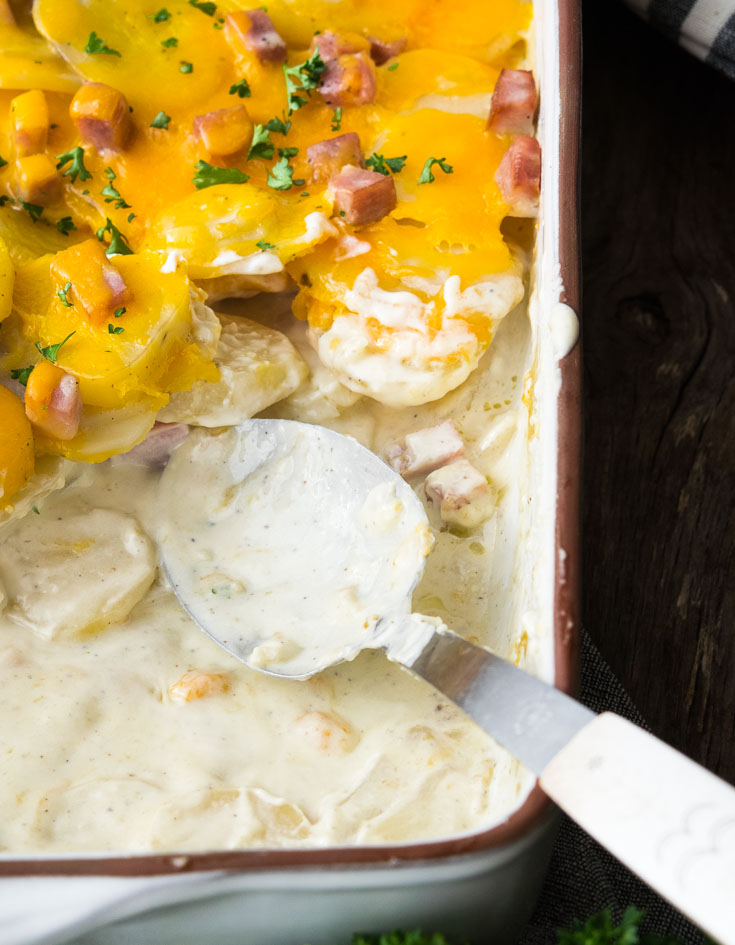 What Do You Serve With This Recipe?

Following in the footsteps of the popular Betty Crocker scalloped potatoes and ham, my recipe, though different, works wonderfully as a main dish. I like to serve it up with warm buttermilk rolls, a crisp green salad…or steamed veggies!

What Is Scalloped vs. Au Gratin?

What Cheese To Use?

As long as it has some flavor, you’ll find that you can use most cheeses in this recipe. Use anything from Monterey Jack to Gruyere, but cheddar is preferred. Pioneer Woman scalloped potatoes call for a nice, sharp cheddar and I have to agree. It is delicious in this recipe!

How To Boil Potatoes

It might not seem like it, but the way you boil potatoes can make a difference in how they taste after the fact, as well as the difficulty in cooking! To get the best out of your potato boiling experience, you’ll want to start with using potatoes close in size so they cook through at the same rate. Next, leave the skins on! This will prevent mushy potatoes. Use waxy potatoes like red or Yukon gold. A waxy potato holds its shape and has a creamy consistency. Start with cold water in the pot and bring it to a boil. Finally, boil them uncovered. Which potato should I use? 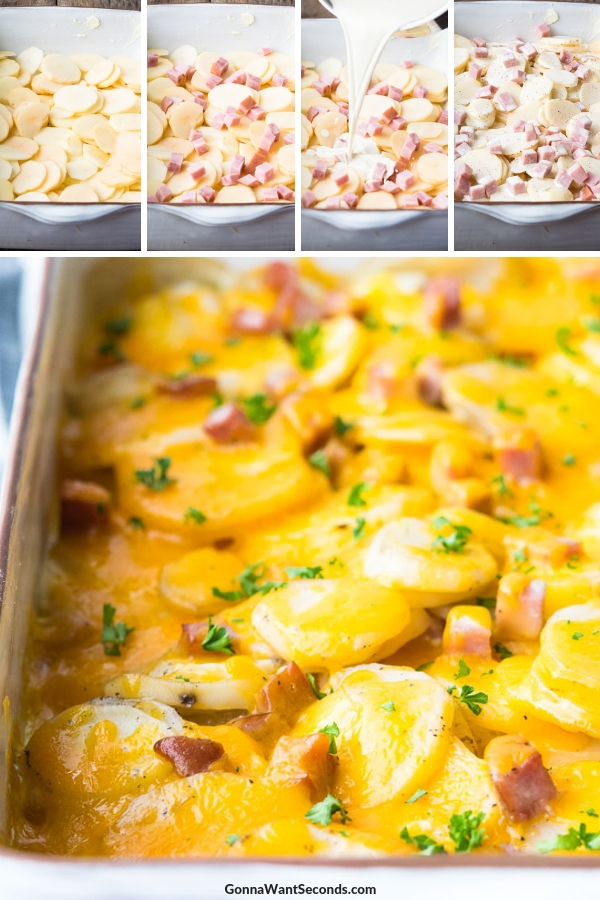