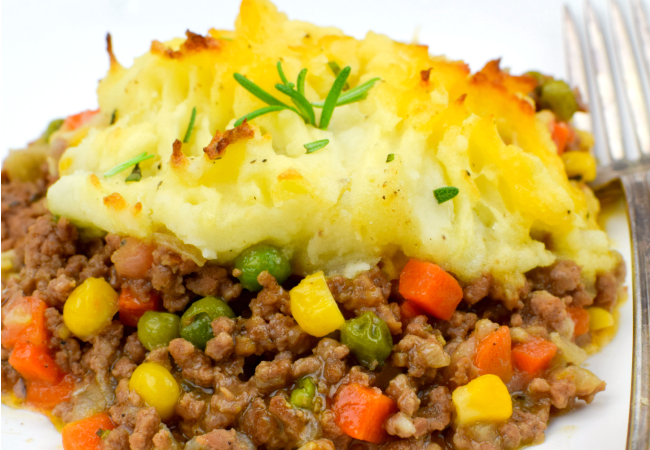 Shepherd’s pie is an incredible comfort food. Delicious, super flavorful meaty filling topped with a mound of rich, buttery mashed potatoes! Pin it to your CASSEROLE BOARD to save for later! Be Sure To Follow Gonna Want Seconds on Pinterest for more great recipes! I spend a lot of time in my kitchen experimenting with 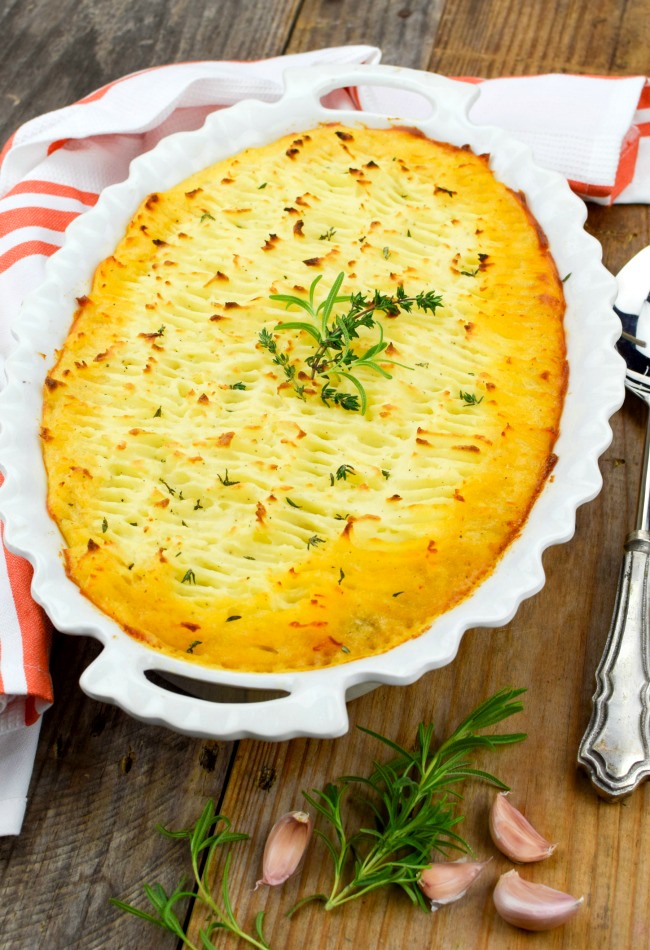 Pin it to your CASSEROLE BOARD to save for later!

I spend a lot of time in my kitchen experimenting with food and researching techniques and ingredients to find just the right combination of flavors for a share-worthy dish.

Usually that process involves making my own tasty revisions to an existing recipe. A simple tweak or two might do the trick, or the changes might be significant.

Sometimes, though, I find recipes that really hit the mark as-is, where it’s clear the person who developed the recipe took the same care I do to create a standout dish. As the saying goes, “Why mess with a good thing?”

Alton Brown’s Shepherd’s Pie is one of those recipes.

Unless you were raised by vegans or on an otherwise deserted island, you’ve at least heard of Shepherd’s Pie.

What you may not know, though, is that it’s actually the younger sibling of Cottage Pie and that you may have been using the wrong name all this time!

Shepherd’s Pie and Cottage Pie are often used interchangeably to describe the same dish, but there is a difference, and it’s a meaty matter. Recipes for Cottage Pie appear in Scotland during the 1700s as a peasant dish made with beef. These farmers, who often lived in modest “cottages,” used their leftovers du jour to create this inexpensive and simple dish.

Shepherd’s Pie, which doesn’t appear in Scottish/English cookbooks until the late 1800s, specifically refers to a dish made with lamb.

Whether you were in the beef or mutton camp, a traditional Shepherd’s pie would include little more than meaty leftovers in a rich homemade bone broth, with a blanket of fluffy potatoes tucking in the hearty filling before crisping in the oven.

Shepherd’s Pie began to appear in cookbooks on the U.S. side of the pond in the early 1900s, and American cooks put their own creative spins on the dish, using less traditional (sometimes controversial) vegetables like corn, as well as different herbs and wine to intensify the flavors of the filling, sometimes adding cheese or other ingredients to the potato layer.

Alton Brown’s recipe is a true Shepherd’s Pie, with ground lamb as the expected focal point of a simple but flavorful dish. He uses chicken broth rather than a heavier beef stock to allow the flavor of the lamb to come through.

A touch of acidity from the tomato paste balances the underlying sweetness of the carrots, corn, and peas, and the filling is seasoned with fresh rosemary and thyme, traditional herbs that enhance the earthiness of this dish.

He tops it all off with a dense mountain of mashed potatoes, incorporating an egg yolk with the butter and half-and-half for an extra creamy topping. (By the way, egg yolks are a great addition any time you make mashed potatoes – trust me. Try it.) All these textures and flavors with a touch of history to combine for recipe perfection. 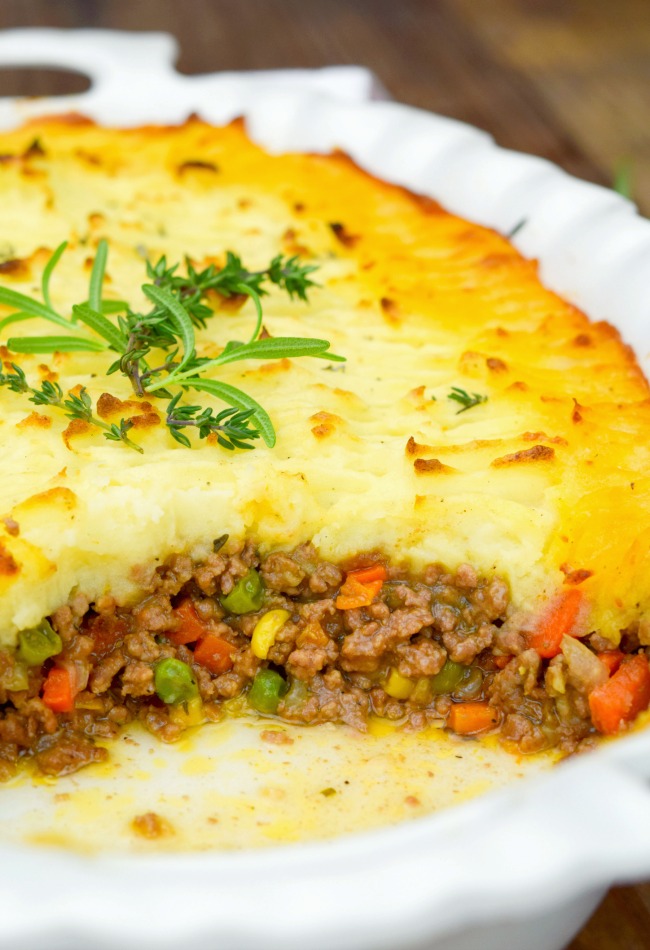 Draining the Meat- you want there to be some fat in the finished meat and veggie mixture but not an excessive amount. The exact amount you have will be dependent on the amount in the ground meat you use. I Do Not drain the meat on paper towel but rather, move the meat to one side of the pan and carefully, with the heat OFF, tip the skillet so the fat rolls to the edge of the skillet, then sop up the excess fat with paper towel and leaving a few teaspoons of the fat. This way some of the fat remains in the meat and will mix with the flour to thicken the filling.

Freezing – This dish can be a bit time consuming to make, so you might consider getting the most out of your efforts by doubling your best Shepherd’s Pie recipe (or Cottage Pie) to freeze a batch for another night.

There can be some texture changes when you freeze potatoes, so it’s best not to bake the dish before freezing. Simply prepare the filling, top with potatoes, and cool it completely before wrapping it carefully and placing it in your freezer.

You should thaw it overnight in the refrigerator before baking as directed in the original recipe, approximately 30 minutes, noting that you may need a few additional minutes of cooking time to make sure the filling is heated all the way through. If you don’t have time for overnight thawing, place the dish, covered in foil, in a 350-degree oven for about an hour, to achieve similar results. (Make sure the baking dish you’re using can go from freezer to oven. Aluminum foil pans are great for this purpose.)

Some recipes, like the version of Shepherd’s Pie Gordon Ramsay developed, suggest gilding the lily a bit by topping the mashed potatoes with Parmesan cheese, and if you choose to do that, you should add the cheese right before this final baking (not before freezing).

Vegetarian/Vegan Options – Another interesting change in these recipes over the years has been to accommodate the restrictions of those on plant-based diets. This vegetarian/vegan great-great-grandchild of Shepherd’s Pie is called a Shepherdess Pie and is a great alternative for herbivores and carnivores alike.

To make Shepherd’s Pie vegetarian without sacrificing the richness and flavor of the original dish, chefs incorporate unique vegetables with interesting textures, such as lentils and mushrooms, and “beef” up the flavor with Worcestershire sauce, interesting spices, and red wine.

The vegan Shepherd’s Pie Jamie Oliver shares, for example, includes chickpeas and substitutes a sweet potato mash for the traditional Russet potato topping. He also adds a sprinkling of bread crumbs to toast on top for added crunch, which, as you might suspect, changes the name of this dish again. Behold the Cumberland Pie. 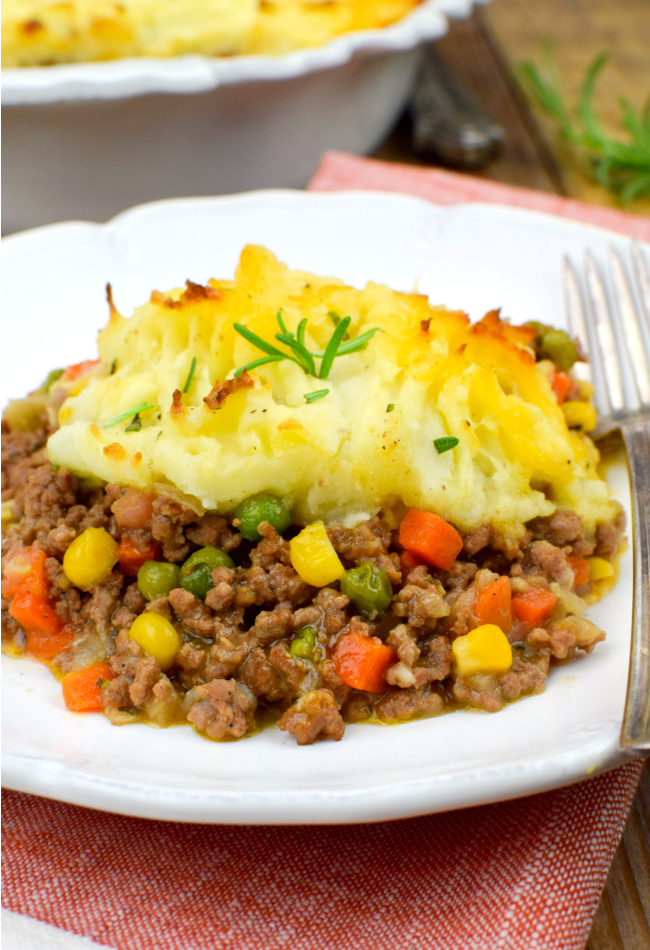 Mashed Potatoes – Alton Brown’s Shepherd’s Pie recipe calls for Russet potatoes, and as I’ve mentioned in other recipes, I’m partial to using those in any dish that calls for a starchy tuber.

Yukon gold would substitute well here, though, if you just happen to have those on hand.

While some recipes smooth out the potatoes on top, I suggest roughing up the surface a bit or using a piping bag with a fluted tip, since those thinner sections of potatoes will dry out and crisp a little faster for extra crunchy goodness.

If you’re a mashed potato addict, you can make extra to line the bottom and sides of the casserole dish too. Jamie Oliver’s non-vegan version of Shepherd’s Pie provides instructions for preparing the potatoes and your baking dish to create this Shepard’s Pie-stuffed-mashed-potato-madness. For those on the opposite end of the carb spectrum, mashed cauliflower would make a great Paleo alternative.

Easy Shepherd’s Pie – Although the end result of toiling away in the kitchen preparing Alton Brown’s Shepherd’s Pie is rewarding, sometimes taking a few shortcuts can make this a more manageable dish for busy home cooks.

The obvious time-consuming step is creating your own stock. Canned versions, or substitutes like Better than Bouillon, work as viable substitutes.

Dried herbs and frozen vegetables can be used to cut down on prep time, and pre-made mashed or frozen potatoes can be used in a pinch, though some flavor and texture may be lost.

Impossible Cheeseburger Pie ~ You won’t believe how quickly this delicious, hearty pie comes together. Oh, and no need to hassle with making a crust for this recipe.

Parmesan Crusted Chicken~ This is one of the EASIEST and most delicious chicken recipes EVER! Moist, tender cheesy baked chicken every time.

Porcupine Meatballs ~ These super easy meatballs are made with beef and rice then simmered in a delicious tomato sauce.  Always a family favorite!

Million Dollar Spaghetti  ~ This Spaghetti Casserole is super easy to put together and has a center layer of creamy, gooey cheese. This is one of my favorite ways to serve spaghetti and people just can’t get enough of it!

Beefaroni ~ Easy Homemade Beefaroni is perfect for the simplified flavor palates of kids. So much better than anything from a can! Quick and Easy–Ready in less than 30 minutes! 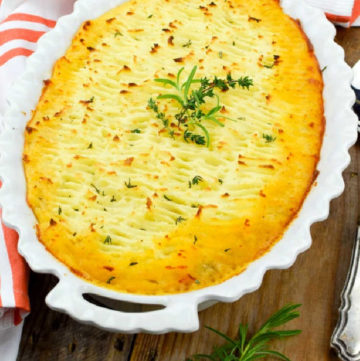