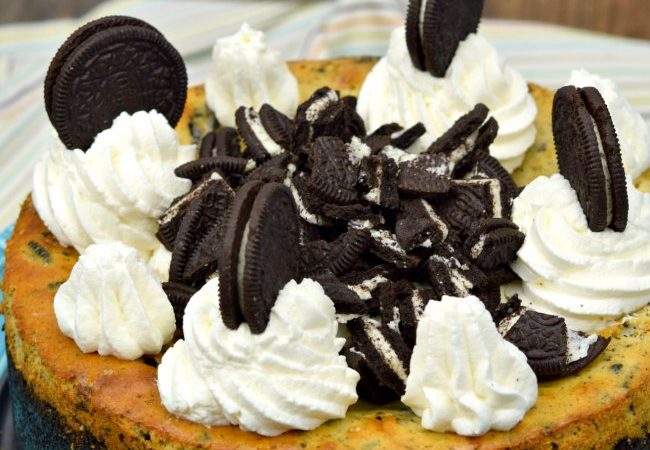 The simple perfection of a classic Oreo cookie combines with the rich decadence of a cheesecake to make this show-stopping dessert. My Oreo Cookie Cheesecake is guaranteed to bring back fond childhood memories of milk and cookies even though you’re going to need a fork this time! Pin it to your CAKE BOARD to save

The simple perfection of a classic Oreo cookie combines with the rich decadence of a cheesecake to make this show-stopping dessert. My Oreo Cookie Cheesecake is guaranteed to bring back fond childhood memories of milk and cookies even though you’re going to need a fork this time! 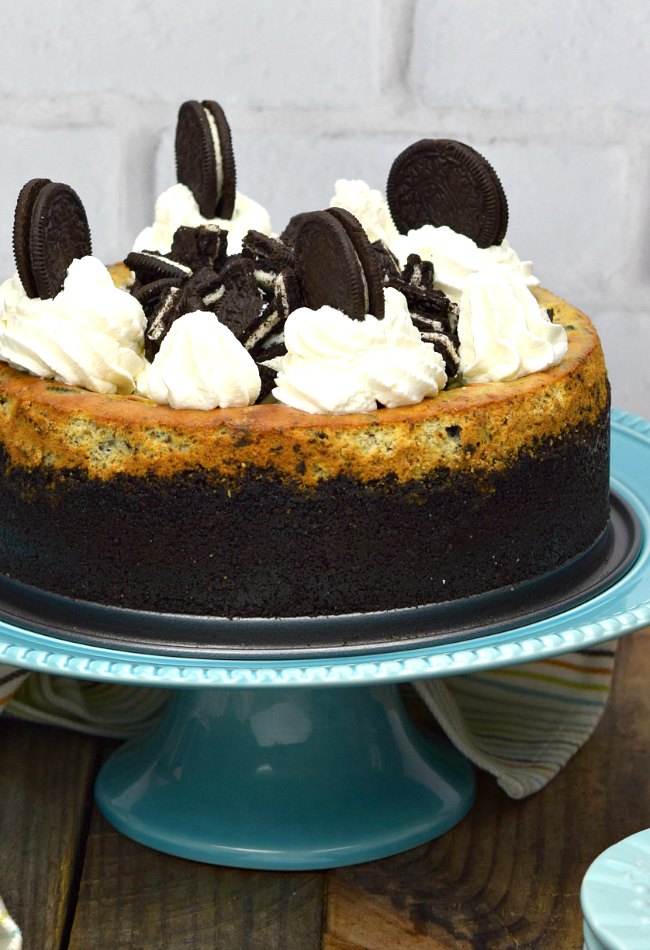 Pin it to your CAKE BOARD to save for later!

Few snack foods fill me with nostalgia like Oreo cookies. I enjoyed them as a little girl and then later shared them with my own children. What’s not to love about that signature sweet “stuff” sandwiched between two crispy chocolate cookies? I’d argue that the act of eating them is even a workout, well, for your brain, at least, making all those important decisions: eat the sandwich whole? Split it apart and lick out the filling? To dunk or not to dunk? Of course, a generation later there are tons of other flavor combinations (mmm, Birthday Cake), but there’s nothing that compares to the original. After all, it’s the original version that inspired this Oreo Cheesecake recipe I’ve been making for over 25 years. Needless to say, it was my son’s favorite dessert when he was little, and, as a good mother, I did my best to keep him from eating the whole thing. 🙂 He definitely thought it was the best Oreo Cheesecake recipe, so I want to share it with you.

Everyone’s favorite cookie sandwich has been around since the early 1900s and has undergone several changes over the years, from different owners/distributors to doubling its classic “stuff,” plus those flavor variations I’ve already mentioned, but Oreos still reign supreme.  They make up roughly one-third of cookie sales in the United States, and they’re the top-selling cookie in the world. Guys, Oreos have more likes on Facebook than Starbucks. Just sayin’.

The first cheesecake? Well, it’s rumored that athletes in Greece were served cheesecake, made with some ancient curdled milk product, at the first Olympic games as an energy boost. That gives us all a free pass to eat cheesecake whenever we’re in need of a little pick-me-up, don’t you think? The signature ingredient, cream cheese, is an addition originating in the U.S., so it’s really our patriotic duty to enjoy cheesecake as often as possible. J

This is a baked Oreo Cheesecake recipe because there’s just no other substitute when you’re craving the thick, dense texture of a classic cheesecake. The Oreo Cheesecake recipe no bake option is great when you’re either rushed for time or just want something lighter and fluffier. Crusts vary, but they’re typically made with cream cheese and whipped cream or Cool Whip, maybe even some sweetened condensed milk. When it comes to cheesecake though, I don’t mess around – I want to indulge in a slice of the cool, velvety luxury that is only accomplished with the baked variety.

What do you use for an Oreo Cheesecake crust? Cookies, of course, and I make my Oreo Cheesecake Recipe tasty by using as many of the classic cookies as possible. Mimicking the construction of the cookie itself, I sandwich the rich and creamy cheesecake between a crispy Oreo crust and a thick layer of more cookies on top (with some whipped cream in there, of course, because I can J). It’s similar to the Cheesecake Factory Oreo Cheesecake recipe in that respect, but mine maximizes the cookie quotient.

I know some of you are balking at the thought of a cheesecake, intimidated by spring-form pans and scared of the dreaded cracking, but trust me. This is an easy-to-assemble masterpiece with easy-to-find ingredients you’ll be able to whip up easy peasy. You’ll notice I even included a couple of tablespoons of flour in the cheesecake filling, which helps stabilize the batter at creamy perfection and helps prevent cracking. The biggest hurdle in making this recipe will be waiting patiently while it chills in the frig. After that, though, you’ll be savoring that first bite, eyes closed, so happy a simple childhood treat made its way into a sophisticated adult dessert. 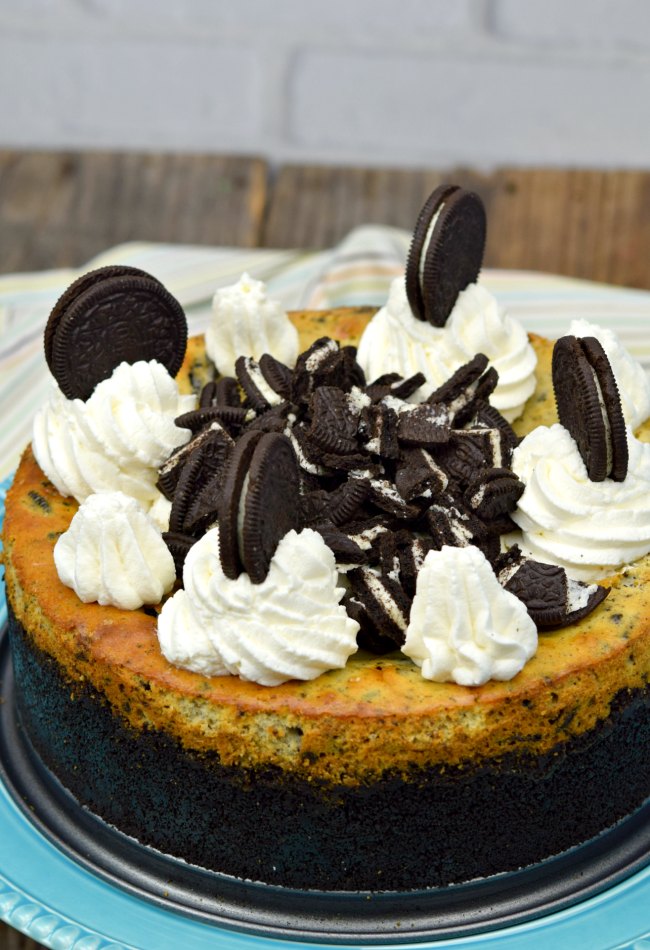 Plan Ahead: Many cake recipes recommend having your ingredients at room temperature, but it’s really a critical part of making a good cheesecake. The cream cheese needs to be soft so it creams easily if you want the perfect cheesecake texture. Having the eggs, whipping cream, etc. all at room temperature also helps predict an accurate cooking time.

Whipping Cream: This ingredient makes an appearance on top of the finished Oreo Cookie Cheesecake but also in the batter. Most cheesecakes use either whipping cream or sour cream (which adds a tangy quality) to help soften the texture into that creamy dreamy stuff we all love. It IS whipping cream, though, which can turn into a textural nightmare if over-beaten, so just be careful to have your cream cheese completely smooth before adding the whipping cream to avoid any weirdness after baking.

Cream Cheese: Use the block variety of cream cheese in this recipe, not the kind you find in tubs – those are good for smearing on bagels but have more moisture and can impact the final texture of the cheesecake. I also suggest using regular cream cheese, not the lower-fat version or Neufchatel (made with all milk vs. milk mixed with cream).

Water Bath: Incorporating flour and watching the cooking process carefully to avoid over-baking will help minimize any cracking. While the cake will taste just as good (and any cracking will be barely noticeable under the whipped cream and crushed Oreos, trust me J), a water bath will go one step further to prevent cracking. If you haven’t used one before, wrap the outside of your spring-form pan (with the crust inside) in a double layer of aluminum foil to prevent water from ruining that beautiful Oreo crust, then set it inside a large roasting pan. Pour the filling into the springform pan at this point, then transport the whole contraption to your oven. Once it’s safely on the oven rack, fill the roasting pan with hot water until it’s about halfway up the side of your cheesecake pan. After the cheesecake is cooked, carefully remove the cake pan to a rack for cooling. I usually leave the bath itself in the oven to cool off completely before trying to transport it to the sink.

Party-Friendly: If you want to make these more finger friendly, try a mini Oreo Cheesecake recipe version. These are super fun to serve at kids’ parties (or any other place that’s pro-Oreos and cheesecake, i.e., everywhere). Turning my version into an Oreo Cheesecake Cupcake recipe lets you avoid the serving hassle of slicing up a big cake. First, place cupcake wrappers in muffin tins (about 15-20 total, depending on the size of your pans). Then drop a whole Oreo cookie in the bottom of each for an instant cookie crust. Make half of the cheesecake batter in my recipe and fill each cup almost to the top. Bake these in a 350-degree oven for 20 – 22 minutes until just slightly jiggly then chill for about four hours. You can top these with whipped cream and crushed Oreos or add a dollop of your favorite chocolate ganache. 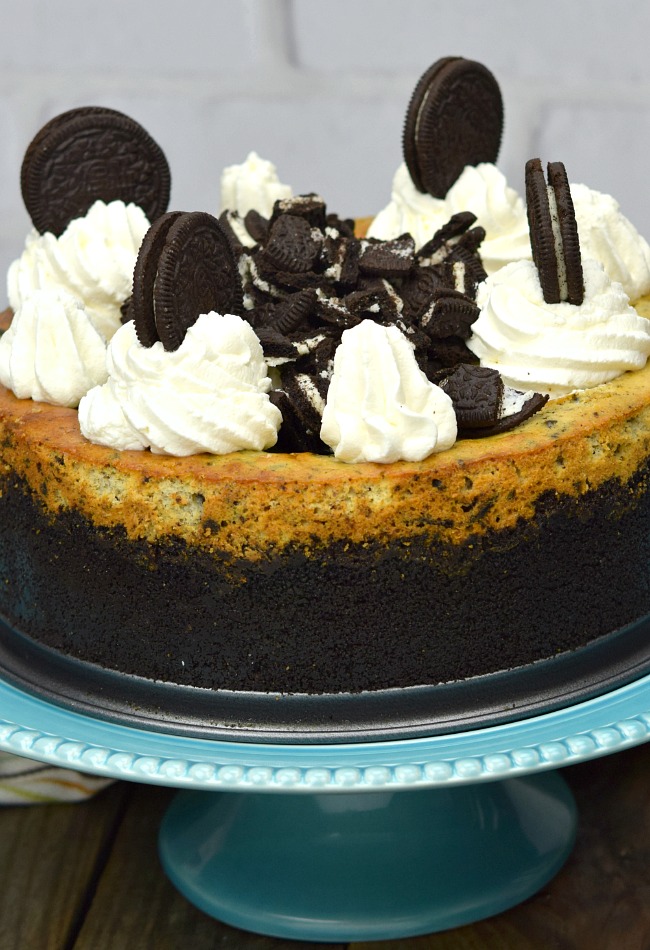 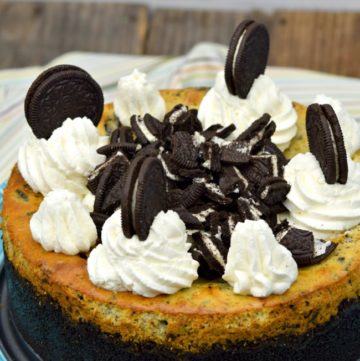