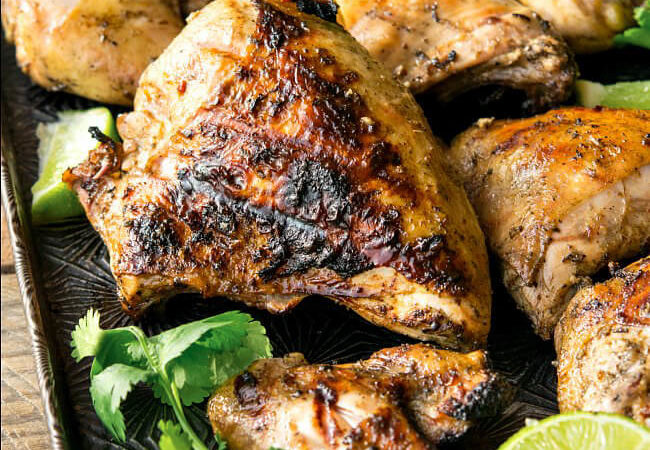 Put a Mexican spin on your grilled chicken with this Pollo Asado Recipe. Smoky, spicy, tangy and tasty, this dish has it all, and your backyard BBQs will be the most popular ones on the block! Pin it to your BBQ BOARD to save for later! Be Sure To Follow Gonna Want Seconds on Pinterest for

JUMP TO RECIPE
Pin314
Yum11
Reddit
Share2
Email
327 Shares
Put a Mexican spin on your grilled chicken with this Pollo Asado Recipe. Smoky, spicy, tangy and tasty, this dish has it all, and your backyard BBQs will be the most popular ones on the block! 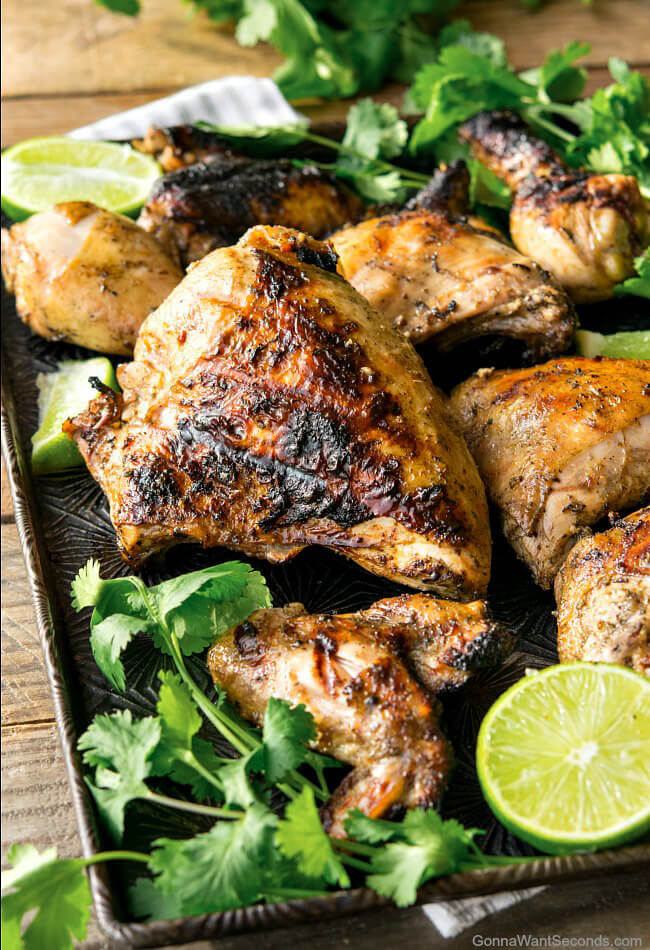 Pin it to your BBQ BOARD to save for later!

While you may not be able to translate all the items on a Mexican restaurant menu, I suspect you can navigate through enough of the Spanish to find your favorite things (assuming you make it past the queso and margaritas).

Chicken-lovers will look for pollo and dishes like Pollo con Arroz (with rice) and Tinga de Pollo (with chipotle sauce).

What does asado mean?

Yes, I suppose I should answer that question first: “what is pollo asada?”

Well, asada or asado means “roast” in Spanish, and it’s often used to refer to a big roasting or grilling event. Basically, this recipe is like BBQ’ed chicken with a little Mexican fiesta thrown in, and it’s the best thing you’ll be throwing on your grill this season!

The secret to this dish is a carefully crafted Pollo Asado marinade, a flavor-packed blend of authentic spices and ingredients that add a touch of heat, balanced with a bright acidity and all the earthy flavors you’d expect from a hearty Mexican meal.

Honestly, any other grilled chicken will just pale in comparison. I’m going to share my Pollo Asado recetas (or “recipe”) so you don’t have to take my word for it – you can see for yourself just how amazing this dish is! 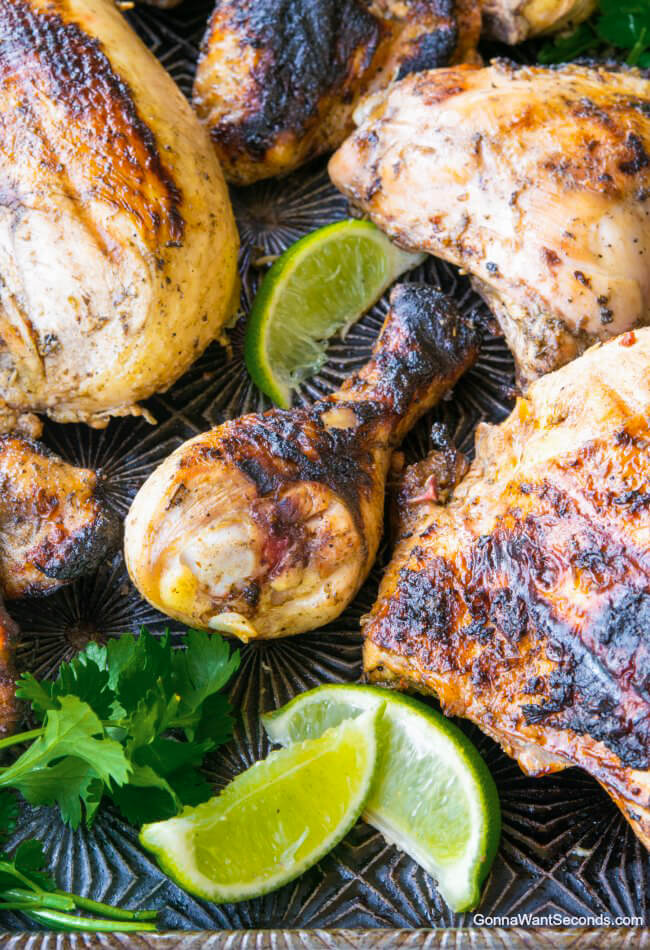 How do you make Pollo Asado?

Many recipes start with pre-sliced or boneless chicken, like the pollo asado Trader Joe’s sells, but I like to use a whole, bone-in chicken cut up into finger-lickin’-sized pieces.

Home cooks love to use the chicken as a killer taco filling, but I feel like this dish deserves main-dish status – something that doesn’t need to be carried in a tortilla. The flavors are off-the-charts, and using chicken with the bones intact adds moisture and richness you just can’t get without them.

So what’s in this magical marinade?

Well, most soaking liquids for any kind of protein start with an acid, and this recipe uses lime and orange juices. The citrus still breaks down some of the proteins in the chicken to help tenderize, but the resulting flavor is so much fresher than using something like a wine vinegar, and it lends a slightly tropical feel to the chicken.

The star of the marinade is achiote paste, a concentrated blend of really heavy-hitting spices that are the hallmark of this dish: ingredients like cumin, coriander, oregano, cloves, peppercorns, salt, maybe even some cinnamon and orange zest.

The spices are combined with either citrus juice or vinegar to create the paste, and it’s sold in little blocks for your cooking adventures.

Achiote paste also includes annatto seeds, which is a classic addition to Latin American dishes and has a peppery, slightly earthy flavor.

Annatto seeds are probably most well-known for imparting their red dye-like qualities to things like cheddar cheese and rice. Pro tip: Unless you have a solid red wardrobe, use some care when handling the paste for this recipe since it doesn’t always wash out.

You’ll see lots of garlic in the marinade since I really like the way the citrus juices bring out the subtle sweetness of everyone’s favorite, pungent aromatic.

Cumin is a common flavor you find in many Mexican dishes, and it adds a nice smokiness.

I also like to use a little oregano, a Mexican variety if you can find it. There’s a subtle difference between it and the Mediterranean variety that I prefer in Latin-inspired recipes, but either will work.

Although it’s not typical in marinade-making, you’ll want to heat up the spices and garlic first to release all their flavors before putting the ingredients together (this technique works for dry spices as well as aromatics).

The marinade – and the chicken – will thank you for the extra time. Make sure you cool it slightly before mingling with the chicken since you don’t want to start the cooking process prematurely.

I recommend using a plastic zip-top bag (standing in a drip-catching container) to marinate in. Unlike a big bowl, the bag more evenly distributes the marinade around all the chicken pieces.

It’s still good to massage it every few hours to make sure all the chicken is getting some marinade love.

You definitely want a few hours for marinating, even overnight, but I wouldn’t go too far past that. The citrus in the marinade does tenderize, but it will eventually start to toughen the meat and change the texture. 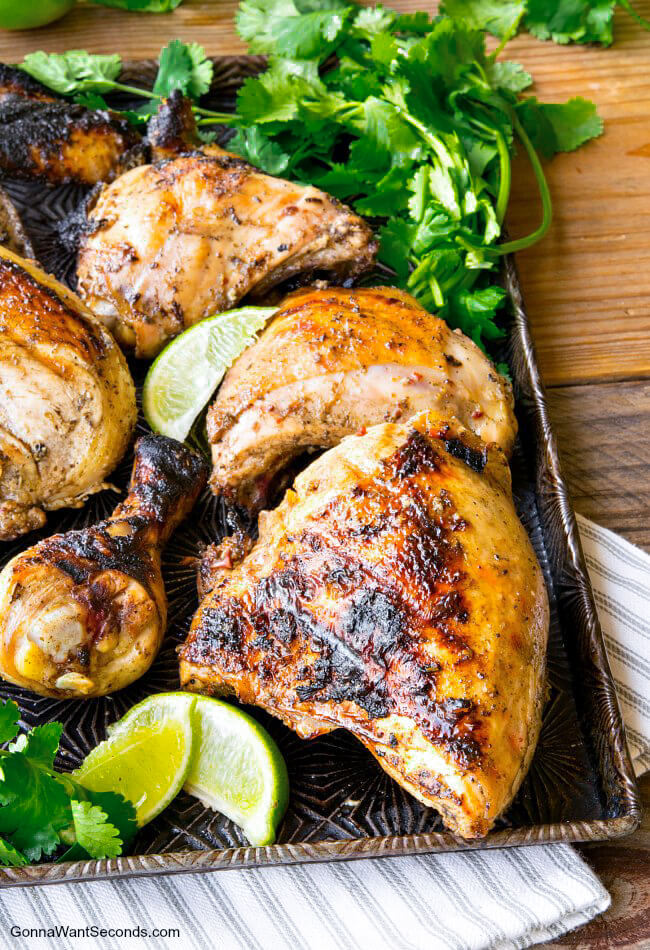 How long do you cook Pollo Asado?

Technically this is a Pollo Asado al carbon recipe, which means it’s cooked over charcoal. I love the flavor the grill adds to the chicken, and the crispy texture, so I definitely prefer it to something like a pollo asado slow cooker version, plus it cooks more quickly!

You’ll need somewhere 8 – 15 minutes, depending on the type of grill you have, to lightly brown the chicken on each side.

Then just a few additional minutes on the indirect-heat side of the grill will make sure it reaches a safe-to-eat temperature without burning.

The only Pollo Asado sides you really need are an icy cold beer and lime (and maybe someone to share it with), but you can always go with the standard Mexican rice and refried or charro beans. A cool salad like Cowboy Caviar complements this chicken really well, or you can always throw some Mexican corn or other veggies on the grill with the chicken as a great time saver.

Bring on the tortillas – While I love this chicken as-is, I’m still a fan of Pollo Asada tacos.

The good thing is there’s no real change to the pollo asado taco recipe.

Just pull the chicken off the bone and layer it into a warm corn or flour tortilla with all your favorite taco toppings (like the ones I use when I make Carne Picada): shredded lettuce, pico de gallo, fresh cilantro, queso fresco, or sliced avocado.

For a little “cool” heat, you can combine sour cream and canned chipotle peppers in a blender to serve as a creamy, zesty condiment. Tacos are also a great way to repurpose your leftovers.

Oven options – As I’ve already mentioned, I prefer to cook this on the grill.

If I’m honest, though, in the dead of winter, when I get a craving for this yummy chicken, I’m not lighting up my Weber.

Here’s how to cook Pollo Asado in the oven if you just can’t stand the cold: Put all the marinated chicken pieces into a roasting pan and bake in a 375 degree, preheated oven for about an hour, or until the juices run clear and an instant-read thermometer measures 165 degrees.

Measure the temp in the thickest part of the thigh, near, but not touching, the bone. 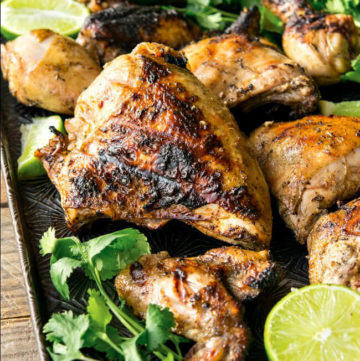