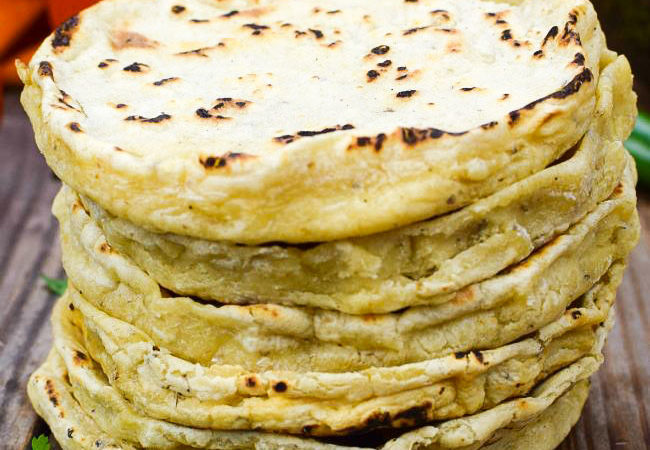 Make it better with masa this Cinco de Mayo, and try your hand at Mexican Sopes. They’re a traditional snack or street food in Mexico, loaded with tasty toppings that will leave you yearning for some mariachi music and a margarita! As someone who’s obsessed with food and loves to experiment with different flavor combinations,

Make it better with masa this Cinco de Mayo, and try your hand at Mexican Sopes. They’re a traditional snack or street food in Mexico, loaded with tasty toppings that will leave you yearning for some mariachi music and a margarita! 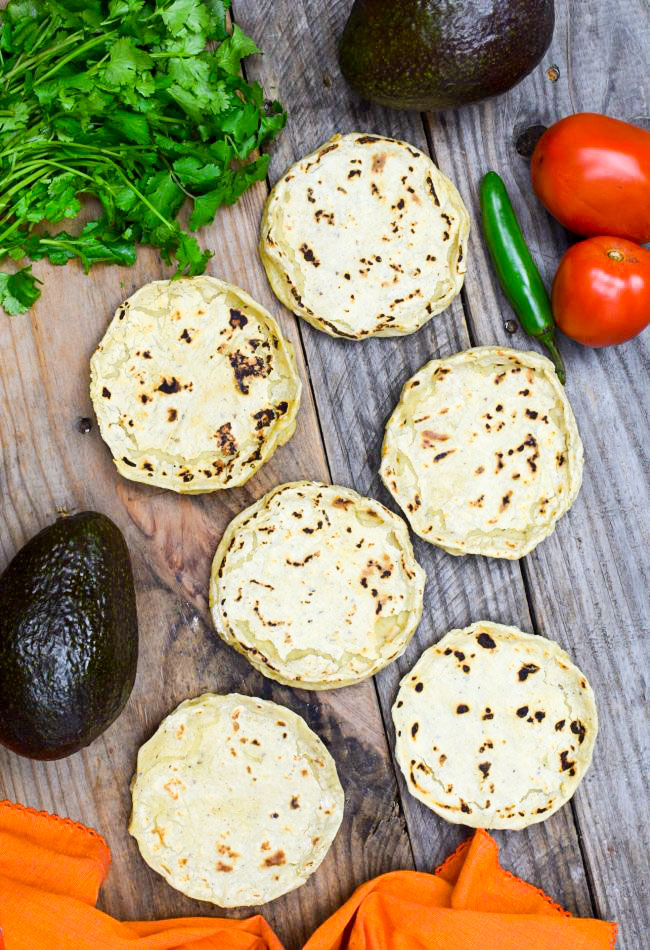 As someone who’s obsessed with food and loves to experiment with different flavor combinations, I’m a big fan of restaurants’ “build-your-own” concept:  your own pizza, your own stir fry, or your own ice cream sundae.It’s also something you can easily replicate at home (like one of my favorites, taco night :-)) and satisfy the different tastes of family and friends.

It’s also going to be your new go-to recipe for entertaining or a fun theme night during the week. Look out taco night!

Sopes (pronounced ‘so-pez’) are part of a special category of Latin American food called antojitos, the Mexican version of Spanish tapas. It means “little whim” or “little craving,” and, trust me, “craving” is the most appropriate word for these crispy, savory little treats.

Antojitos make up most of the amazing street food in Mexico and typically include corn masa. Corn as we know it – the crisp, golden kernels glistening with melted butter – is actually the product of a domesticated grass that natives in Central America cultivated over 7,000 years ago.

Back to our Sopes Mexican. . . they are essentially very thick corn tortillas, roughly the size of a fist and shaped like a small tart, with pinched sides to contain a variety of fillings. It’s soft on the inside and crispy on the outside, with an intense corn flavor that provides the perfect backdrop for whatever you choose to fill them with. I like to think of them as little Mexican pizzas where the sky’s the limit on toppings, plus they’re the perfect size for having more than one!

In Mexico, Sopes are so popular you can find them in the supermarkets ready to take home, heat, and eat. There aren’t any stores that carry sopes near me, unfortunately, but no worries! Although there is a little technique for producing these tasty little vessels, the recipe for Sopes (or “Sopes receta”) is really very simple.

The main ingredient in Sopes is masa harina, which is a flour made from dried corn (or maize, depending on which continent you’re on) soaked in lime water (naturally gluten-free, guys!). Mixing this with salt and hot water creates masa, the mother of all corny doughs for all things tasty and Mexican – corn tortillas, tamales, our Sopes, and gorditas (Sopes’ stuffed cousin). Once the dough is ready, the shaping begins, and the little masa bowls are cooked in a dry skillet just long enough to set the dough, then they’re pan-fried in oil to produce that crispy crust just before serving. 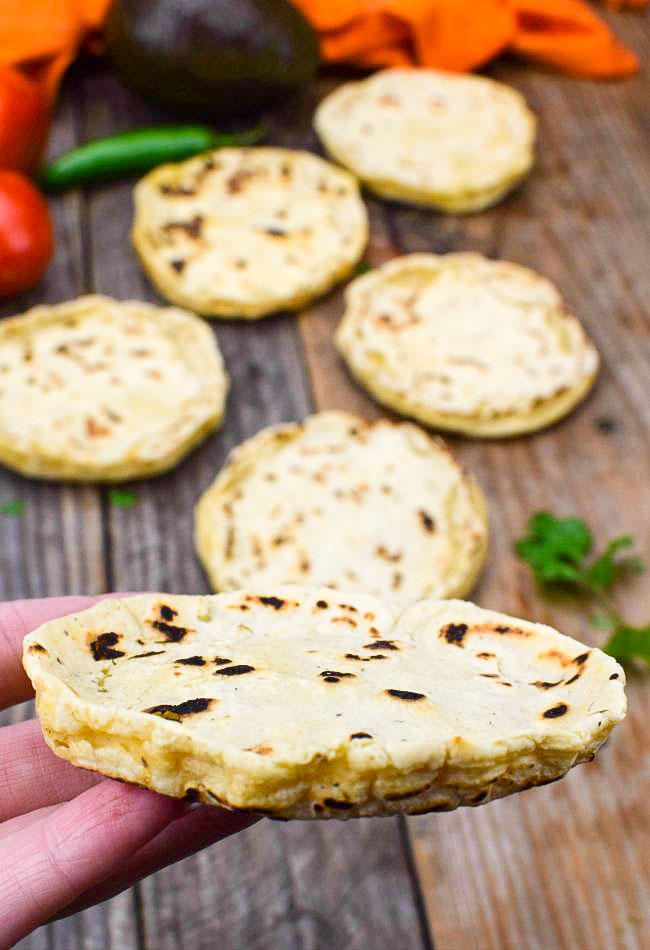 You may be wondering how to eat Sopes once you have your savory shells ready to go. Well, as I mentioned before, the possibilities are limited only by your imagination. If you want to go the traditional route, start with a layer of refried beans and some shredded chicken (Sopes de Pollo con Frijoles). Other additions include tomatillo or roasted tomato salsa, shredded Mexican cheese or crumbled cotija (similar to a mild feta cheese), maybe some Mexican crema, or sliced avocado. Steak, chorizo, fish, or shrimp . . . pick your protein, or maybe enjoy a vegetarian version with sautéed or grilled peppers, onions, and mushrooms. Just put out a build-your-own Sopes bar with all your favorite toppings and let inspiration be your guide.

Eat Sopes with a knife and fork or make them a fun new finger-food for entertaining. Just make friends with masa and make some Mexican magic in your kitchen!

Planning Ahead: Although making Sopes isn’t a difficult process, it does get a bit time-consuming. The good news is they’ll stay fresh in the freezer for a few months, so make extra. After the dry-skillet step, wrap the Sopes carefully and pop them in the freezer. When you’re ready to eat them, just defrost and fry them for a quick, fresh (and impressive!) dinner. Sopes are also the perfect meal for repurposing leftovers. Whether it’s pulled pork from a weekend BBQ, grilled chicken or vegetables, or even chili, those Tupperware containers in your refrigerator can be a great resource for a quick meal. 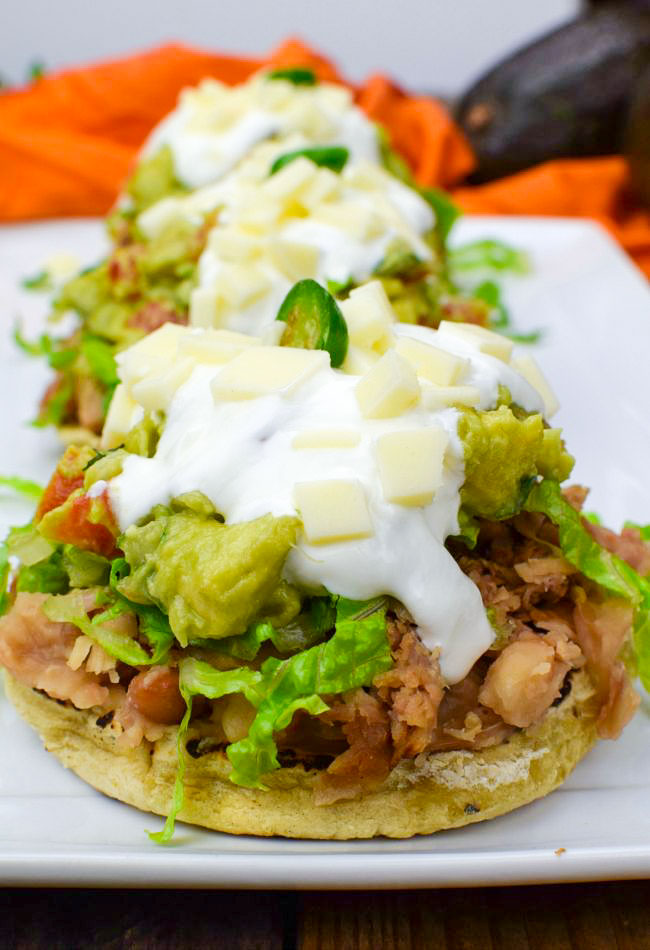 Shaping:  Some recipes suggest leaving the pieces of masa flat for the first cooking, pinching the edges while it’s warm, then frying. This can help the edges hold their shape better and allow you to flip them during the frying process for crispy perfection.

Toppings: As I mentioned earlier, most cooks start with a layer of warm refried beans.

Then, most often, there is a delicious layer of seasoned meat. When I make Sopes, I generally make them the day after I’ve served a big meal of Pork Carnitas, Arroz con Pollo, or Ropas Viejo. The leftovers from these meals make the perfect flavorful meaty toppings to go on Sopes.

After that, it’s really all a matter of what your favorite combinations are. Honestly, even some leftover rice and cheese makes a super tasty snack! I do recommend adding some shredded lettuce or cabbage for a crunchy, cool complement to the warm Sopes. Another traditional addition to Sopes, and Mexican food, in general, is sliced radishes. They add lovely color, of course, but also a nice peppery crunch. Loading up with extra veggies will also make the overall Sopes calories a bit friendlier to the waistline.

Water: If there’s any real trick to making Sopes, it’s in making sure you have the correct amount of moisture. Masa harina actually takes some time to fully absorb water, so be sure to knead it a few minutes before deciding to add more. The sopes just won’t hold up to cooking if they’re too wet. Just like any other bread dough, humidity can make you need more or less water on any given day.

Equipment: I generally use a tortilla press for the first step of forming the disks that will become Sopes. It definitely takes a little practice to dial in the correct thickness on Sopes with a press. If they’re too thin, they’ll fall apart under the weight of all those amazing toppings! If you don’t have a tortilla press, you can easily flatten the sope into the disks with a pie plate. Honestly, when I was first taught to make Sopes, we used a rolling pin.

Because Sopes can be a little tricky to move around or flip, you may prefer to use a straight-sided saute pan rather than a round one. Slightly higher sides will also keep the splatter to a minimum, which I always appreciate when dealing with hot oil! 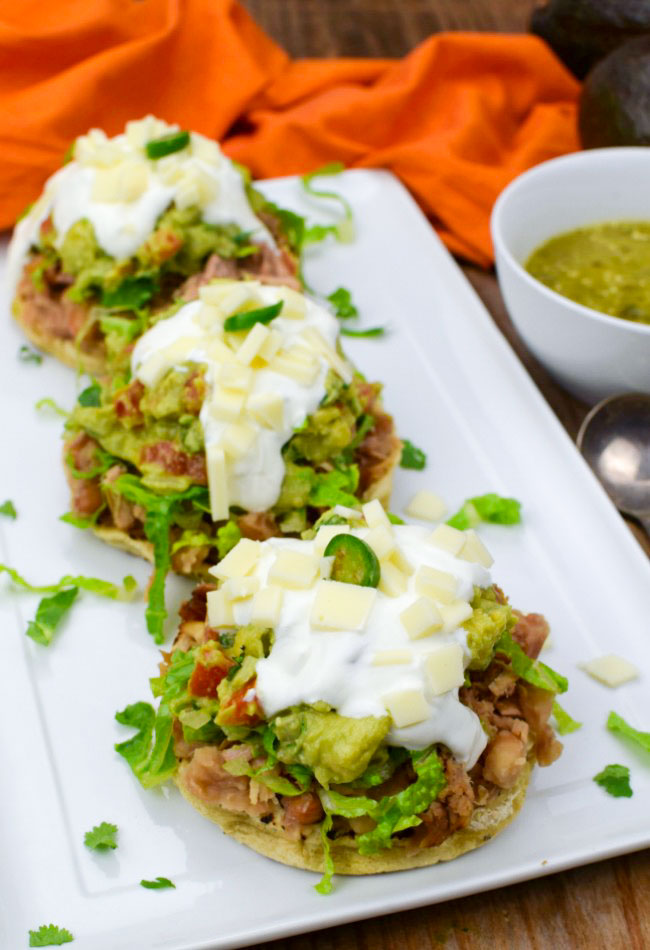 Make it better with masa this Cinco de Mayo, and try your hand at Sopes. They’re a traditional snack or street food in Mexico, loaded with tasty toppings that will leave you yearning for some mariachi music and a margarita!
Prep Time20 mins
Cook Time40 mins
Total Time1 hr
Servings: 4 -6
Author: Kathleen

Favorite Dishes To Serve With: