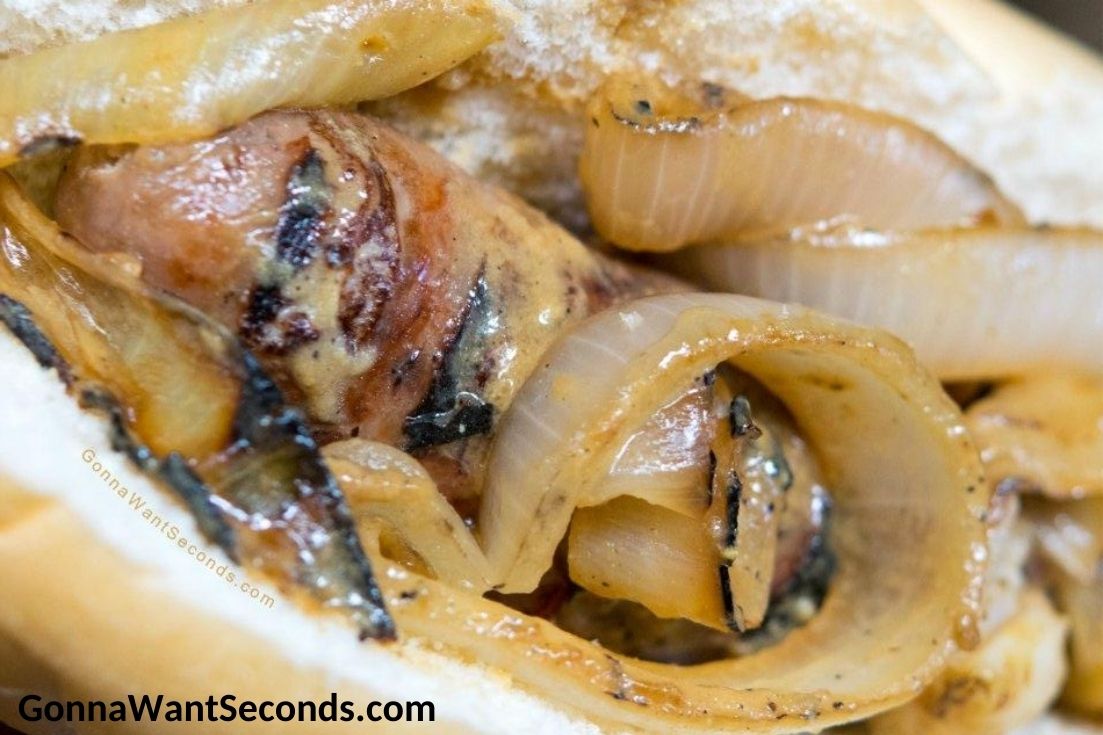 Your taste buds have finally met their match in these tasty versatile beer brats infused with vibrant flavor that pops in every single bite.

Beer brats are more than your average sausage recipes, they’re one of those culinary couplings that make our tasty world go ‘round! You can always pull out the potatoes and bacon and whip up some Olive Garden copycat Zuppa Toscana. But let me tell you, these babies are infused with plenty of caramelized onions and mustard for a crispy savory flavor that’s just outta’ this world!

If you’re lucky enough to have any leftovers, chop them up and put them in a robust Mostaccioli or serve up some Bisquick sausage balls. They’ll be even better than normal but first, you’ve got to try this recipe AS IS.

Grab a cold drink, stoke up the grill and let’s get cooking…… 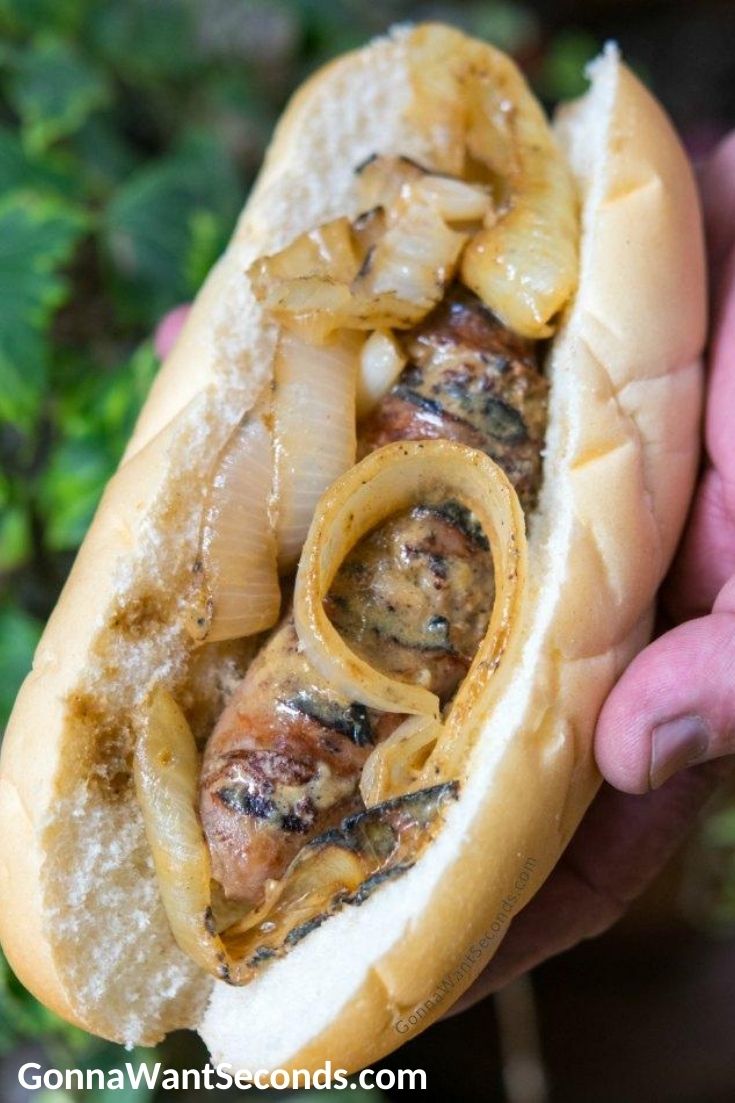 How To Make Beer Brats Recipe

Serving up these brats is super simple, and they’re totally infused with intense layers of flavor. Just toss your beer marinade on the grill and add your charred onions.

Brown your brats before submerging them in the beerinade for 15 minutes. Then toss the brats back on the grill to seal in that juicy pop in every bite. 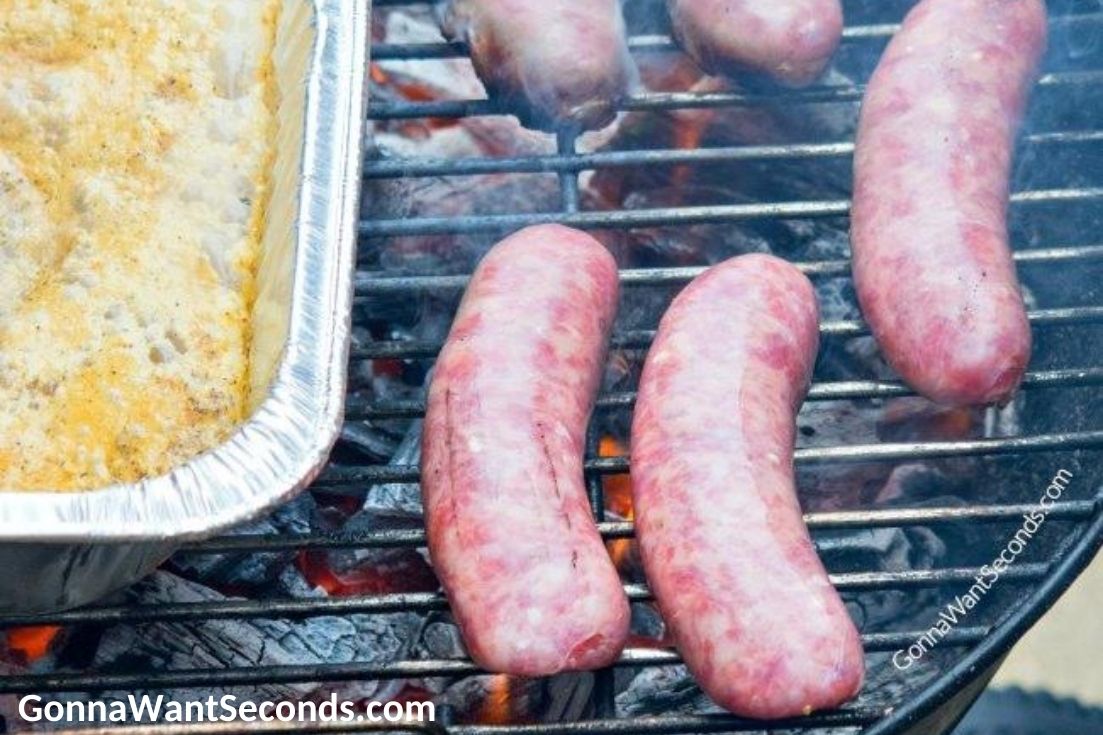 Crafting beer and brats with this kind of profound flavor profile is typically done using a brown-boil-char technique. The brats’ skin loosens up a little after their booze cruise so throwing them back on the grill is really the finishing touch. It gives them that little bit of extra char and concentrates the flavor as the beer and onion flavor reduces. Just don’t boil the beerinade or you’ll end up with tough brats.

Oven Version- Now I prefer the grill version, but you can also make them in the oven if necessary. First, broil the brats with the onions, then cover and bake on 400 degrees for 15 minutes. Then bake uncovered for 15 minutes and you’re done!

Stovetop Version– Sometimes there are good reasons to eschew the grill!

Slow Cooker- Can you make beer brats slow cooker style? Sure! Brown your brats and onions first (under the broiler or in a skillet), then pop everything into the slow cooker for 7-8 hours on low or 4 hours on high. I do recommend crisping the brats before serving to most closely mimic the grilled version.

Charring beer brats on grill grates impart a special flavor that is simply unmatched with any other technique. If you want to convert this recipe to Italian Sausage and Peppers, just add bell peppers and throw the onions back on the grill!

The most important thing is to use a beer you like for this recipe and try to avoid really ‘hoppy’ beers because cooking enhances their bitterness. For a sweeter richer flavor try a darker beer like a porter or stout. For a malty flavor without the added sweetness, try a lager instead.

The general consensus seems to be that mild lagers are best but use what you like!

Meaty matters – You may be tempted to pierce the brats to maximize absorption of beer/onion flavor, but you’ll actually lose brat flavor, so I don’t recommend it.

Mustard – balances the natural sugars in the beer and onions, but adds a touch of heat that works with the richness of the brats. Any classic variety – yellow, Dijon, or spicy – will do, but coarse mustards don’t incorporate as well.

Caraway seeds – The other braise friend is caraway seeds. The seeds have a warm, licorice flavor that tops off the other aromatic qualities of this dish in a really wonderful way.

One of the best parts of this incredible beer brats recipe (besides the flavor) is its simplicity. The main tool you need is a grill with a lid and a 13 x 9-inch pan for the beerinade.

Your brats will stay crave-worthy and ready to eat for up to 3 days in the fridge. Keep them wrapped tightly in foil or in an airtight container to help seal in that awesome flavor. You’ll be lucky if you have one of these babies left. These aren’t your run of the mill sausage dogs.

Absolutely! This freeze really well but they’re always best fresh off the grill. I like to let them cool after they come out of the beerinade and then prepare them for the freezer. When you’re ready to serve them for dinner, thaw them out and toss ‘em on the grill with a few new onions. Voila!

Here’s the thing. As these babies cool and get reheated, the skin tends to loosen a bit and they can lose that juicy pop when you bite into them, but the flavor stays Ah-May-zing!

When I’m trying to prep ahead, I like to let the brats cool after their booze cruise and toss them in the fridge. The next day when I’m ready to serve them, I just stoke up the grill and toss them on for 15-20 minutes.

These babies are so scrumptious you can serve them with just about anything. I like to serve my beer brats with Hissy fit dip (my sister’s favorite) or beer cheese dip, classic macaroni salad, and sometimes even Sunday gravy.

These full-flavored sweet-n-savory beer brats are so totally de-lish, you can use them in lotsa’ different recipes. Of course, They’re perpetually pleasing on a bun, but they can also jazz up other recipes that call for sausage. Here are some tasty options to ponder. 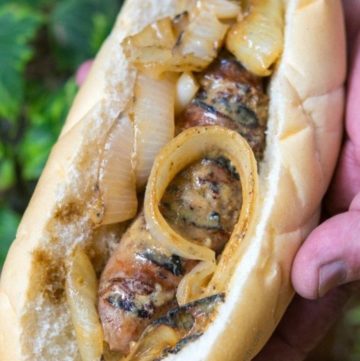 Here’s even more savory sausage dishes you may enjoy. Check them out!

These scrumptious beer brats are picnic-ready and backyard barbecue approved. They’re infused with massive layers of flavor and a yummy pop of deliciousness in every single bite.

Toss them on a bun with some caramelized onions and mustard or jazz up another recipe that calls for sausage. You just can’t go wrong with these babies! This is one of my all-time favorite summer recipes and I’m willing to bet that you’re gonna’ feel the same way!