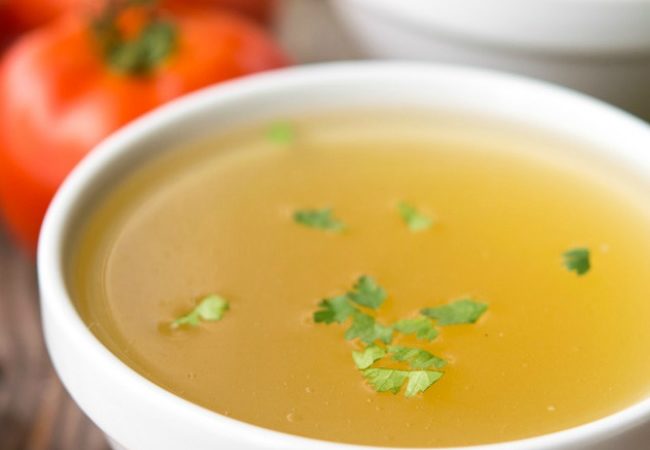 Add some Latin flair to the classic chicken stock and create Caldo de Pollo, a wonderful, game-changing flavor base for all your Mexican-inspired cooking! Pin it to your FAVORITES BOARD to save for later! Be Sure To Follow Gonna Want Seconds on Pinterest for more great recipes! There’s a reason they say chicken soup is

Add some Latin flair to the classic chicken stock and create Caldo de Pollo, a wonderful, game-changing flavor base for all your Mexican-inspired cooking! 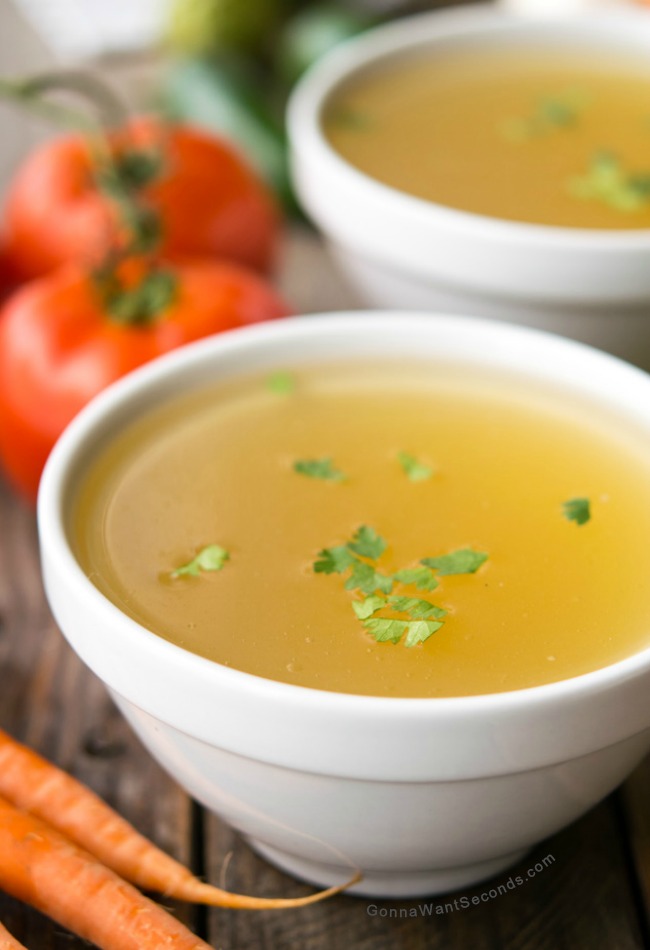 Pin it to your FAVORITES BOARD to save for later!

There’s a reason they say chicken soup is good for the soul, or a cold, or a gaggle of whining, hungry kiddos.

The humble chicken, slowly simmered with just a few ingredients, can transform water into liquid gold so satisfying it’s like a salve for your insides.

If there’s a pot of Caldo de Pollo near me, I’m probably smiling inside and out!

What is the meaning of caldo?

Caldo means “soup” or “broth” in Spanish, so the Caldo de Pollo translation is literally “broth of chicken.”

I like to say Caldo de Pollo in English means chicken stock with a Mexican twist!

Wondering how to make Caldo de Pollo (or como hacer caldo de pollo if you want to practice your Spanish)? Well, here’s my Caldo de Pollo receta (or “recipe”).

Just a few changes in technique to classic chicken stock prep, plus a few special additions to your chicken pot, and you’ll have a little nectar of the gods on your hands in just a few hours. 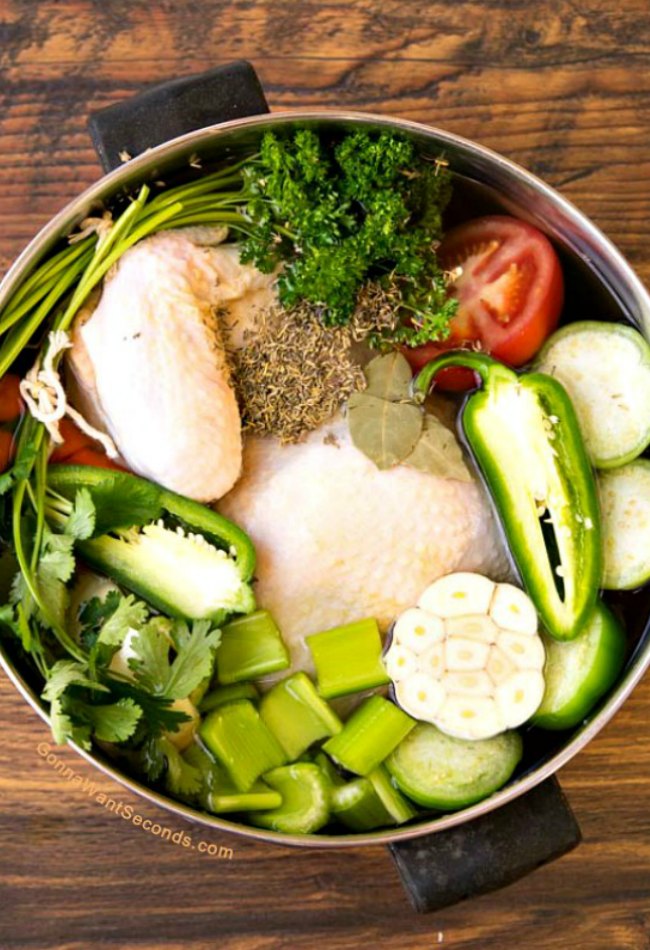 How do you make caldo de pollo?

The Caldo de Pollo ingredients start with chicken, of course, and I always use a whole chicken for this recipe.

Chicken breasts make a clean, strong-flavored stock but without much body; dark meat adds body, but the flavors aren’t as concentrated and the stock itself can be a little muddy.

Combining the two gets you the best of both worlds.

If you don’t have a pot that’s tall enough to hold a whole chicken, you can use one that’s been cut up. I recommend doing this at home, though, rather than buying a pre-cut one, so you can reserve the backbone and other bony bits the butcher might have pitched.

Using bone-in pieces is essential since they add lots of extra flavors and release collagen that enriches this, or any other, stock.

Bones will make traditional stock set up like jello once it’s been chilled a bit, and it’s definitely what separates a great homemade version from the stuff you buy in cans.

That being said, Caldo de Pollo is a little less rich than traditional stock.

For a regular chicken stock, I often use roasted chicken, then nestle the pieces into a slow-sweated blend of aromatics, and cook it for days (or at least half of one).

For this recipe, we’ll change the technique a bit to ensure a better balance of all the flavors.

First, we’ll only cook this a couple of hours, just until the chicken’s done and there’s no trace of pink near the joints in the backbone.

You’ll still extract some of the gelatin and flavor from the bones, but your chicken won’t be completely falling apart.

We’ll also NOT be sautéing the aromatics.

I almost always cook onions and celery first in all my recipes, mainly because the direct contact with oil and heat helps break down the ingredients to release maximum flavor. In this case, I deliberately opt for a more subtle veggie essence, which has the added bonus of less chopping!

The Caldo de Pollo seasoning includes some old standbys, but there are some unique Mexican items as well. Onions, carrots, celery, parsley?

But we’ll also use a whole head of garlic, plus two ingredients you almost never see in non-vegetable stock recipes: tomatoes and tomatillos.

Tomatillos are often used in Mexican cooking, generally in stews and salsas (like the salsa verde you may have enjoyed on your chicken enchiladas). They resemble green tomatoes in shape and color but have papery husks on the outside that make the skins underneath slightly sticky.

Green tomatoes are generally cooked to mitigate some of the intense tart flavors, but tomatillos have a more subtle, fruity quality that, even raw, is used to complement rich Mexican dishes like carnitas or roasted pork.

Along with the (ripe) tomatoes, they add a lovely acidic, almost fresh, element to this stock.

Instead of mint, I use marjoram (a member of the mint family) in my version since I prefer the earthy notes of it to the brightness of the mint.

I’m sure some of the cilantro haters are already planning to omit that ingredient, but don’t skip it even if you’re not a big fan of it raw on top of your tacos.

It mellows out a bit during the cooking and really helps impart an authentic Mexican flavor. (Also, don’t be scared of the solo jalapeno; after cooking, you’ll only notice a touch of heat.)

Once the liquid gold has cooled, you’ll remove all the big bits and use a fine mesh strainer to catch any remaining solids. 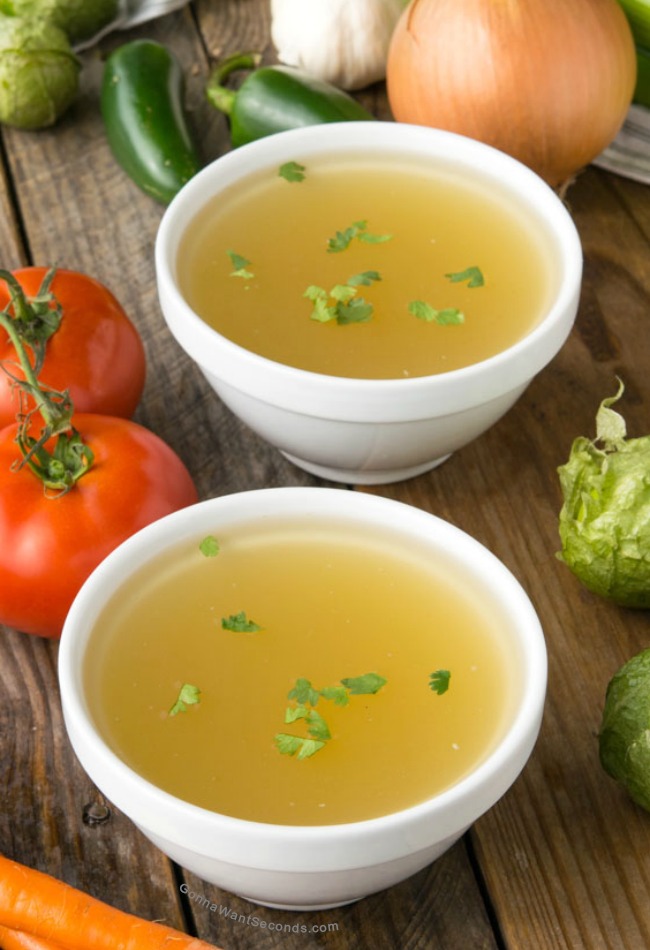 How long can you keep homemade soup in the fridge?

Soups actually have shorter shelf lives than dry things (like a cooked chicken) since bacteria thrive the most when there’s moisture.

Since we’re kinda dealing with a double whammy here with chicken essence and soup, I usually recommend freezing the Caldo de Pollo.

It’ll last months on ice while you devise all kinds of delicious ways to use it, but if your plans are already settled (and you won’t forget it’s waiting on you like I do sometimes) the soup will keep in the refrigerator for 3 – 4 days.

Need some ideas for incorporating this into your cooking?

You can make an authentic Mexican soup by finishing off this Caldo de Pollo recipe with cabbage chunks, corn (on the cob), sliced zucchini, and shredded chicken, then topping each bowl with fresh avocado and cilantro (a little Mexican rice on the side is good too).

Caldo de Pollo is also the perfect base for other soups like My Favorite Tortilla Soup, a great substitute for water in savory Mexican rice or beans, or a flavorful infusion for hearty, cheesy dishes like One Pan Burrito Bowls (if you don’t mind increasing the Caldo de Pollo calories, LOL!).

Caldo de Pollo is one of those CORE recipes you need to tuck into your recipe box so you can level up any Mexican-inspired dish.

General Stock-Making Tips – Boiling is bad – simmering allows the fat and impurities to separate out rather than being incorporated into your beautiful stock.

To help control the heat, you can even make a Caldo de Pollo slow cooker version. Just put everything into your crockpot and cook on low for 4 – 6 hours.

You also don’t want to stir the stock or keep pushing the veggies down into the pot.

Otherwise, you run the risk of that dreaded emulsification, and we want all the bad stuff to either float to the top or sink to the bottom.

During the first 30 minutes or so of the cooking process, some of the proteins and fat will create a white-to-gray foam that rises to the surface.

You’ll want to skim most of this off, again being careful not to disturb the stock too much.

The foam can turn a nice clear stock into a cloudy one, and it can actually turn bitter the longer it sits.

I suggest rinsing the chicken thoroughly to help reduce the amount of foam, but definitely, try these tips for effective skimming. 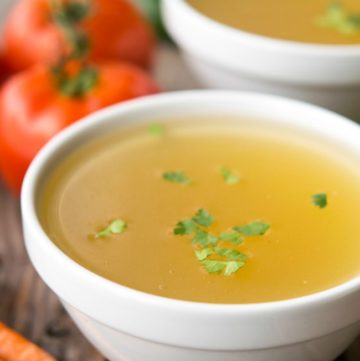 Beef Enchiladas -Tender, slow-cooked shredded beef and a sassy cheese combination wrapped up in a warm tortilla topped with the generous helping of sour cream.

Arroz Con Pollo – is a rice and chicken taste bud fiesta! A hearty mix of colors and flavors with a generous quantity of vegetables, so indulge away!