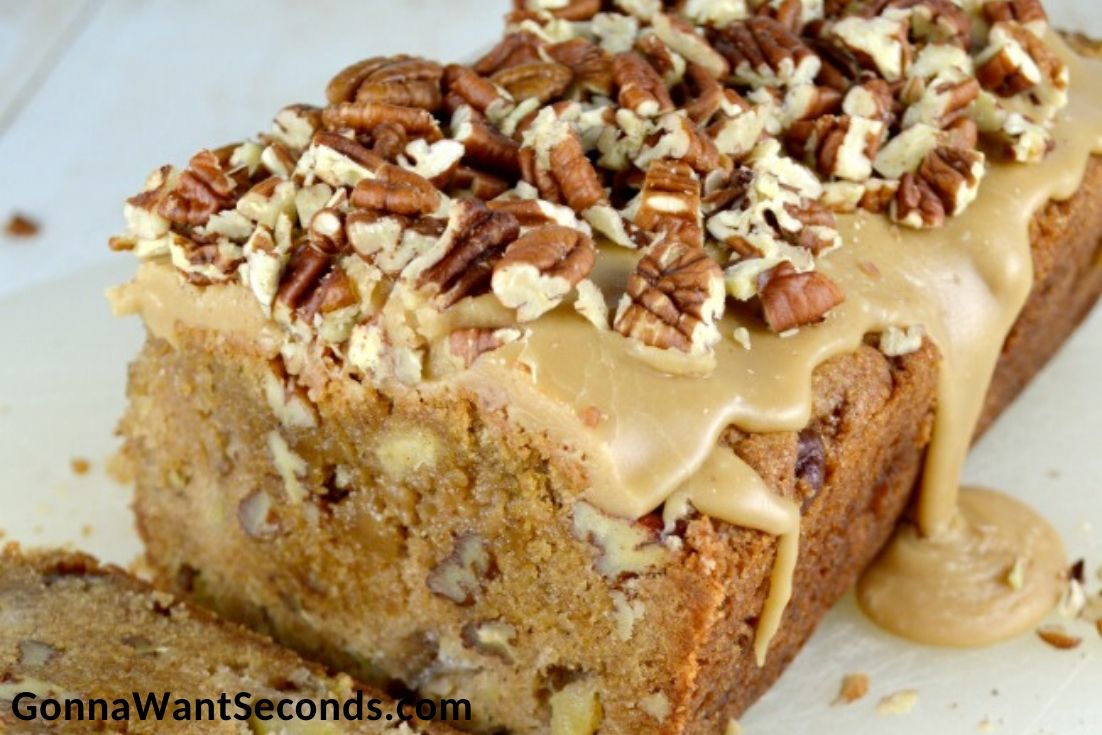 This easy Apple Bread Recipe boasts real diced apples and pecans with a sticky praline glaze. Perfection for a quick weekday breakfast or any day dessert!

Like so many misunderstood apple laden baked goods, (I’m talking to you Caramel Apple Sheet Cake), this bread is perfect all year long. This is why, when attending any local Farmers Market, you can get your hands on some tasty Amish apple bread.

Apples work all year, my friends. Never underestimate the baking power of a winter apple.

Similar in a few ways to dutch apple bread (hellooo glaze), this recipe is made completely from scratch…and is topped with an ultra sweet, brown sugar-y praline glaze. Believe me when I tell you, it is incredible. Your family will gobble it up within hours, and it never survives a brunch. It goes faster than an Apple Dump Cake at a mid-summer barbeque. 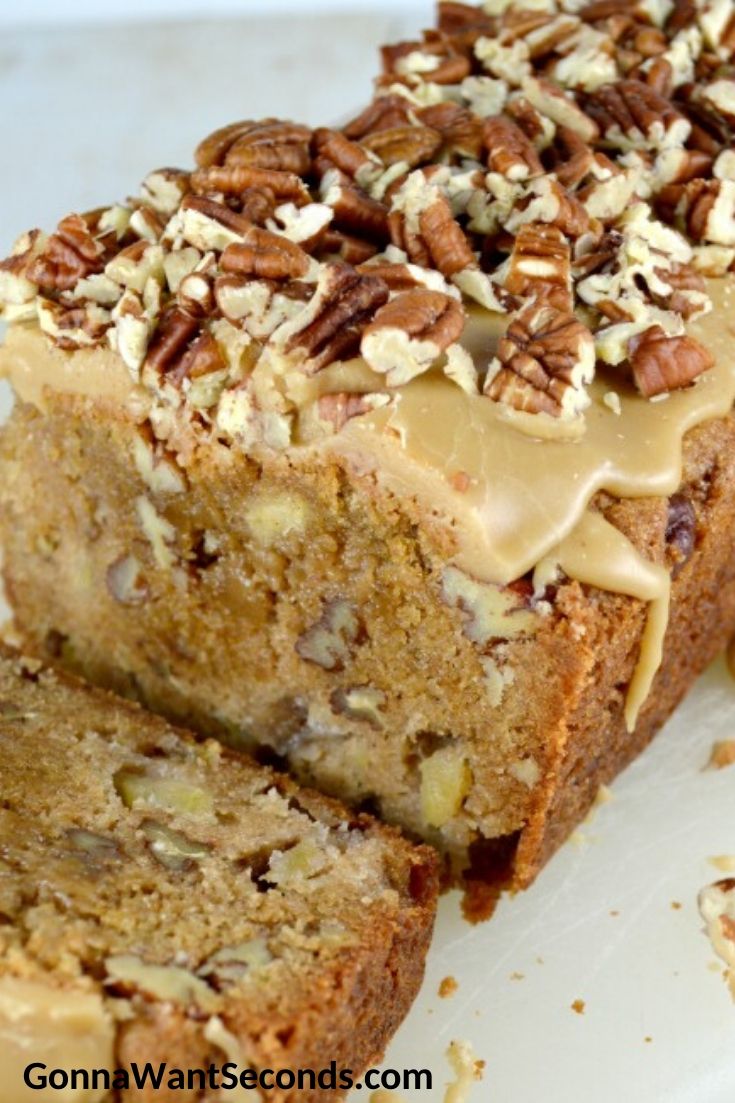 How To Make Apple Bread Recipe

This delicious apple bread is not specifically a cinnamon apple bread recipe, but it has a beautiful subtle, cinnamon, apple pie esque flavor. It’s great for any level of baker, from beginner to advanced, even though you’re making it from scratch.

To whip up this crowd pleaser, whisk together all purpose flour, baking powder, baking soda, salt, cinnamon, nutmeg, cloves, sugar and brown sugar. In a separate bowl, combine eggs, vegetable oil and vanilla. Add the wet to the dry and combine to create a thick batter. Add in apples and pecans. Bake at 350 in two 8 x 4 pans until toothpick comes out clean. Pour the glaze immediately over the top of the bread.

This goo-licious glaze is made in a saucepan with brown sugar, butter and milk – adding in powdered sugar and vanilla to thicken it up. The use of baking powder keeps this apple bread yeast free, making it as uncomplicated as it is tasty.

Note* You can easily make this recipe free of animal products! Replace eggs with a vegan egg substitute in the batter, and for the glaze sub in coconut oil for butter and unsweetened vanilla almond milk instead of cow’s milk. Bam! Apple bread vegan friendly. 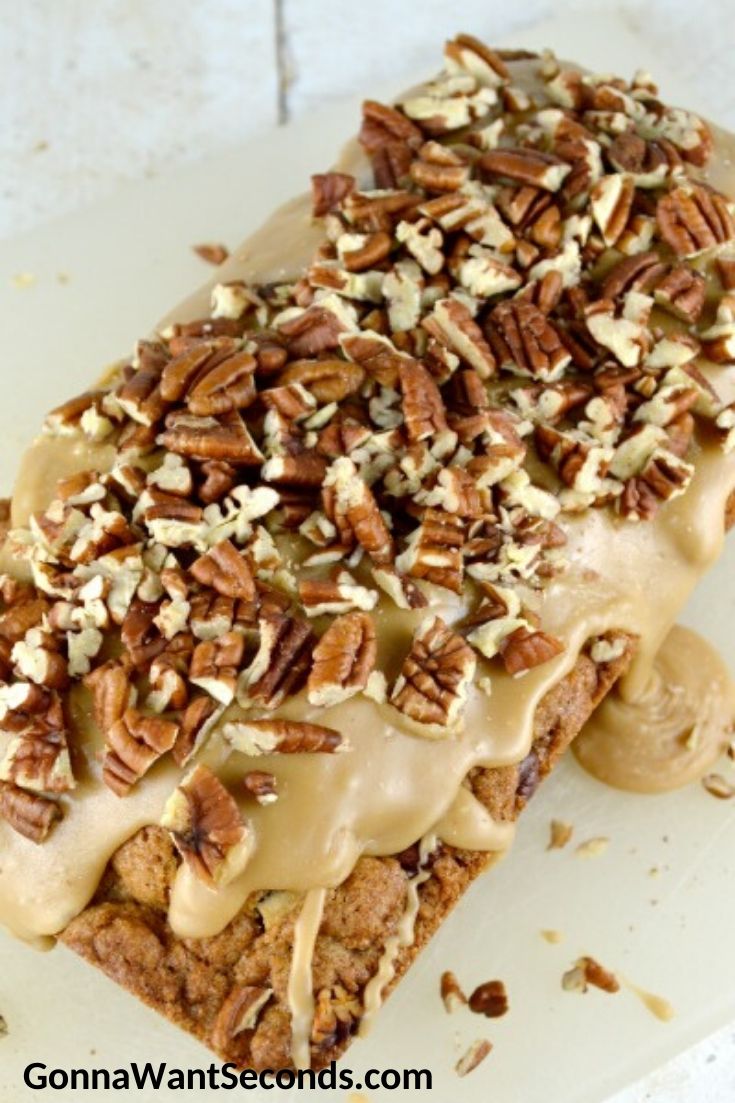 This is great for bake sales, because a single batch of batter makes two loaves. You’re already ahead of the game. For events like a brunch or bake sales, you’ll definitely want to whip this up ahead of time! You can bake up a bunch of loaves a week or so in advance and freeze them the same day.  They’ll be just as tasty when they thaw, and you won’t be stressed out. I know. We think of everything.

Loaves of this bread freeze wonderfully, so don’t be afraid to make them and bake them in advance! You can bake these beauties a day or week or month ahead of time. Perfect if you’ve got a church fundraiser on the horizon, or if you just prefer an unlimited supply of apple bread. Whatever works for you works for us!

Once the bread is baked, let it cool slightly and then toss it in the freezer. It will keep wonderfully for up to three months. 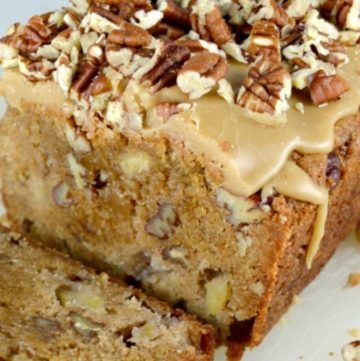