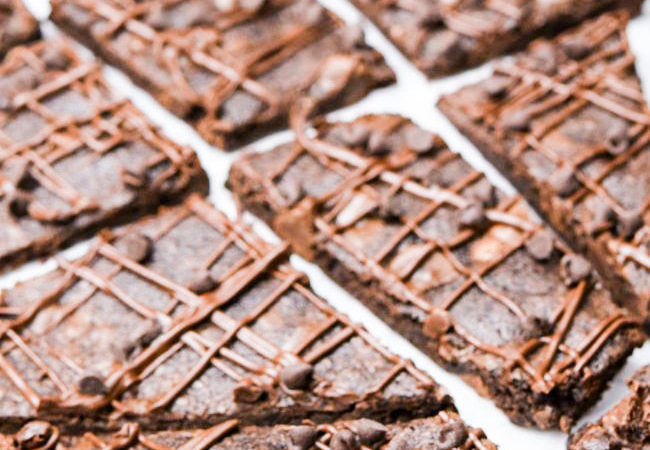 If you like the thin, crispy, top crust from a pan of classic brownies or the crispy corners, then this Easy Brittle Brownie is just the recipe for you! Pin it to your DESSERT BOARD to save for later! Be Sure To Follow Gonna Want Seconds on Pinterest for more great recipes! There are few

If you like the thin, crispy, top crust from a pan of classic brownies or the crispy corners, then this Easy Brittle Brownie is just the recipe for you!

There are few things in life as satisfying as a pan of freshly baked brownies. Everyone has their own personal idea of the perfect brownie, but whether you like them dense and gooey or thick and cakey, it’s hard to turn down a good brownie.

And unlike a lot of other desserts, there are actually some really great boxed mixes out there for brownies. Of course, sometimes you’re in the mood to spend an hour or two in the kitchen baking up something from scratch. But then there are times when you’ve just gotta have chocolate, like, right now. And boxed brownie mixes are perfect for those days.

All you have to do is add an egg or two, maybe some oil or water, pour it in a pan, and pop it in the oven. The hardest part of making brownies from a mix is waiting for them to cool so you can eat them!

Brownies are kind of like pizza—even if it’s not the best, hand-tossed, artisan pizza you’ve ever had, it’s almost always good.

And then, as if brownies themselves weren’t already tempting enough, someone went and dreamed up the delicious concoction that is brownie bark. If you’ve never had it, brownie bark is basically all the chocolatey goodness of brownies spread super thin and baked until it’s crispy.

I kind of think of it like brownie chips.

You know how the edges, and especially the corner pieces, in a pan of brownies, get a little crunchy around the outside? Those are everyone’s favorite pieces, and they even make brownie pans with individual squares so that each one has its own crispy edges.

I don’t know about you, but in my house, we practically fight over the corner pieces, and that’s exactly what brownie bark tastes like.

The first time I ever tried it, I found a brownie bark coupon  in my local paper’s weekly ad and I thought, “Why not?” Little did I know, it would quickly become one of my favorite sweet tooth curing snacks.

If you just want to buy your brownie bark, Costco is one of the best places to find it. But where’s the fun in that when you can make your own at home?

And you know homemade always tastes soooo much better!

There are a lot of different varieties of brownie bark, like mint, peanut butter, and salted caramel, but I like the simplest one the best.

If you’re a chocolate lover, it’s probably pretty close to your idea of heaven—the batter is deeply chocolatey, packed with chocolate chips, and topped with a chocolate drizzle (and even more chocolate chips) after it’s baked. It’s basically death by chocolate in brownie bark form.

If you’re making brownie bark, nutrition probably isn’t your number one concern, but it is a relatively low-calorie snack as far as dessert goes. That is, if you only eat the serving size and not the whole pan, which, trust me, is no easy feat!

You could also make this recipe sugar free by using your favorite sugar free brownie mix and chocolate chips.

My brownie bark ingredients list is very short and consists of baking staples that you probably have in your kitchen all the time. It only takes a few minutes to throw together and definitely does not require you to be an expert baker, so it would be an awesome baking project to do with kids.

Once you try my recipe and see how easy (and scrumptious) it is, you’ll never want to buy brownie bark again! 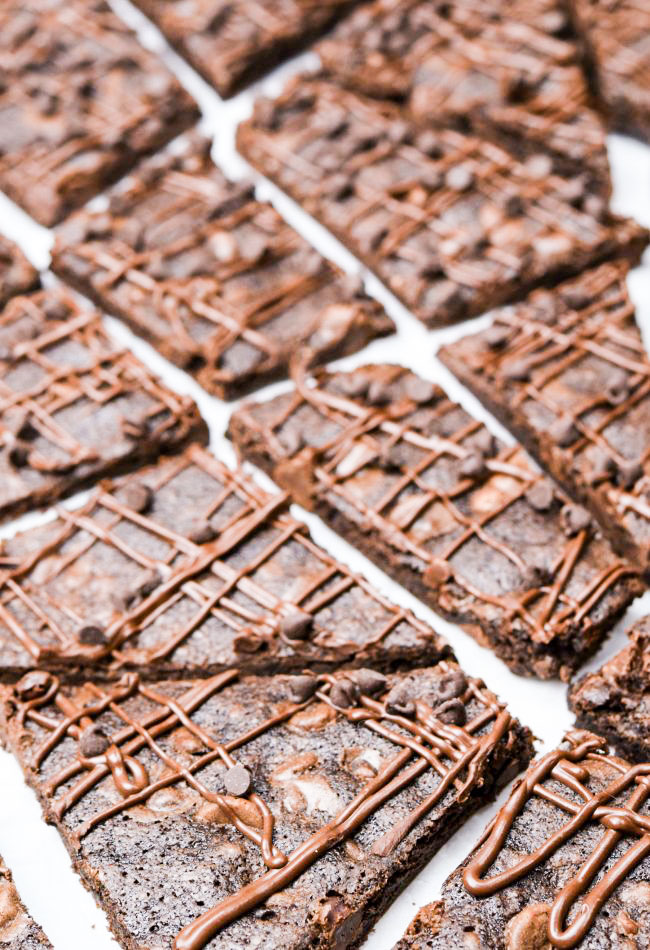 Brownie Mix: My personal favorite is Ghirardelli Dark Chocolate brownie mix, which is what I used in this brownie bark recipe. The mix already contains chocolate chips, but I am a chocolate fiend and I added an additional 1/2 cup to it. If you use a mix that doesn’t have any chocolate chips in it, you might want to double the number of chocolate chips listed in the recipe to a full cup.

Assembly: This batter turns out pretty thick, and spreading it in a thin, even layer can be a challenge. Since it has chocolate chips in it, it’s on the chunky side and it takes a little more finesse to get the batter spread around the chips.

I like to use a small offset spatula (actually one of my all-time favorite kitchen tools) because it lets you move the batter around in smaller amounts and get it between all the chocolate chips. If you’re picky about the little details like I am, you can also use the tip of the spatula to move the chips around so they’re evenly dispersed.

Baking: The instructions in the recipe say to leave your brownie bark in the oven when it’s done, turn the oven off, and allow it to cool. This may seem like a strange step, but it really helps any remaining moisture to evaporate so the finished product turns out as crispy as possible. I promise it’s worth the wait!

Topping: A quart-size resealable plastic bag with a corner snipped off is a great makeshift piping bag for decorating desserts. For a thin drizzle of chocolate on your brownie bark, start by cutting the tiniest piece off the corner you can manage. You can always cut off more if you need to, but trust me—it doesn’t take much, and it’s way too easy to cut off too much and have to start over with a new bag.

I also like to sprinkle mini chocolate chips over the warm chocolate drizzle. It makes the brownie bark look really pretty and adds even more texture. If you don’t have any mini chocolate chips, you could use the regular sized ones, but the mini ones work better, so use them if you can find them!

If you want to add even more toppings to your brownie bark, salted caramel would be a delicious and decadent choice. You could also try using white chocolate instead of (or in addition to) semisweet for the drizzle. 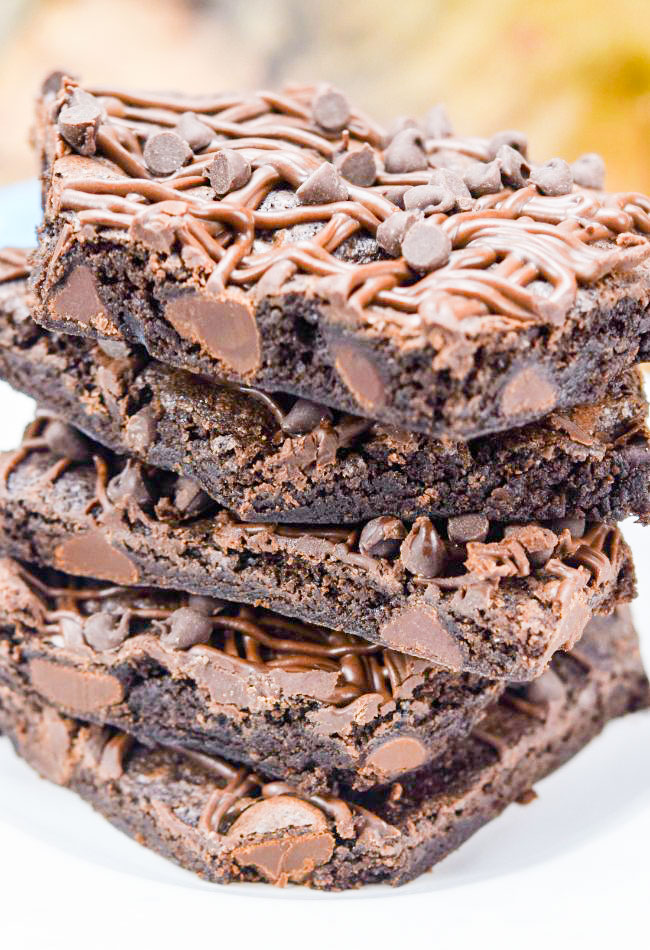 Brownie Cookies – Rich chocolaty decadence of brownies but with a surface crackle!

or, for something a little different, check out this Low Carb White Almond Chocolate Bark, from Little Pine Low Carb 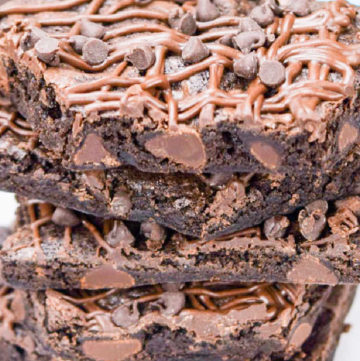 Do you only like the crispy parts of brownies? hen my Brownie Bark recipe is for you! All the crispy deliciousness of brownies in a candy-dessert fusion!
Prep Time15 mins
Cook Time45 mins
Total Time1 hr
Servings: 6 -8 servings
Author: Kathleen