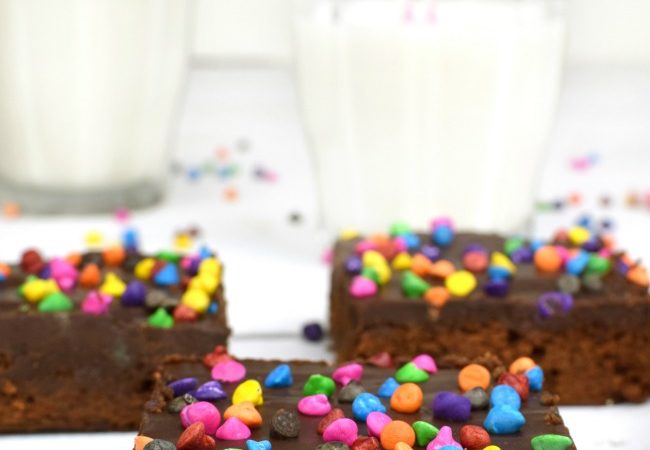 Rich, fudgy Brownies topped with a wonderfully thick, chocolate ganache frosting. These are an amazing homemade copycat version of Little Debbies Cosmic Brownies!  Pin it to your DESSERT BOARD to save for later! Be Sure To Follow Gonna Want Seconds on Pinterest for more great recipes! Take a trip down memory lane with me: you 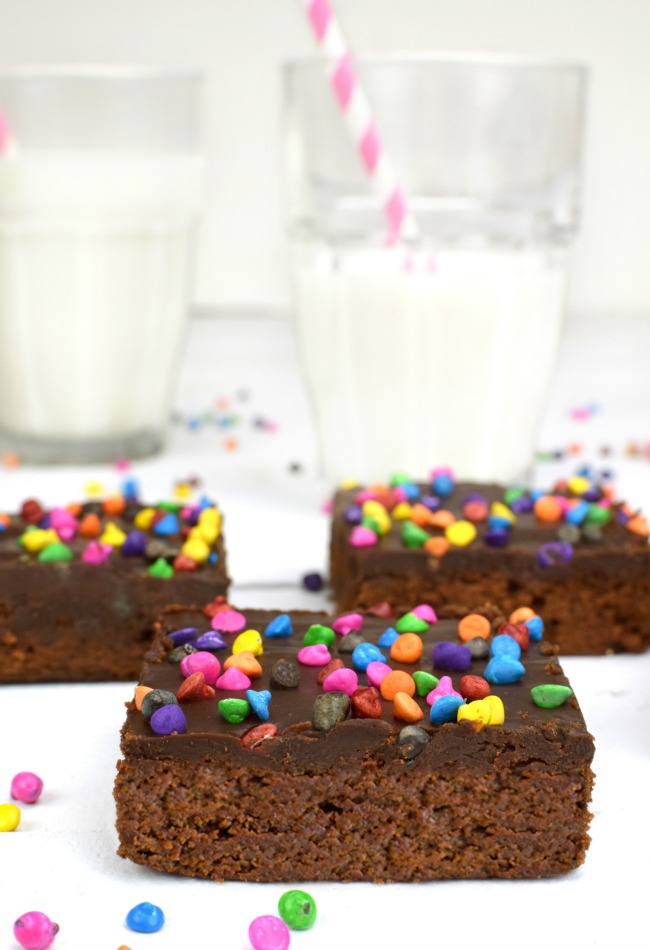 Take a trip down memory lane with me: you are in elementary school, sitting in a big cafeteria.

In front of you sits your lunch box, decorated with whatever cartoon character you happened to be in to at the time. As you open the box, you see a sandwich, an apple, maybe a bag of chips, and – yes! – a delicious little treat.

You may see a different treat than me in that box, whatever dessert is most nostalgic for you.

I see a package of Little Debbie’s cosmic brownies.

When I was a kid, I was crazy about cosmic brownies. They were my all-time favorite lunch treat. My mother wouldn’t pack them for me all the time – just for a special occasion. (Like maybe I did well on a test, or finished an assignment, or got an attendance award.)

Finding one of these brownies in my lunch box was a little celebration for me. All of the other kids would beg me to trade with them, the best thing in their lunch box for my cosmic brownies.

But no way! I wasn’t crazy enough to trade away a cosmic brownie.

Now that I’m all grown up, you might think that when I want cosmic brownies Walmart is where I go.

But actually, nowadays I get cosmic brownies from my kitchen.

This copycat cosmic brownies recipe is every bit as chewy, fudgy, and oh-so-yummy as Little Debbie’s original boxed brownies. In fact, this combination of cosmic brownies ingredients yields a snack that is richer, fudgier and has a better chocolate flavor.

And, unlike the original, these brownies contain NO preservative and NO hydrogenated fats – which is an awesome thing in its own right.

They created these in the 1950s (which answers that age-old question, “When did cosmic brownies come out?”).  The brownies are a very chewy fudge-brownie, topped with little-candy-coated chocolate pieces.

These nostalgic treats will put a smile on your face, and on the faces of anyone you serve them to.

Serve these as an afternoon snack, or at a potluck or gathering. You are sure to see people’s eyes light up as they say, “I remember these!” and give a big thumbs up as their cosmic brownies review. 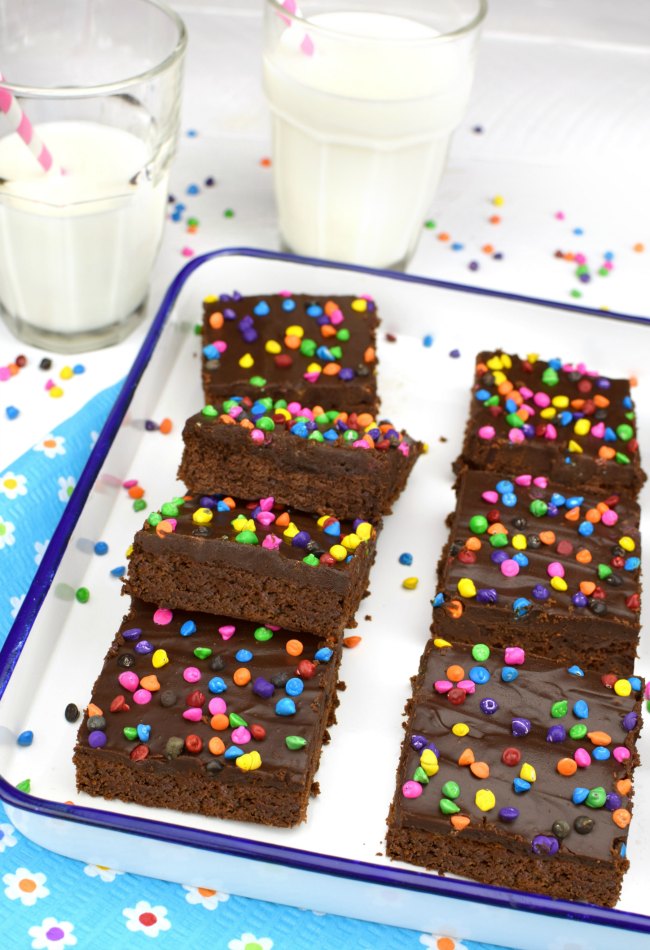 Candy Topping: Of course, what makes a cosmic brownie a cosmic brown is the little candy pieces on top. Without them, it is basically just a fudge brownie (still good, but not technically a cosmic brownie). My go-to candy topping is Wilton Rainbow Chip Crunch. I buy these on Amazon, but you can typically find them anywhere you buy cake-decorating supplies (like Michael’s, Jo-man’s Crafts, or Target/Walmart).

If you can’t find Wilton Rainbow Chip Crunch, or if you’re interested in using a different topping, I would recommend trying mini M&Ms. They’re a great choice – in fact, I actually prefer them (slightly) in flavor to the Rainbow Chips. The only reason that I don’t use mini M&Ms as my normal topping is that the color tends to fade. After you let the brownies sit in the fridge, or if you freeze them, the color of the M&Ms just isn’t as bright – it’s a little bit funky and dull. The Rainbow Chips, however, keep their color.

In a pinch, you could substitute sprinkles (preferably the bright, round sprinkles) for candies. They will not provide the same texture as the Rainbow Chips and mini M&Ms, but they still give off that fun splash of color and slightly candied taste.

If you’re in an experimental mood, you could go totally rogue and try something different altogether. Chopped nuts (like on Little Debbie’s Fudge Brownies), chocolate chips, or chocolate shavings all make yummy toppings for cosmic brownies. Honestly, I’ll occasionally bake the brownies, frost them, and serve them without any adornment whatsoever. (This is the cheapest option. So if, when you’re making cosmic brownies price is an obstacle – you may want to consider serving them plain.)

Frosting: Instead of a plain frosting, this cosmic brownies recipe crowns your brownies in a simple, easy to make, fudgy ganache. (For those who don’t know, ganache is a creamy, chocolate glaze/icing used most commonly in pastries.) The ganache is thick and rich, it cuts nicely when you slice the brownies and compliments, rather than overrides, the taste of the brownies. I strongly recommend that you wait until the ganache sets before cutting the brownies.

You’ll want to let the brownies cool completely before cutting into them.

Calories: Like any dessert, a cosmic brownies calories are mostly empty calories. They are a dessert. And just like my mom was careful how often she put these in my lunch, a nutritious meal plan will include cosmic brownies sparingly, not as a regular part.

Freezing: If you want to freeze these brownies, there are a couple of ways you can go about doing it. The standard way is to wrap up the uncut brownies in a double plastic wrap, and then a layer of aluminum foil. To thaw, you’ll remove the plastic wrap and foil, then let the brownies sit out at room temperature for 3-4 hours.

Alternatively, you can cut them into individual pieces and store them Ziploc bags, removing as much air as possible. These bags can go right into the freezer, and the thawing instructions are basically the same.

Mom Tip: consider putting a layer of waxed paper over the brownies before wrapping them up to be frozen. This will keep the frosting in place and also help prevent things from getting watery when the brownies are thawing. 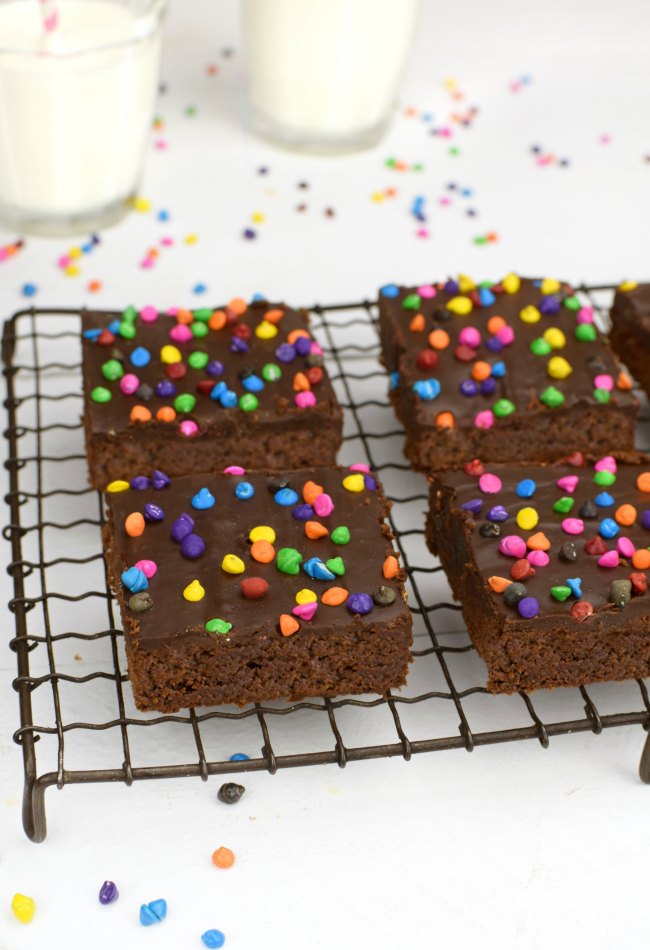 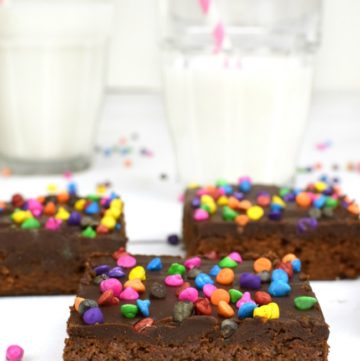