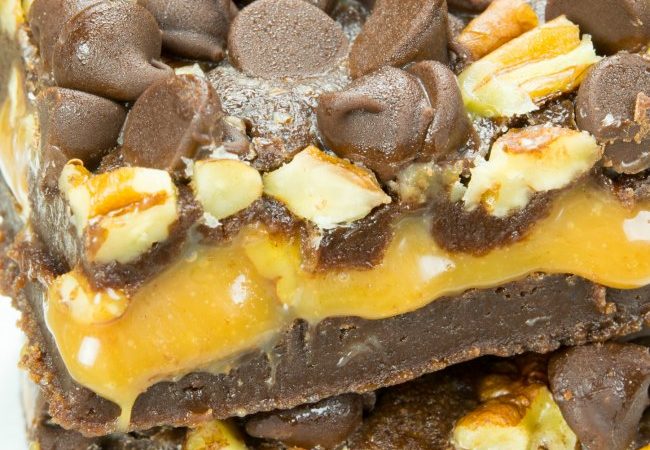 Caramel Stuffed Brownies are your tickets to brownie bliss – fudgy brownies wrapped around a thick, caramel layer, with crisp pecans and chocolate chips. Bring on the sweet, sweet chocolate coma! Pin it to your DESSERT BOARD to save for later! Be Sure To Follow Gonna Want Seconds on Pinterest for more great recipes! Politics

Caramel Stuffed Brownies are your tickets to brownie bliss – fudgy brownies wrapped around a thick, caramel layer, with crisp pecans and chocolate chips. Bring on the sweet, sweet chocolate coma! 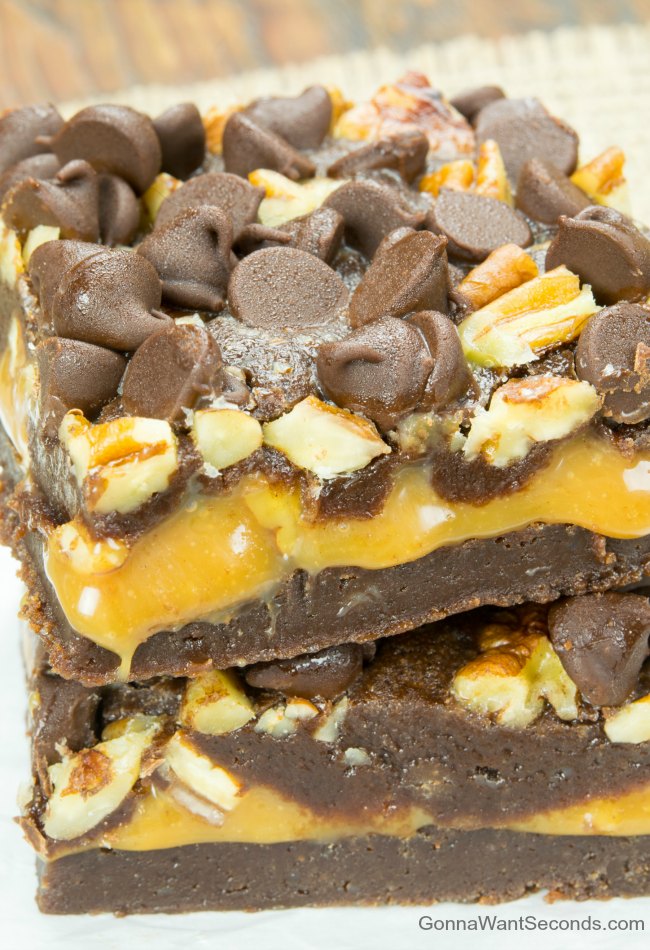 Politics and football are two divisive topics we usually try to avoid at family gatherings. There’s only one thing more polarizing, something that makes tempers flare and parties retreat to their opposing corners with extreme prejudice.

Brownies. Some connoisseurs are staunch purists, requiring a thick, fudgy square of chocolate without any nuts, marshmallows, or even chocolate chips to get in the way. Others are mavericks, incorporating everything from cream cheese swirls to chili powder, even stuffing brownies with cream-filled cookies, macaroons, or peanut butter cups.

Some demand leavened, light cakey confections, while others prefer brownies so soft and gooey you have to eat them with a spoon.

I like to consider myself a moderate, so I can eat, bake, and love them all!

This easy Caramel Stuffed Brownies recipe has enough fudgy chocolate to win over the purists, with a sticky-sweet caramel filling and lots of chocolate chips and pecans for those who enjoy contrasting flavors and textures.

These caramel stuffed brownies are truly epic – rich, decadent brownie heaven, and this may just be the recipe that unites us!

Origin stories are often hard to track down, but one commonly accepted version traces brownies to The Windy City. Like all good things, brownies were developed at a fair, the Chicago World’s Fair in 1893 (also called the World’s Columbian Exposition), to be exact. Fairs are a well-known breeding ground for mind-blowing culinary discoveries, things like Frito pie and fried everything, so it’s no wonder brownies popped up here.

They were a snack commissioned by Bertha Potter Palmer (whose husband owned the Palmer Hotel in Chicago) as a portable chocolate cake to share with the Ladies Board of Managers for the Exposition. That recipe was preserved, and the brownies are actually still served at The Palmer House Hilton in Chicago.

They also served as a catalyst for the chocolate-loving bakers on the planet to head into their kitchens for some seriously tasty experimentation.

Nowadays you can find brownie bits suspended in pints of ice cream, cleverly disguised as cereal or granola bars, or as a crust for cheesecake.

You’ll also find plenty of box-mix options for whipping up a pan of brownies with little more than eggs, oil, and a little stirring. The truth is, I think using the mix has made us forget just how easy it is to make brownies from scratch! There’s really no comparing the quality and satisfaction of cutting into a fresh pan of homemade caramel stuffed brownies vs. something that started with a mix (plus you’ll miss out on sneaking in a nibble or two of the chocolate chips while you’re working on that batter).

Although the end result here is a sophisticated, magazine-cover-worthy brownie. They really are simple to put together, so save your box mix for another day.

From an ingredients perspective, brownies are basically chocolate cake with less leavening and flour and a lot more chocolate.

The type of fat and chocolate used are really what separates soft, chewy brownies from those with a fudgy, firmer texture.

Just think about what the ingredients look like at room temperature. If you use chocolate and butter, you’ll have a more solid result; if you use oil and cocoa powder, it’ll be softer.

This caramel stuffed brownies recipe is “firmly” in the butter and chocolate camp, which produces a rich chocolate layer substantial enough to bookend the caramel filling.

Most cakes start with creaming butter and sugar, but many brownie recipes melt the butter first. The creaming process adds air to the batter, which makes the end result more cake-like, and we don’t want light and fluffy brownies here.

We’re looking for dense, fudgy bites of chocolate. To ensure they’re as rich as possible, you’ll use bittersweet or semisweet chocolate. These higher-cocoa content products are less diluted with sugar and milk and carry hefty notes of all the fruity, nutty, slightly bitter flavors we love about chocolate.

The filling is a simple combination of melted caramels and heavy cream, but it adds a lovely, luscious texture that contrasts nicely with the fudgy brownie layers.

You’ll need to bake half of the brownie batter in the bottom of the pan before adding the caramel so the bottom is stable enough to support the liquid gold. In the end, you’ll be grateful for the stability it provides and the ability to eat these with your hands instead of messing up utensils.

The topping for these scrumptious, life-changing Caramel Stuffed Brownies is a combination of chocolate chips and chopped pecans (toasted, of course) to create creamy little bites of solid chocolate and a nutty crunch so perfect even no-nut brownie advocates will approve.

I could talk about how long these will last, but let’s be honest. They’re not going to last long.

Caramel Stuffed Brownies are highly sought after holiday gift among my friends and family, so just be warned that sharing these with others will mean repeated requests for more! 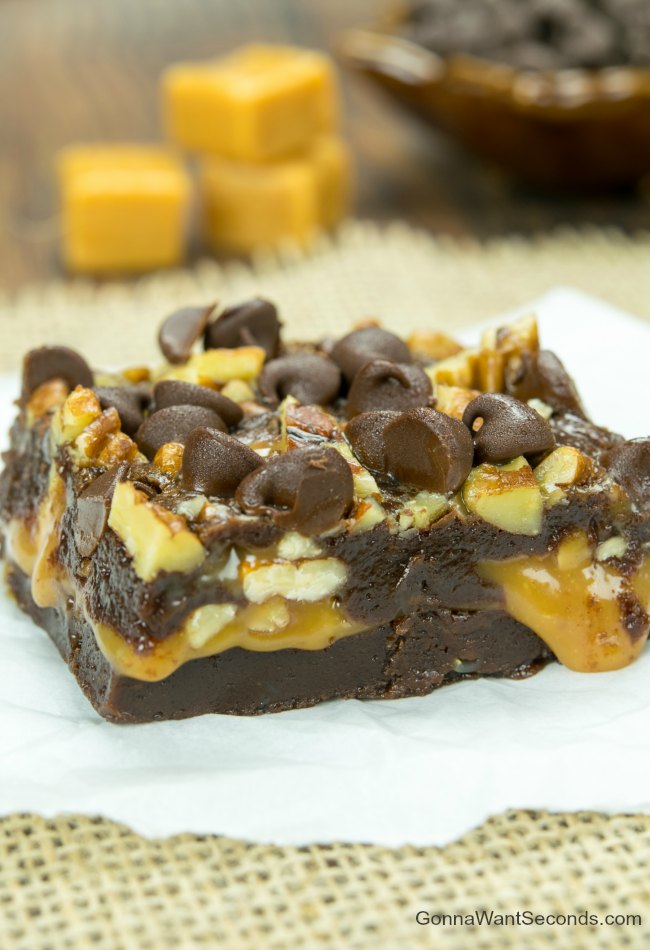 Caramels – Unwrapping 45 to 50 caramels can be a bit of a pain, and enlisting the help of others may result in disappearing caramels. One tip is to put the bag of caramels in the freezer for a few minutes to help the wrappers come off more easily. If you have a lot of caramel projects on the baking agenda (which I often do during the holidays), you can also find blocks online or in specialty candy stores to save some time.

Eggy stuff – Overbaking is one of the quickest ways to ruin baked goods, including brownies, so managing the cooking time as much as possible is important. Having your refrigerated ingredients (specifically eggs, in this recipe) at room temperature will help here. If you’re like me and forget to take out your eggs ahead of time, you can place them in a bowl and cover them with warm tap water for 10 or 15 minutes.

Muffin Tin Option – You can cook these brownies in muffin tins, either greased or lined with cupcake wrappers, as either a futile attempt to mitigate your own intake or to make gift-giving a little less messy.  Depending on your oven, they may not need to cook as long, though, so I’d suggest shortening the first bake to 15 minutes, then bake them another 15 minutes after adding the caramel layer and remaining batter. Just watch them carefully and remove them from the oven once you get a clean toothpick out of the top. 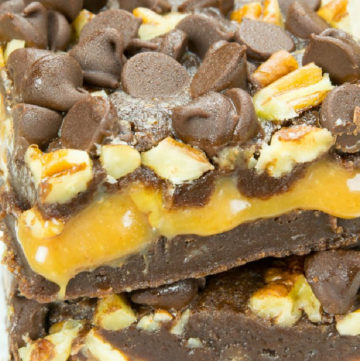 Looking for a low carb version? Check out this recipe!