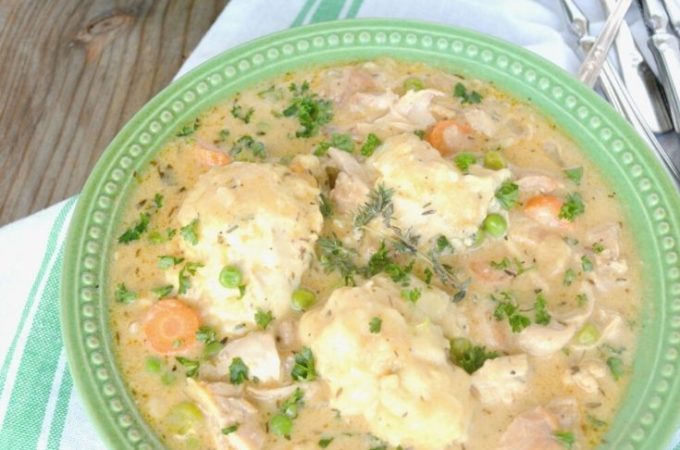 Hearty, homemade Crockpot Chicken and Dumplings taste just like grandma used to make but without spending all day tied to the stove! Perfect for a cold day!

Crockpot chicken recipes are so easy to make, and this crockpot chicken and dumplings recipe will make your family think that you spent all day on it! I won’t tell them if you don’t!

Fire up the slow cooker and let’s make some dumplings! 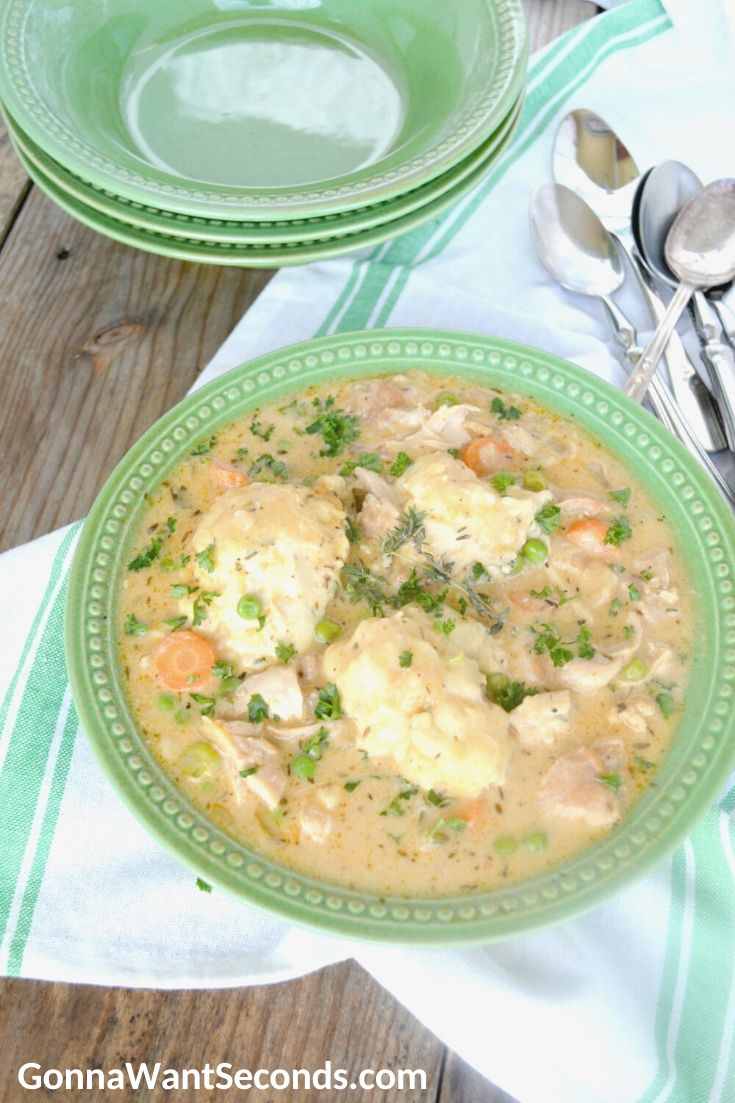 I’ve never met a bowl of dumplings I didn’t love. Southern-style, Bisquick, you name it- they’re all delicious, but this crockpot chicken and dumplings recipe stands out among the crowd. Here’s why! 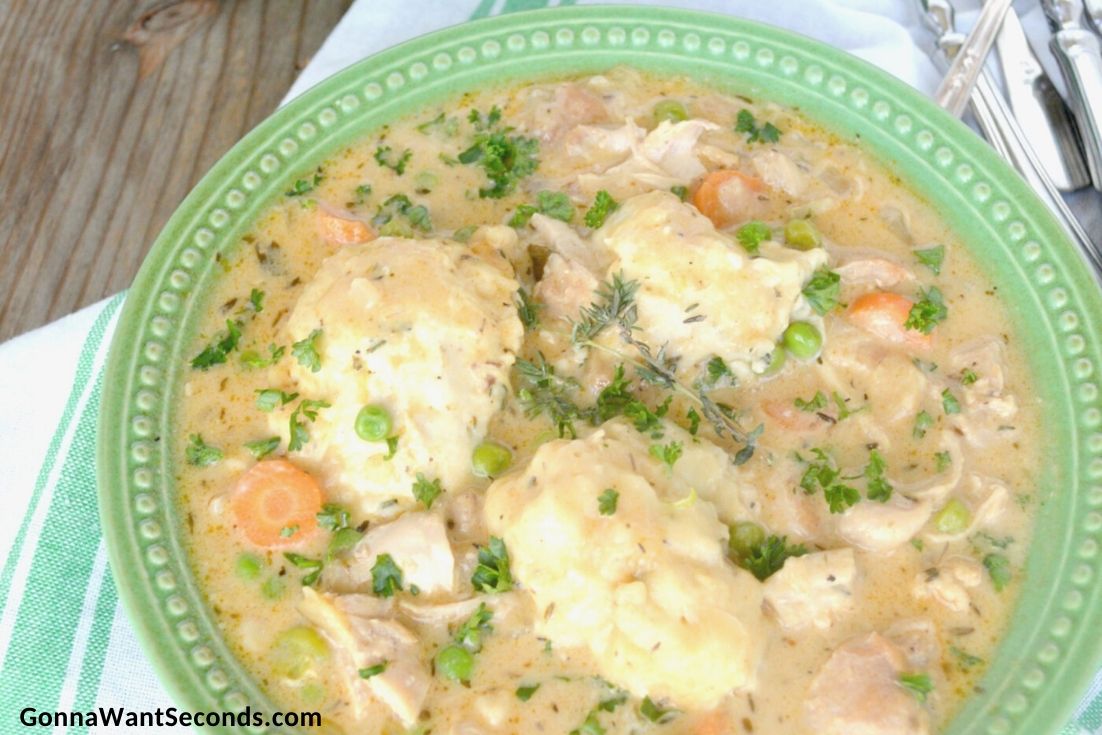 This Slow Cooker Chicken and Dumplings recipe is made in stages. Here are some extra tips to make it even easier!

Browning The Chicken: This is a really important step. I know you’re tempted to skip it, but here are a few reasons why you shouldn’t. It seals the exterior of the chicken and keeps it nice and juicy when it’s all cooked.

It leaves little brown bits, which the French call fond, in the bottom of the pan that adds crazy amounts of flavor to the stew. Some of the veggies are browned in the same pan after the chicken, then flour, sherry and some of the chicken broth are whisked in, to deglaze the pan. That’s when all the little brown bits are swooped up and added to the crockpot to create another layer of delicious flavor to the sauce.

Making the roux: A roux is made by whisking together a fat, typically butter or oil, and flour. The key is to whisk like crazy. Once your mixture is smooth, it’s important to let it cook for a minute to break down the flour a bit. Then, GRADUALLY add in the liquid, once again whisking to keep it smooth.

Chicken:  This recipe uses boneless, skinless chicken thighs. I was initially skeptical, but after the first time I made it, I understood the brilliance of this switch-a-roo.

Using the thigh meat keeps the chicken moist and tender during the extended cooking time, typically used to cook it, in the slow cooker. The white meat on a whole bird can be overcooked and dry out in this longer cooking time.

Using a “skinless” thigh, as opposed to one with the skin left on, keeps the sauce from becoming greasy. If the skin is left on, the fat it contains will melt during the cooking process, and the texture of the stew can go from being creamy and velvety to an oily mess. Both types are readily available at most grocery stores so your choice is easy.

The chicken is then added to the slow cooker, cooked until it’s tender, on low for 4-6 hours. Then it’s removed from the slow cooker and, when it’s cool enough to handle, shredded or cut into bite-size pieces.

Veggies – The carrots aren’t browned, they’re added directly to the crockpot at step 3 in the instructions.  The peas are added to the stew last when the chicken has been cut and is added back.

I’ve got lots of veggies in this recipe, so it makes this crockpot chicken and dumplings healthy- or at least on the healthier side of things! You can always add more veggies if you like!

Make sure the dumplings are cooked all the way through. The amount of time this takes can vary significantly from one crockpot to another. Please remember that the cooking time given in the recipe is an estimation.

The bottoms of the dumplings will obviously still be wet because they cook directly in the liquid of the stew. The centers of the dumplings, however, should no longer have any “rawness” to them.

Full-fat dairy- Butter is the boss in the kitchen. It’s important to use full-fat butter. The fat is important to a tender dumpling. Also, you need to use whole milk for the best results.

Sauce: The foundation of the sauce is chicken broth. I typically use store-bought. It works out great. If you have homemade on hand it would be amazing in this recipe.

The chicken broth is then enriched with a little bit of tomato paste, sherry and Better than Bouillon~Chicken Flavor. The tomato paste gives the sauce its orange hue. While it may not be as traditional as the plain white hue, generally seen in Chicken and Dumplings, trust me this sauce is crazy delicious so you won’t mind a different color!

The sauce is really thick and rich with just the right amount of creaminess. Don’t worry, it’s not in any way too heavy. The recipe calls for just a half a cup of heavy cream. The cream adds a nice level of richness and creaminess to the broth that wouldn’t otherwise have. Believe me, you’ll miss it if you don’t add it. 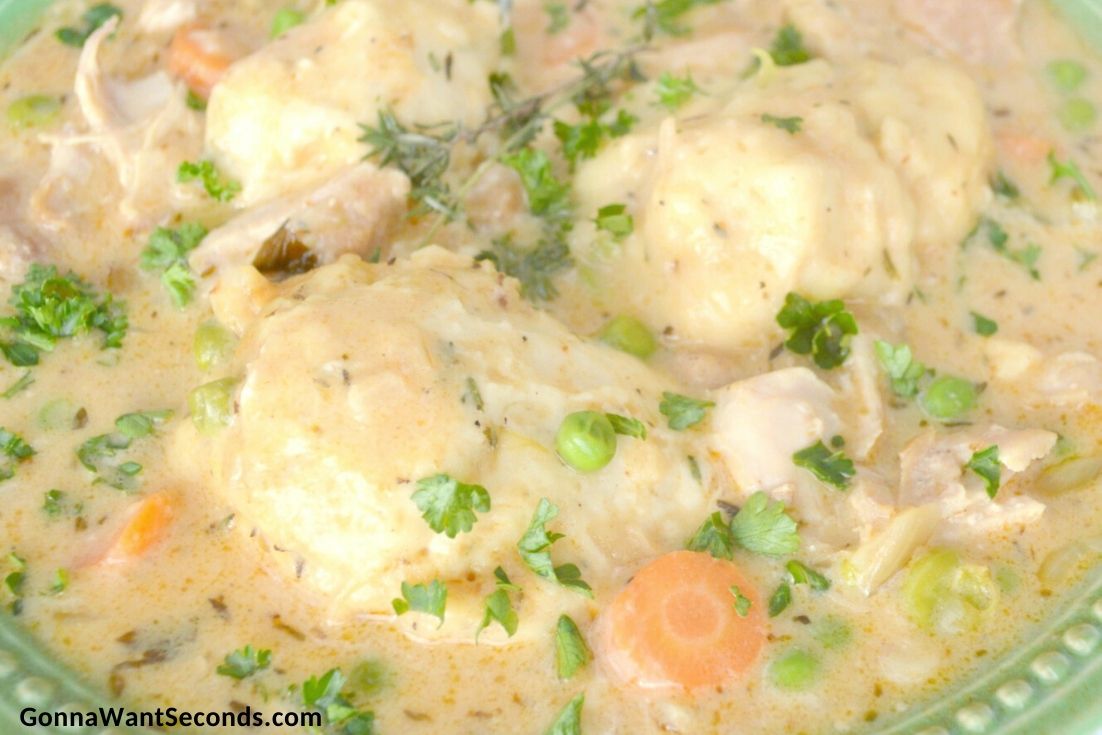 Make sure you allow this Crockpot Chicken and Dumpling recipe fully cool before putting it in the fridge. Also, you’ll want to use a well-sealed container to hold in moisture and flavor.

You can freeze this crockpot chicken and dumplings recipe. Just be aware that since there is heavy cream included, it might not hold its texture perfectly. Cream sometimes splits when it freezes. The overall dish might be very thick when you reheat it as well. Loosen it up with some extra chicken stock if you need to.

One of the best ways to make this dish ahead of time is to make up to the point where you add the cream. Cut the chicken and store it in the fridge with the broth with the veggies. When you’re ready for it, bring it up to temperature in the slow cooker and carry on with the peas, parsley, and cream.

The FDA guidelines instruct that this crockpot chicken and dumplings recipe should keep for 3-4 days in the fridge. 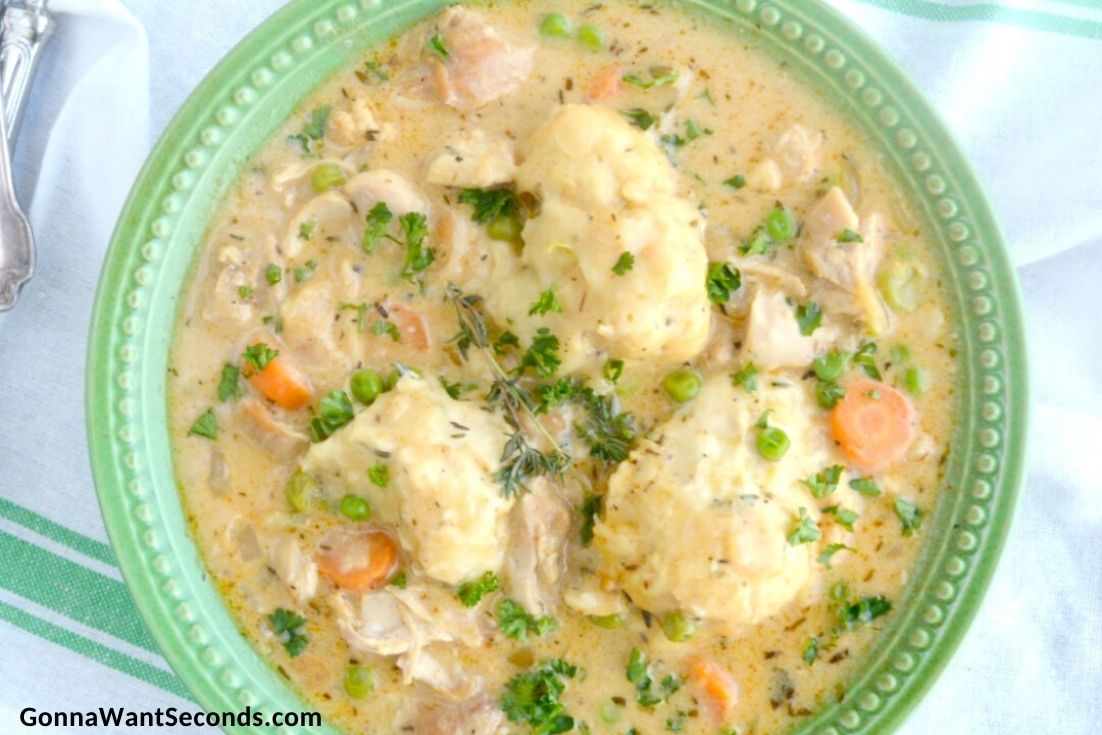 This crockpot chicken and dumplings recipe is an excellent inspiration for lots of other yummy chicken recipes.

Can I Turn This Into Pot Pie?

The sauce and veggies in this recipe are very similar to a crock pot chicken pot pie without the crust. While I love the crusty version of pot pie, chicken pot pie soup is a simple way to enjoy pot pie yumminess without fussing with a crust!

Can I Make This With Enchilada?

Can I Cook This In An Instant Pot Instead?

Can I Add Rice?

What Other Chicken And Dumpling Dishes Can I Make?

Another great quick and easy dumpling variation is Bisquick chicken and dumplings. You get a nice fluffy dumpling with minimal measuring and ingredients! 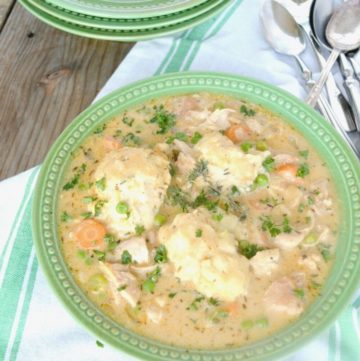 Chicken soup dishes don’t stop at chicken noodle soup. They’re all delicious and can warm you up inside and out!

Chicken and dumplings have always been one of my favorite comfort foods. This crockpot chicken and dumplings recipe bring all that homemade comfort to your kitchen with the ease of the slow cooker! It’s always a hit wherever I serve it. I look forward to hearing how it works for you.