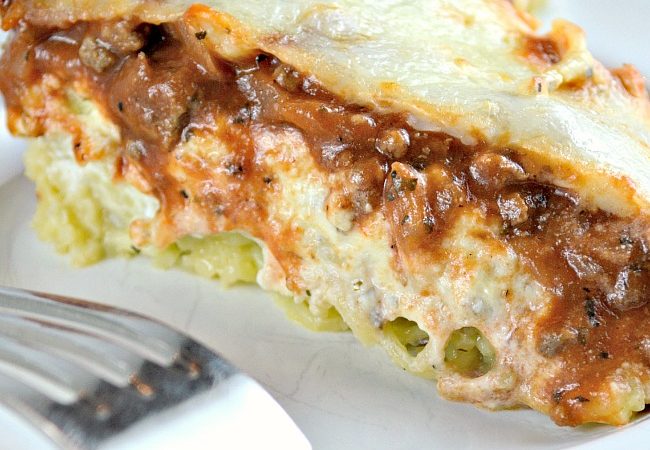 Of all my pasta recipes, I think spaghetti pie might just win top marks for fun and taste. I’ve got lots of spaghetti recipes, but the layers of pasta crust, cheese, meat sauce, and more cheese are served like something straight from pie heaven.

The buttery, garlicky crust sets the whole thing up, and the creamy cheese layer in the middle pairs beautifully with the meat sauce on top. On top of all that deliciousness, the presentation is stunning! This spaghetti pie recipe is a show stopper but fear not, it’s very straight forward to assemble.

Let’s head to the kitchen and get to it! 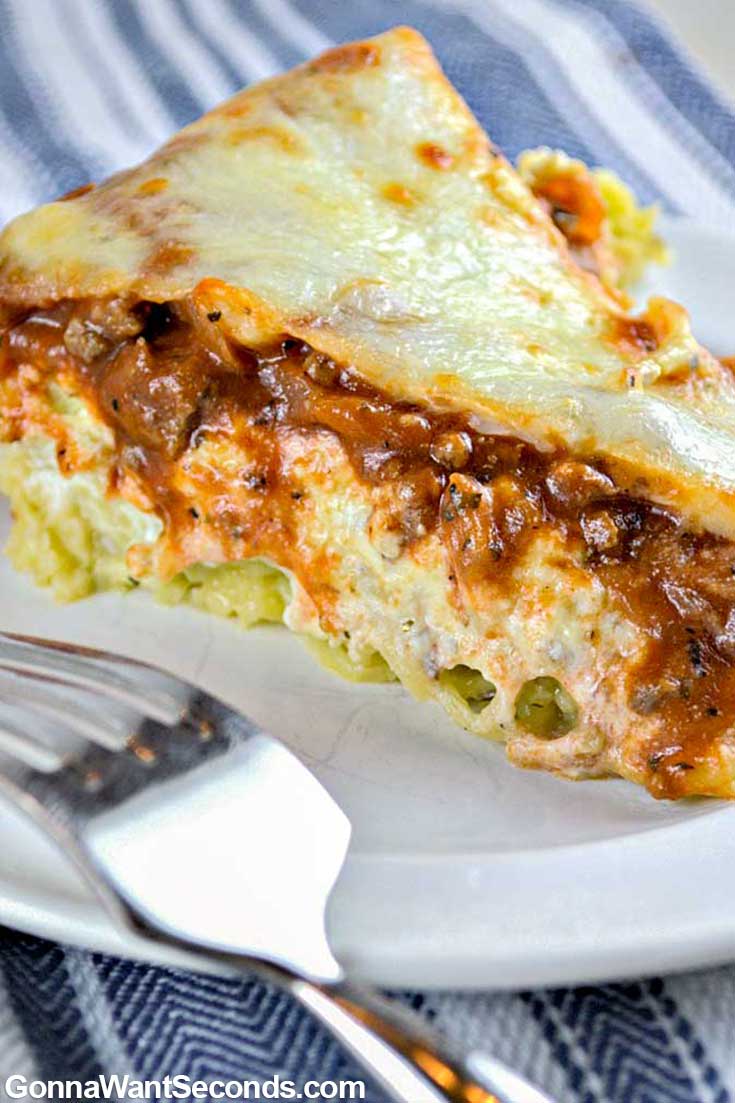 What I Love About Spaghetti Pie Recipe

This Spaghetti Pie recipe is over the top in taste and presentation, and I always get rave reviews. The things I love most of all are: 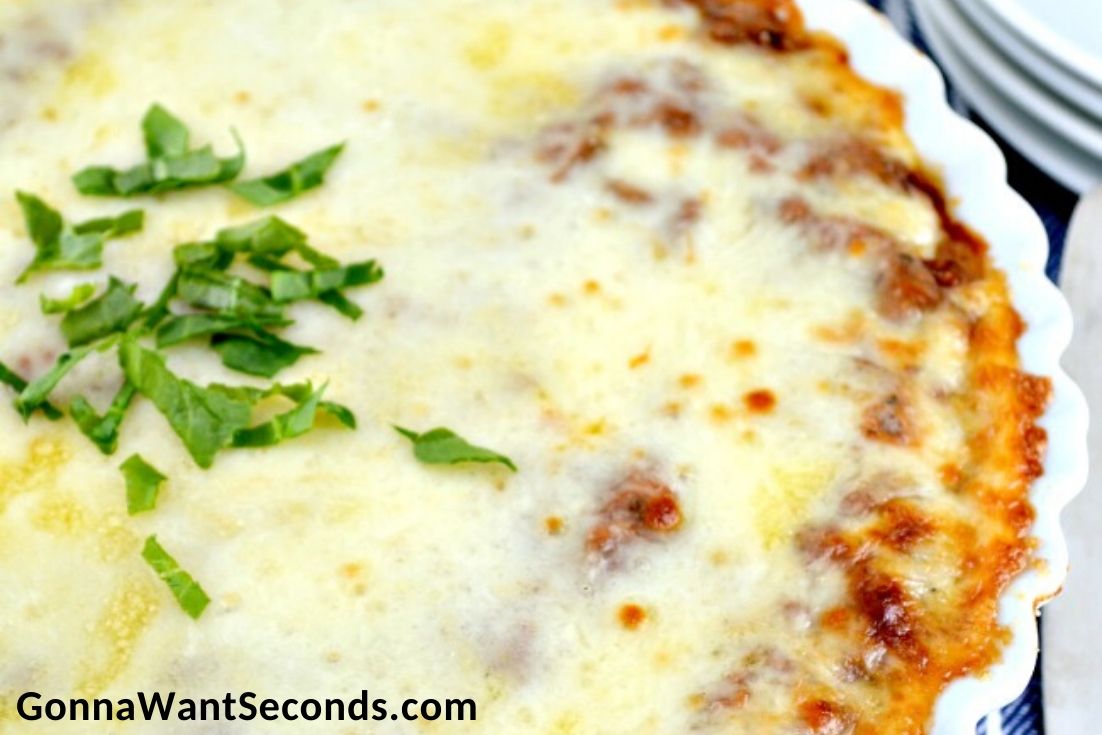 Overall, you’ll find this is a very straight forward recipe. It has several steps, but don’t let that intimidate you. I’ve got a few tips for you to make your spaghetti pie recipe the best it can be!

Proper Pasta Prep- It’s essential to use proper pasta cooking techniques with your vermicelli noodles. Be sure you’re boiling in plenty of well-salted water and don’t overcook them. These noodles are very fine, so they’ll cook quickly.

Also, I suggest melting the butter, cheese, and herbs first and then stirring in the egg. This lets them cool down slightly so you don’t accidentally cook the egg.

The Crust- This isn’t like a pie crust that comes up the sides of the dish. I just press it firmly into the bottom. Be sure to use a deep enough dish to allow plenty of room for the layers.

You can switch up a few things with your baked spaghetti pie recipe ingredients if you want to tweak the recipe a bit.

Meat- you can certainly use Italian sausage instead of the ground beef. Ground turkey would work as well.

Veggies- If you want to add veggies to your meat sauce, just monitor the moisture level. You don’t want to make it too soupy.

Vermicelli- Angel Hair is the same type of pasta as Vermicelli. You could use spaghetti in a pinch, but your crust won’t be as dense. I would worry that it won’t hold together as tightly. It would, however, still taste delish!

Nutmeg- It’s actually a pretty common variation in traditional lasagna. If you’re not a fan, simply omit it!

This will store nicely in the fridge in a well-sealed container. Exposed edges run the risk of drying out, so be sure to wrap it well!

This freezes really well. I suggest freezing before baking for best results. Simply follow the instructions up to the point of baking and let the pie completely cool. Wrap it in a couple of layers of cling wrap and a layer of foil. It should keep for about 2 months.

The best way to make spaghetti pie recipe ahead of time is to do everything but bake it. Allow it to cool and cover tightly with cling wrap.

It will keep for a day or two in the fridge. Bake as directed. If you’re baking straight from the fridge, you’ll need to factor in a little extra cook time.

Leftovers will keep for 3 days in the fridge in a well-sealed container. 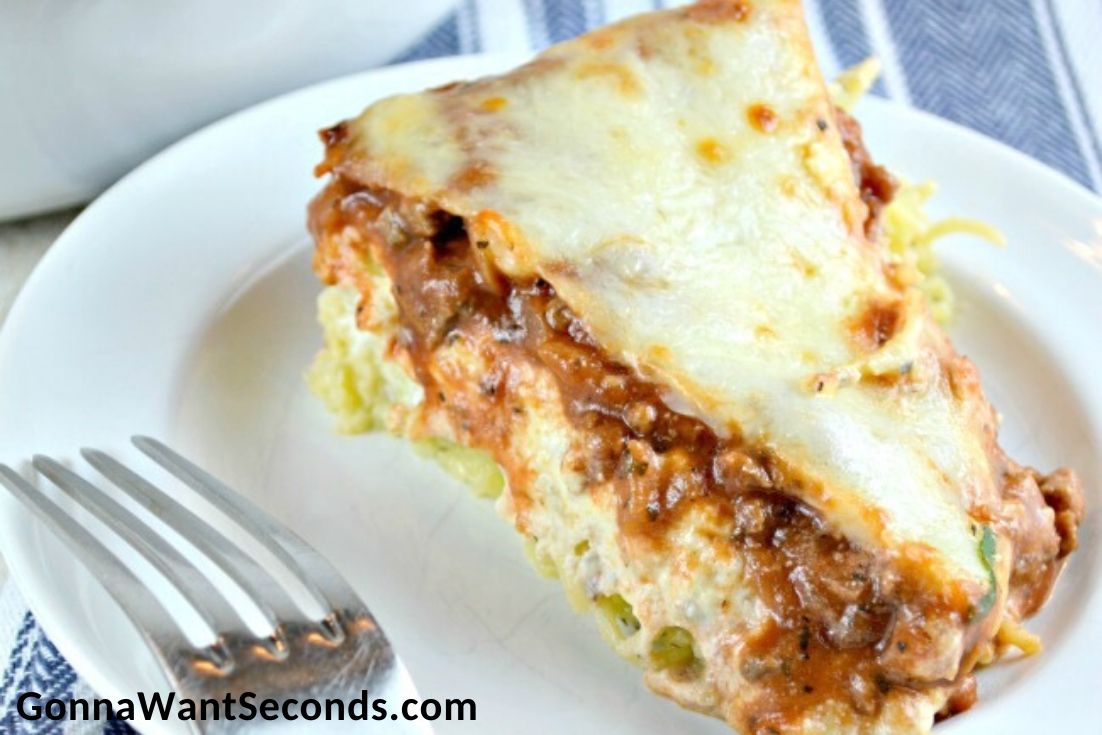 There are several different variations of spaghetti pie recipe you can try. Never be afraid to experiment and put your twist on it! Here are some common ideas for variations.

What Other Bake Spaghetti I Can Try?

I love baked spaghetti! I’ve been hooked since I first tried it! I developed my creamy, decadent baked spaghetti with cream cheese years ago, and it remains a frequently requested dish in my house!

Can I Cook This In An Instant Pot Instead?

Can I Make Into A Casserole?

I think you’d lose a lot of the character of the dish if you didn’t make the crust and layers. If it’s a true casserole you’re looking for, my million dollar spaghetti has you covered. It’s creamy, meaty, noodley spaghetti casserole perfection!

Can This Be Made With A Mexican Twist?

Taco spaghetti is delicious south of the border twist on traditional Italian flavors. Those flavors would be great in this dish. You could make the sauce in my Mexican spaghetti and use it instead of the meat sauce below. Be aware, you would only need 1/2 the sauce for the meat layer in this recipe. You could also use 1/2 pound of taco meat. 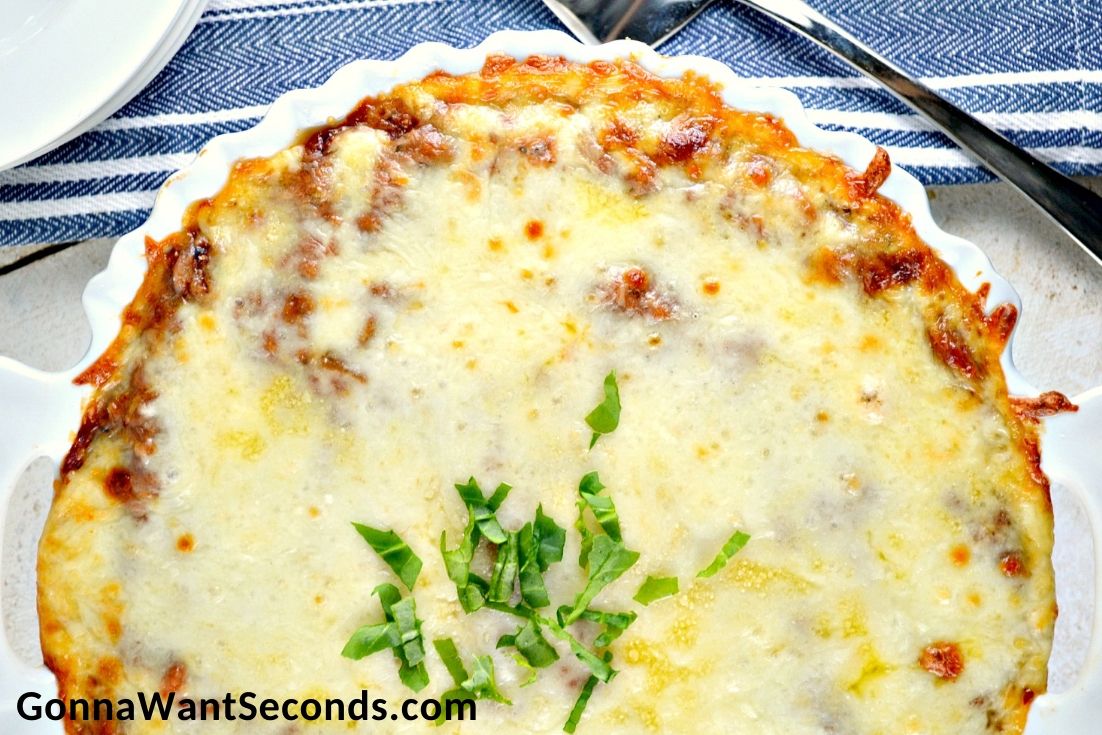 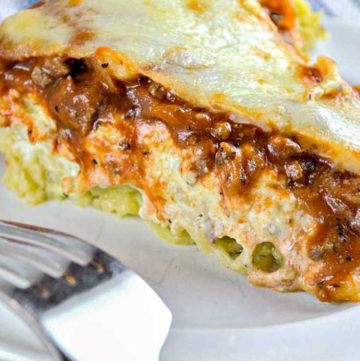 You can’t get more classically Italian than spaghetti! I’ve got loads of spaghetti dishes, so you can keep making a fresh take on this family favorite!

Spaghetti Pie recipe isn’t tricky make, but it looks and tastes like you’ve pulled off a bit of culinary wizardry. Of course, I’ve always thought of the kitchen like a magical place, so I wouldn’t disagree that there’s a bit of magic in all food that comes from the heart.

I know you and your family are going to love this fun, decadent twist on plain-Jane spaghetti! I look forward to your comments, so be sure to let me know how it works for you!