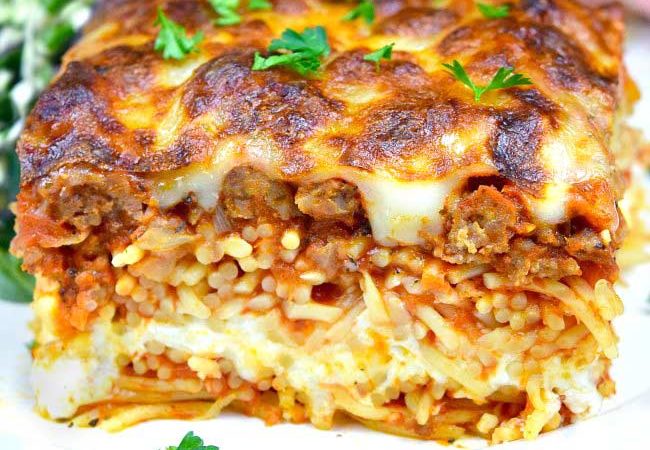 Million Dollar Spaghetti brings the best of spaghetti to the best of lasagna and marries them together. Don’t shy away from this crowd-pleasing casserole!

Welcome to “Million Dollar Spaghetti,” the show where you compete to win a million dollars against a plate of spaghetti– oh, my producer is saying this isn’t a game show, it’s one of the most scrumptious pasta recipes!

This dish is part spaghetti and part lasagna. With three different kinds of cheese, Italian sausage, and a half cup of butter.

And that is the real reason this is called Million Dollar Spaghetti. Because, of all the delicious spaghetti recipes, this packs such a flavor punch, you’ll say “This tastes like a million dollars!”

So let’s get started! 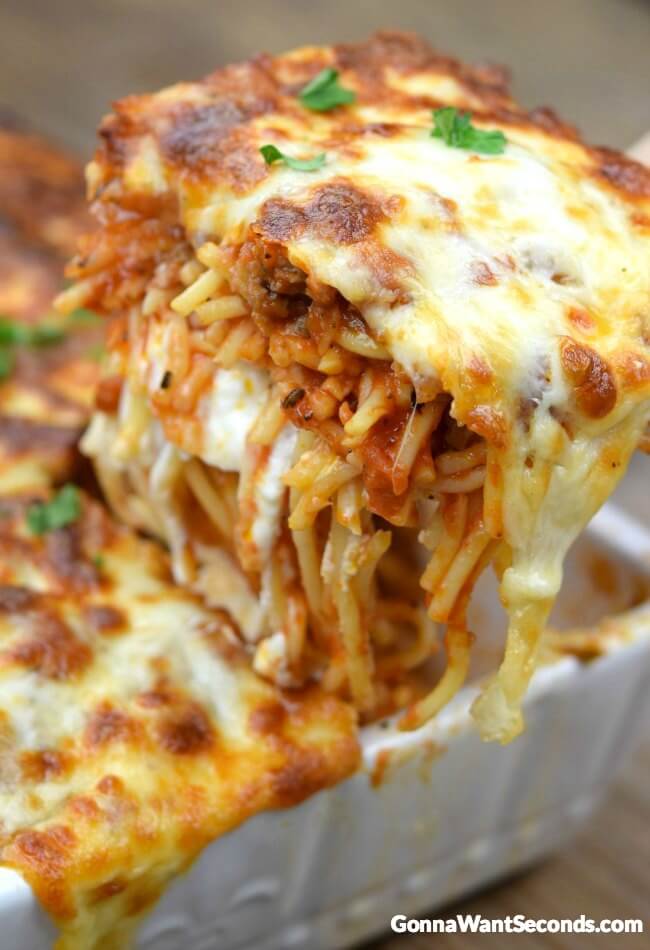 What I Love About Million Dollar Spaghetti Recipe

How To Make Million Dollar Spaghetti 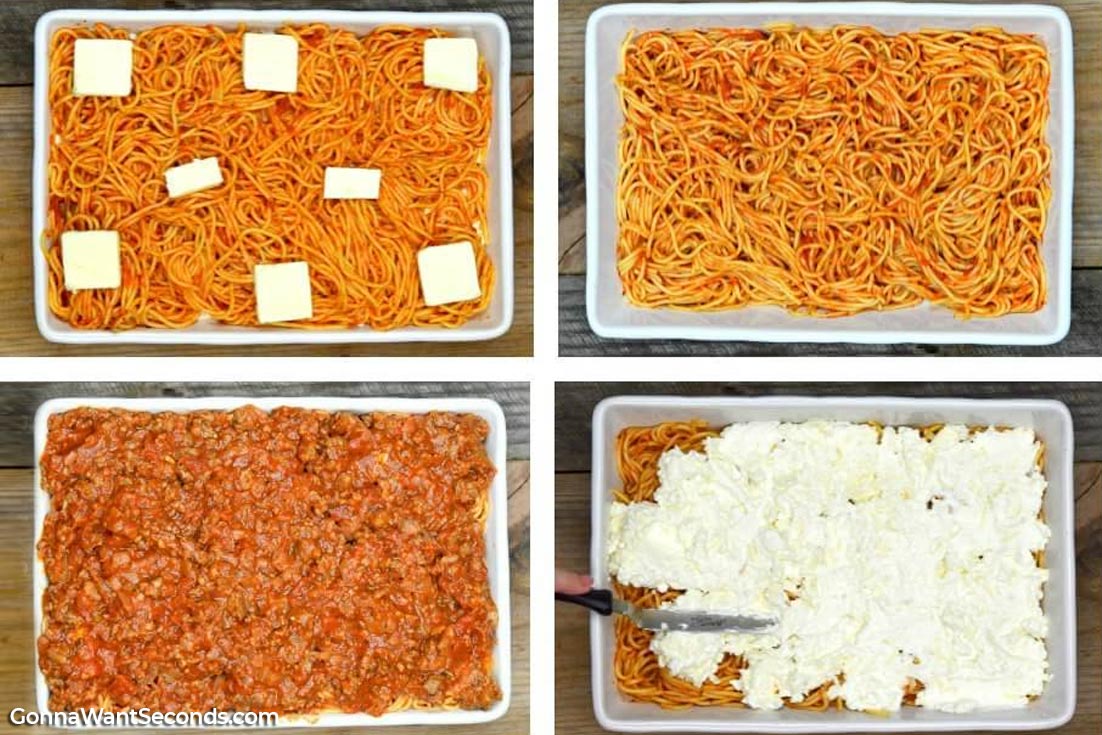 Spaghetti is one of the staple dishes in most households — which means you likely already have most of these ingredients in your pantry!

Does that say cottage cheese? Yes, it does. Before you dismiss Million Dollar Spaghetti for that quirk, hear me out: cottage cheese is a mind-blowing ingredient that far too many people avoid, thinking their food will turn out tasting too “curdled.” That is not the case at all!

Cottage cheese adds a fabulous creamy texture to foods as well as hearty servings of protein. But if it still seems just too odd for you, ricotta cheese is a perfectly acceptable substitute! Use the same amount as the cottage cheese. As is traditional with pasta dishes, a healthy sprinkling of parmesan cheese is a great final touch to this dish.

Spice it up! The dried Italian seasonings and the sausage, as well as the extra spices you add to Million Dollar Spaghetti, will give this casserole that zesty Italian kick — but try tossing in a handful or two of chopped fresh basil or oregano, especially as a finishing garnish.

This recipe looks familiar . . . And it might! Million Dollar Spaghetti has been making the rounds in recent months, particularly on Facebook. This family-pleasing dish has many versions sprinkled across the web, but this is the only one I’ve found that has that certain extra umph. Is it because of the deep creaminess of the cottage cheese? Is it because of the tang of the sour cream? Is it because of that eyes-roll-back-into-your-head goodness of sweet Italian sausage? Yes. Yes to all.

Pre-cook your sausage! If the term “casserole” makes you think “add everything to a dish and bake it,” think again! There is some prep that must be done ahead of oven baking — such as fully cooking your Italian sausage. Save your family severe stomachaches!

Pasta: Spaghetti noodles aren’t the only kind of pasta that can go into this dish. It works pretty darn well with a bunch of other shapes of pasta. My favorites with this dish are ziti or rigatoni.

Meat: I use Italian sausage in my recipe, and man, is it good. The extra flavor added by that sausage is simply outstanding, and really makes this recipe a true crowd-pleaser. If you or your audience are not particularly fond of sausage, you can absolutely use ground beef instead, but I don’t think the final flavor is as robust. 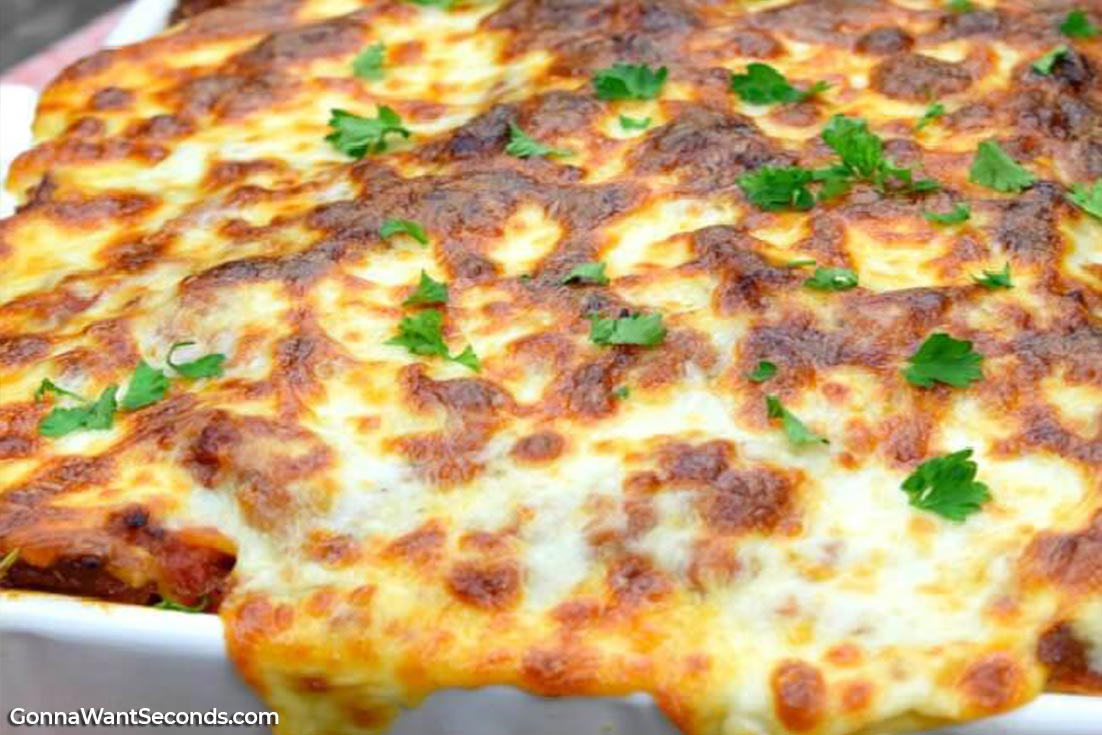 Casseroles like Million Dollar Spaghetti do fabulously when stored — just make sure you store it properly, in the fridge, in an airtight container.

Absolutely! Many casserole baking dishes come with their own attachable airtight lid. If yours doesn’t have one, simply ladle the Million Dollar Spaghetti into any airtight container you have, and store in your freezer for up to three months. Remember, frozen pasta will get softer, so there will be a textural change.

To Freezer Before Its Baked

If there’s food more make-ahead friendly than casseroles, I don’t know it! Million Dollar Spaghetti can be whipped up in a pinch by making the sauce (Step 3) and storing it in an airtight container in the fridge for up to two days. When you’re ready to compile the full dish, simply make the remaining ingredients, mix in the sauce, and proceed, time saved!

It’s a great dish to prep the day before or early on the day of serving. Just assemble the dish, and refrigerate. A covered pan of million dollar spaghetti can last 24 hours without drying out. Just before dinner you can pull the dish out of the fridge and bake. I would strongly recommend that you let the pasta sit out on the counter for 30-40 minutes or so after pulling it out of the fridge.

***Do not put a cold glass or ceramic baking dish in a hot oven or it might break. I usually pull the pasta out and set it on the counter while I fix the garlic bread and salad.

If necessary, you can use two 8×8 baking pans. Sometimes I’ll bake one small pan and freeze the other for a later meal.

After baking, this casserole needs to sit for a little bit before cutting. I usually give it 10 full minutes of cooling before I dig into it with a knife or spatula.”) 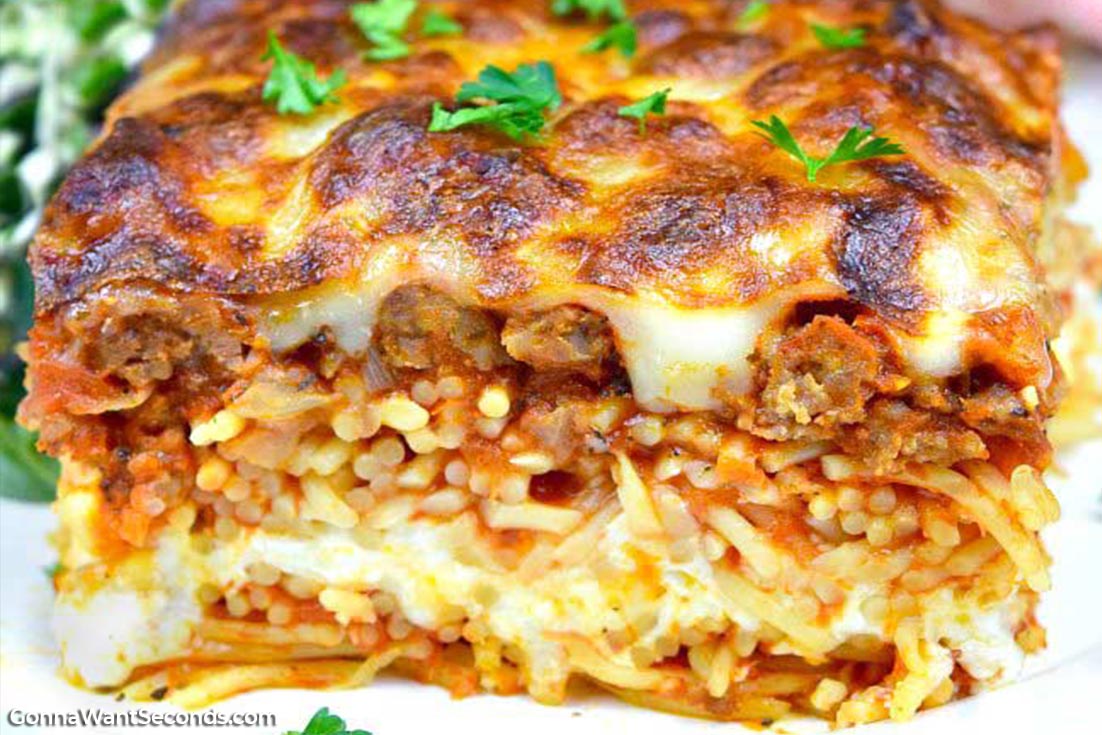 What Other Baked Spaghetti I Can Try?

If you were brave and tried the cottage cheese in your Million Dollar Spaghetti, then you no doubt have come to understand why unusual cheeses in baked spaghetti is a good idea. Feeling even more adventurous? Try out baked spaghetti with cream cheese for your next dish!

Can I Cook This Using Instant Pot?

Can I Add A Mexican Twist?

¡Sí! Taco spaghetti is a tried and true favorite in my household. Merging Mexican seasonings with  Spaghetti to create a Mexican Spaghetti hybrid is a path to deliciousness, friend. Maybe serve with a margarita, age permitting! 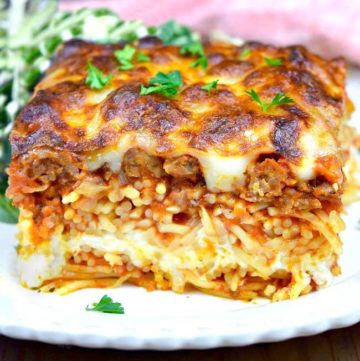 I don’t know about you, but once I take a culinary risk — like cottage cheese with pasta! — I’m hungry for more creative spaghetti dishes! Here are a few more to get your tummy rumbling and your mind whirling:

Though Million Dollar Spaghetti might not give you an actual million dollars, it’ll certainly make you feel rich — in the kind of ooey gooey comfort food that pulls every member of the family to the table!

Slice up hearty portions of this belly-filling lasagna-spaghetti hybrid and settle down into the warmth of a meal well served.