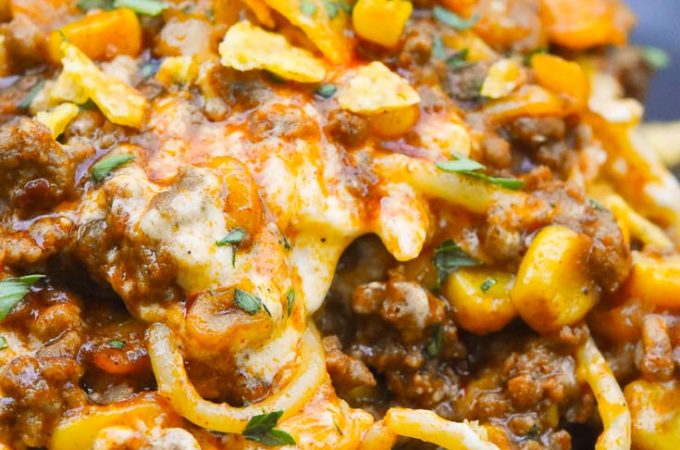 This taco spaghetti recipe blends wholesome everyday ingredients to create deliciously intense flavors that can feed a crowd in an hour.

It’s easy to get stuck in a rut making the same handful of Groundhog Day dinners but this taco spaghetti recipe breaks the proverbial mold to spice up your suppers! This isn’t one of those spaghetti recipes with a little something extra. Actually, I don’t even think it’s Italian, but it’s so delicious who cares?!

Forget those boring pasta recipes that do little to hold your interest. This taco spaghetti recipe is full of vibrant robust flavors that combine two of my all-time favorite dishes. Even most kiddos agree that taco spaghetti is a tantalizing force to be reckoned with! 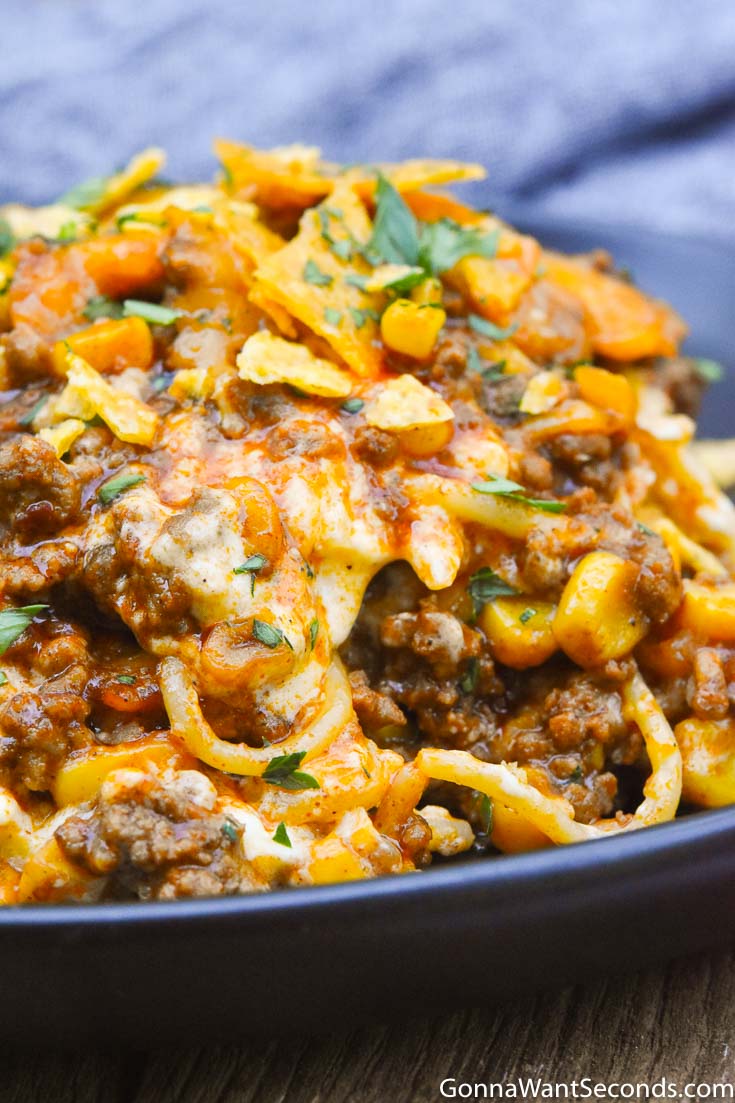 What I Love About Taco Spaghetti Recipe

I love that this taco spaghetti recipe is a divinely inspired mouth-watering work of art. Its super simple to throw together and you don’t need any crazy kitchen gadgets to get the job done. Here are even more great things to love about it.

When you need something fast and out of the ordinary, it’s taco spaghetti to the rescue! This spaghetti casserole is layer upon layer of yummy goodness, and it doesn’t even require any special skills. Here’s what you need to know!

Ground Beef – I like to use 80/20 for this recipe but use whatever you’re used to. You could even use ground turkey to save some calories. Break up your beef as you brown it just as you would for tacos. It typically takes around 8-10 minutes for ground beef to reach the USDA recommended a temperature of 160 degrees Fahrenheit.

Spaghetti Noodles – You’ll want to cook your pasta al dente so it doesn’t come out of the oven mushy. For a super bangin’ flavor boost to your taco spaghetti recipe, salt your pasta water. Between 1-2 tablespoons per gallon of water may seem heavy-handed but it’s just right.

Taco Sauce – Use a taco sauce you really like. If it’s not your favorite straight out of the jar, you won’t be crazy about it in your casserole either!

Shredded Cheese – By all means, if time is of the essence and you need to grab a pre-shredded bag of the convenience of the grocery store shelf, then go for it! But, we’re only talking 2 cups.

If you can find the time to shred the cheese yourself, it melts better and tastes sooo much creamier. You will notice the difference! 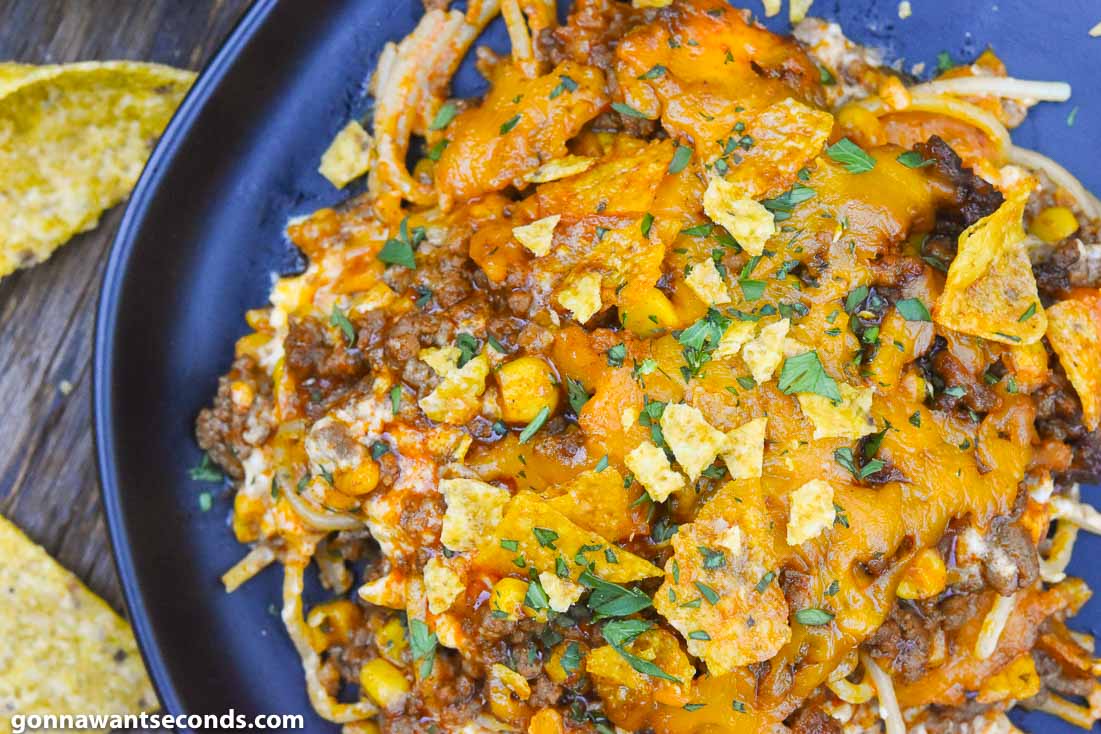 This baked spaghetti casserole stores best in an airtight container with a secured lid – if there’s any left! The yummy flavor combination surprises people and they tend to overeat when I put this out.

Also, this taco spaghetti recipe doesn’t store well in a bag. The casserole disappears and you’re left with a taco noodle mess.

Technically, yes and no. Noodles are crazy finicky in the freezer often thawing into a mushy mess and sour cream doesn’t do well in the frozen abyss either.

I often make the taco meat sauce with the corn and freeze that so it’s ready to go. When I’m ready to throw my casserole together all I have to do is boil the spaghetti and stir the soup mixture together.

This scrumptious taco spaghetti recipe is awesome for meal prep. I often whip up a few batches of the taco meat sauce and divvy it up into casserole sized portions. Then I just label it and toss it in the freezer. Since the frozen meat sauce stays good for up to 3 months, I can thaw them one at a time as I’m ready to make a casserole.

Your taco spaghetti recipe will stay fresh in the fridge for up to 4 days if it’s stored properly. You’ll want to let it cool completely before putting it in the fridge.

My casserole dish has a fitted lid for storage so depending on how much I have left I sometimes leave it in there. I still like to add saran wrap under the fitted lid to ensure an airtight fit. 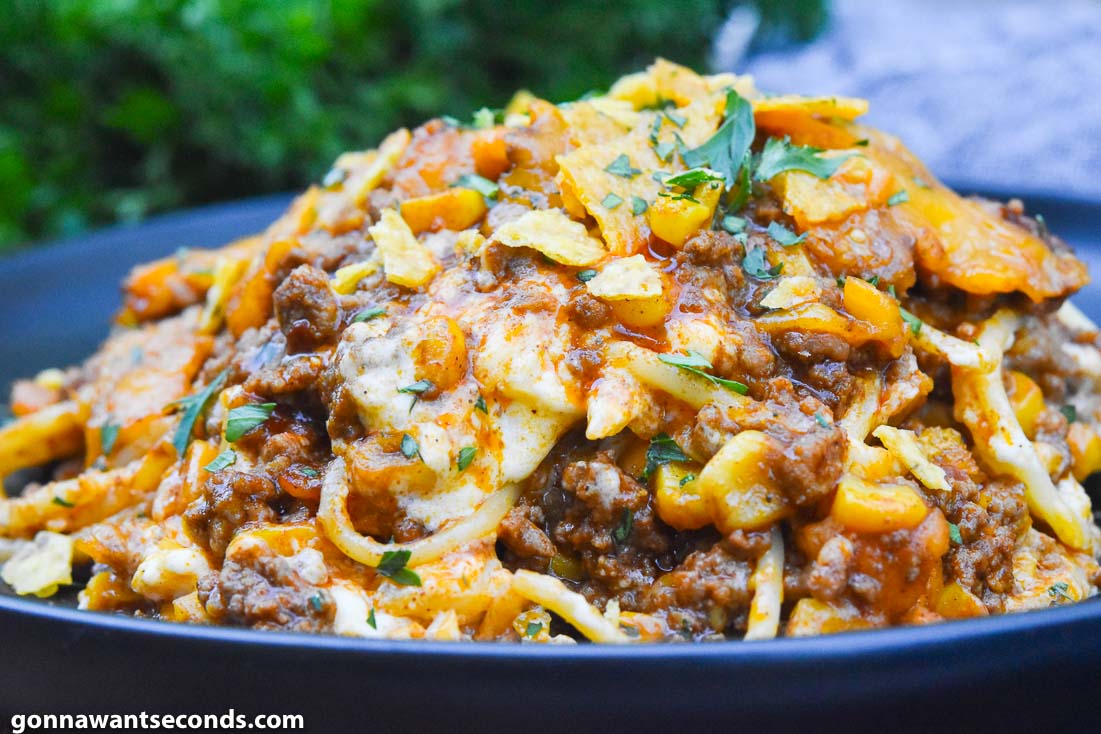 Just like traditional spaghetti, this taco spaghetti has a ton of different variations. Tweaking this recipe to suit your personal taste is just part of making it your own. Here are just a few suggestions of some of the most common changes.

Can I Make This In An Instant Pot Instead?

Using an instant pot means you can make this taco spaghetti recipe in a fraction of the time. If you find yourself without the taco-inspired ingredients, you can just make instant pot spaghetti. It’s still a fabulous meal that only takes a few minutes.

Got meatballs? Throw together instant pot spaghetti and meatballs instead!

Can I Use Chicken Instead?

Chicken spaghetti is actually quite popular these days!

What Other Ingredients Can I Add To This Spaghetti?

Tweaking this taco spaghetti recipe is up to you! If you want something with a little more kick, you can try making chicken spaghetti with Rotel. Taco spaghetti isn’t spicy, but it is full of intense flavor that will wake up your taste buds!

It’ll make your traditional spaghetti and meatballs recipe look like child’s play. Now if you’re looking for something a little more old fashioned with a creamier consistency, try baked spaghetti with cream cheese.

Can I Make This In A Crockpot? 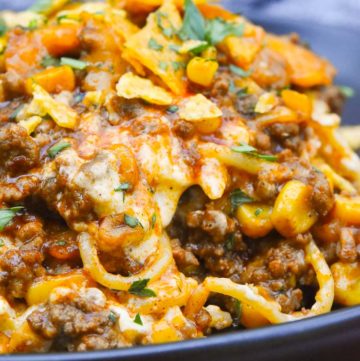 There are so many wonderful ways to make spaghetti when you’re ready to get down to business! America loves spaghetti and we have taken it and made it our own in so many scrumptious flavors.

This taco spaghetti just happens to be one of the best, but you can never have too many different spaghetti dishes. Here are a few others you may want to save for a rainy day.

I’ve got to say that I am proud of this taco spaghetti recipe. To say that it’s a new twist on an old classic is an understatement! I love that it’s so easy to make and it only requires everyday wholesome ingredients.

It’s a simple casserole full of bold flavors that blend seamlessly and practically beg to be eaten. If making spaghetti is a work of art in the kitchen then taco spaghetti is a full-flavored decadent masterpiece!