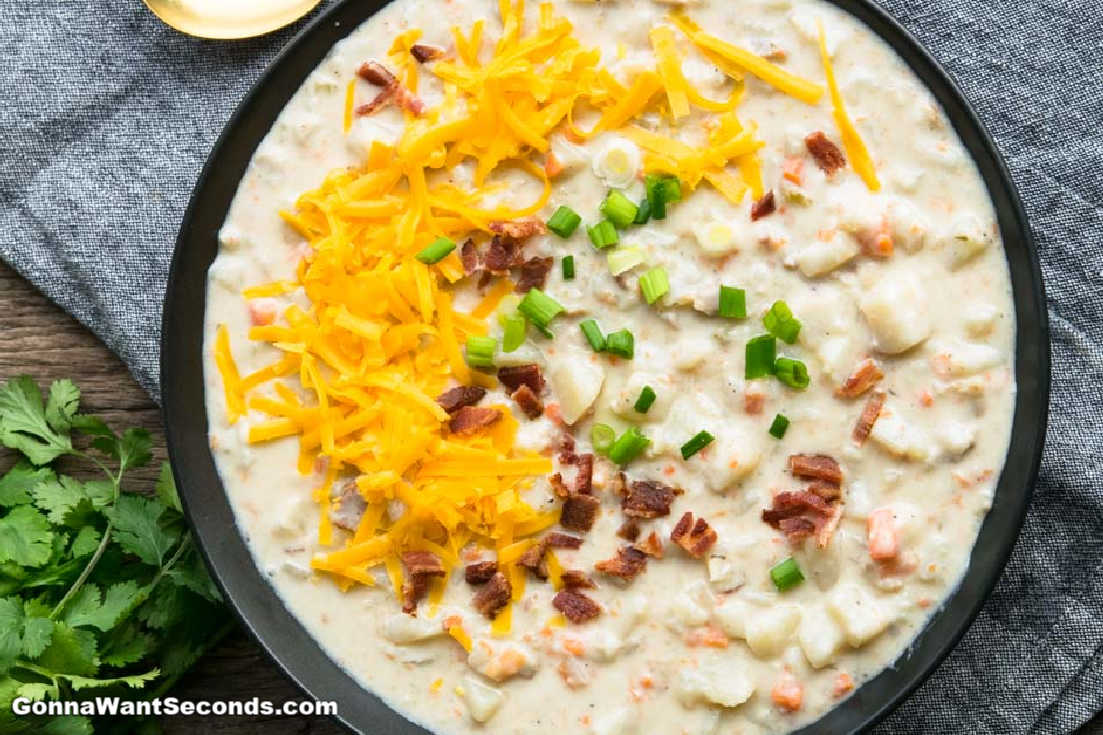 Crockpot Potato Soup is a fix it and forget it dream boasting lotsa’ tender veggies swimming in a rich cream sauce to wow taste buds and fill tummies!

Crockpot potato soup recipe is a creamy, velvety meal you’ll be glad to come home to and it feeds a crowd. Warm the family on a cold night and give those taste buds a delicious treat.

Think basic potato soup on steroids with plenty of tender veggies swimming in a rich cream sauce. There couldn’t possibly be anything better!

Or use up some of those chicken leftovers by turning it into a tasty chicken potato soup. Unless you swap the potatoes for corn and serve chicken corn chowder. In any case, you’re gonna’ love this recipe! I promise!! 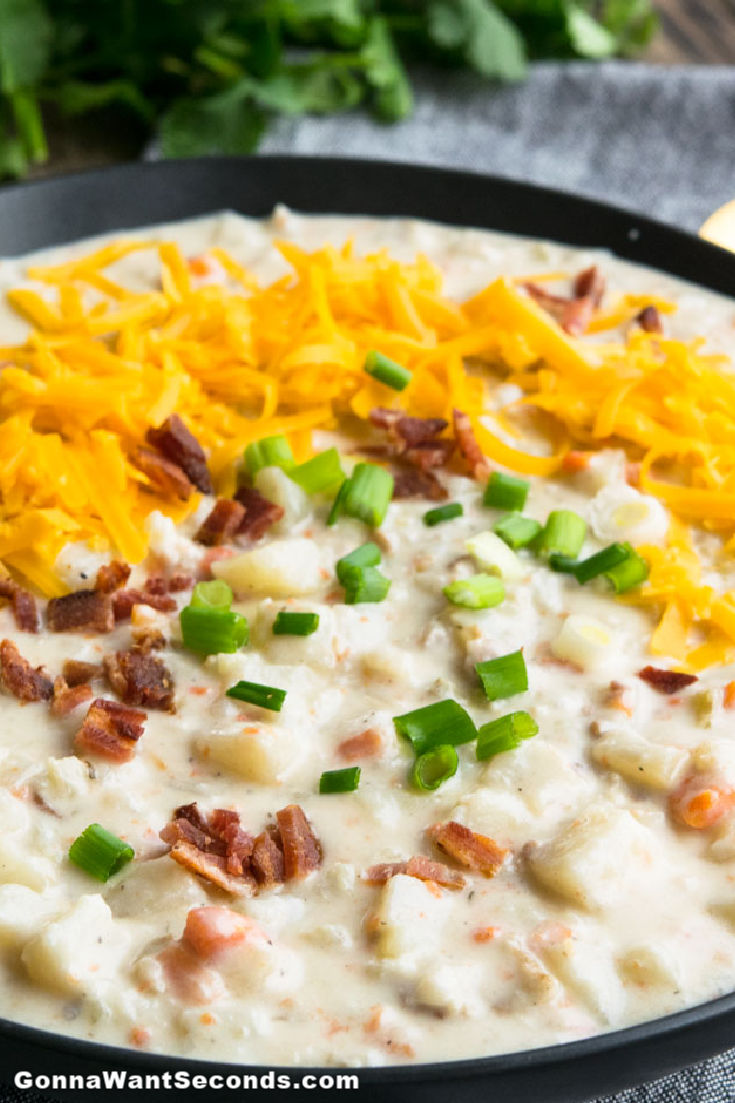 What I Love About This Crockpot Potato Soup Recipe 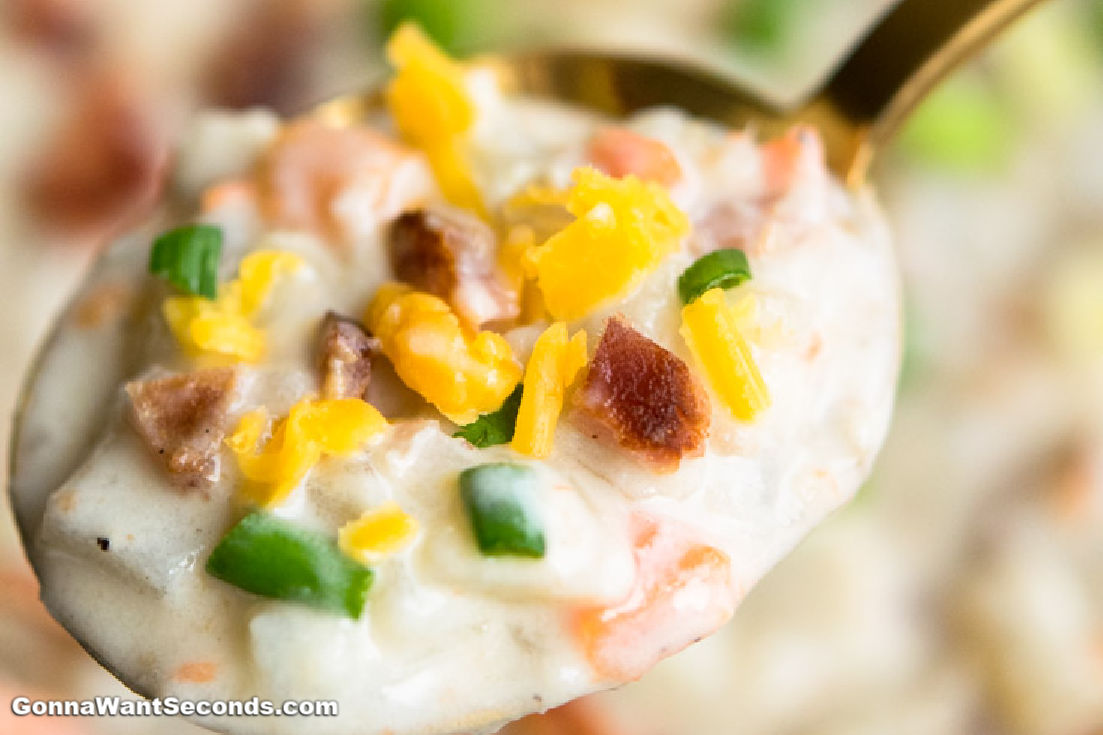 This hardy potato soup recipe is a savory rendition of everything we love about cold-weather meals. The best part is that it’s a breeze to make because the crockpot does all the heavy lifting!

Potatoes: If you look on the internet, there are plenty of recipes for easy crockpot potato soup with frozen hash browns, but I prefer fresh potatoes for this recipe.

Different potato varieties will affect the consistency and flavor of your soup just as using fresh or frozen. Personally, I like using Russet potatoes for this recipe because of their high starch content but just about any type will work.

Consistency: In addition to flour, I mash some of the potatoes to thicken this soup. It’s the easiest way to adjust the thickness of the soup.

Mash a little at a time and stir until you find the right thickness for you! Also- I prefer to use a hand masher. It leaves more chunks of potato than an immersion blender, and I can control the amount of ‘mash’ better.

Nutrition: You can also whip up a healthy slow cooker potato soup version with just a few little changes. Grab low fat milk instead of heavy cream and swap the pork for turkey bacon to save a ton of fat and calories without sacrificing flavor.

You can compensate for any thickness lost by mashing extra potatoes. Easy Peasy.

I typically transfer my leftovers to an airtight container when it goes into the icebox. Sometimes I divvy it up into single-serve portions that are easy to grab and toss into the microwave.

Freezing crockpot potato soup with heavy cream is a bit of a conundrum. Creamy soups tend to reveal consistency flaws after a long stay in the frozen abyss….but there are options.

If you’re making ahead to freeze, you’ll want to follow the recipe directions and stop before adding any dairy. It also helps to cut the potatoes a little larger and slightly undercook them as they’ll break down a little in the freezer.

Your frozen potato soup will keep for about 3 months. To serve just reheat the soup base, add the dairy, and heat through. You may need to mash a few of the potatoes as you’re heating to get the consistency just like you want it but that’s simple enough.

If your schedule is anything like mine, then prepping ahead can be a lifesaver! There are a couple of little things you can do to make things easier in the kitchen on soup day.

For instance, you can do all the veggie prep and partially cook the bacon so it’s ready to go. Store them separately, of course.

The veggies will keep nicely in a mason jar and you can cover the peeled cubed potatoes with water to keep them from browning (it slows oxidation).

There is no wrong way to serve this crockpot potato soup recipe! Garnish with a dollop of sour cream and your favorite toppings to serve crockpot loaded potato soup with some easy Bisquick drop biscuits…yum, yum dinner is done!!

You can also pair it with a homemade French dip sandwich for a delicious hot lunch or simple supper. This crockpot potato soup recipe is cozy comfort food at its finest. 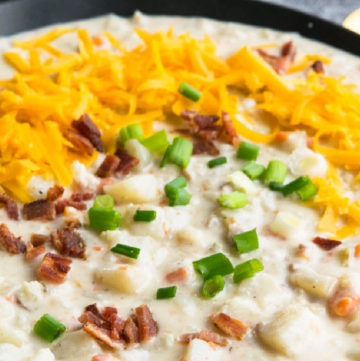