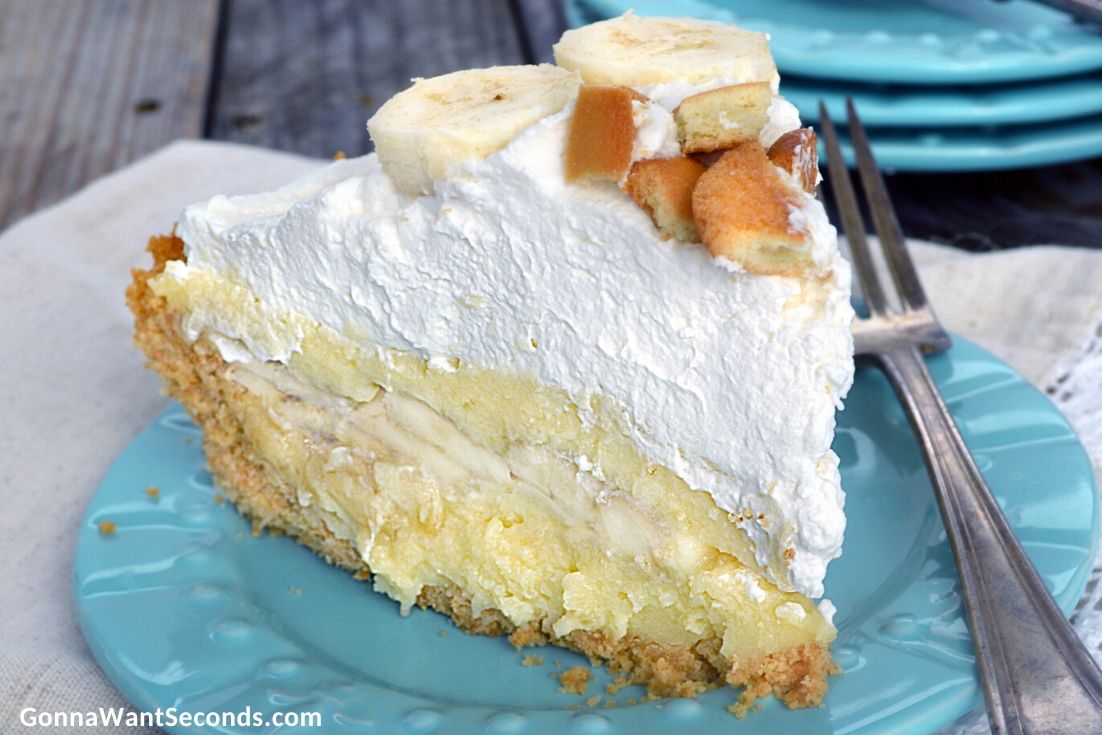 My banana cream pie is the king of Easter pie recipes with a velvety custard, freshly sliced bananas, a crunchy cookie crust, and a mountain of fluffy whipped cream!

For any spread of Easter dessert recipes, you want treats that are luxurious in flavor and texture. Which is why banana cream pie is an obvious choice! This diner classic is pure All-American goodness that’ll be a new must-have for your Easter recipes book.

I love serving this pie with other favorites like Atlantic beach pie, million dollar pie, and tart blackberry pie.

Every mouth will be happy! 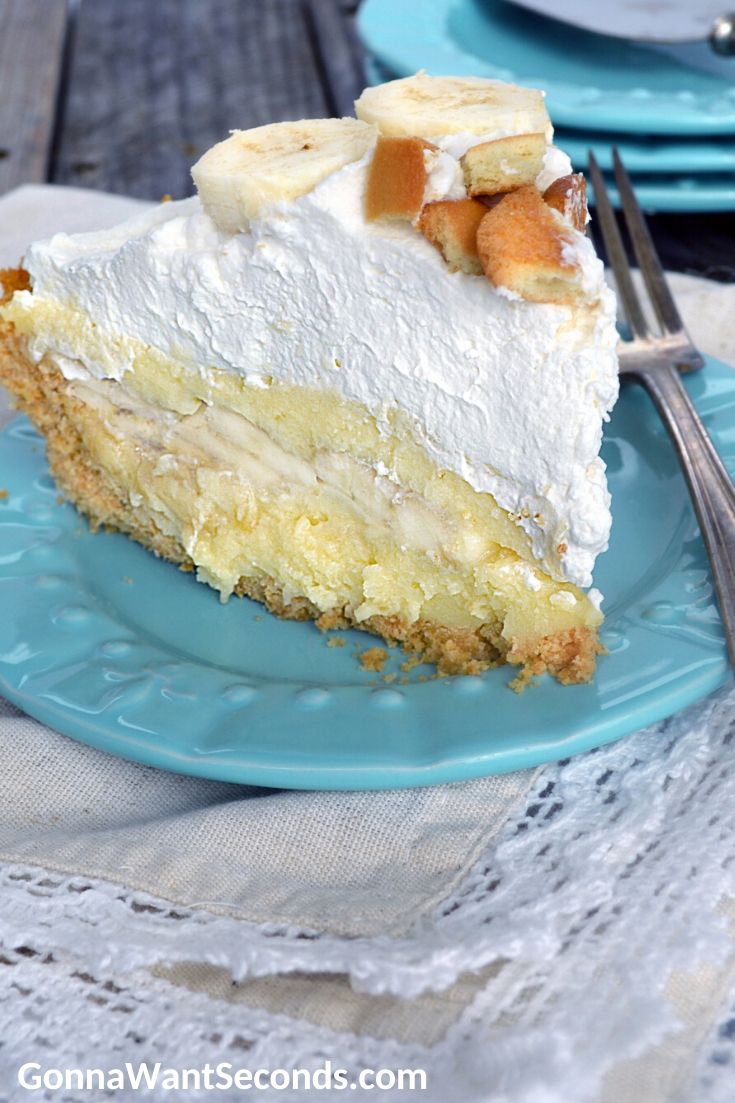 When you pull out a pie mounded with whipped cream, who could possibly say no? Every party gets better and every guest is happy! 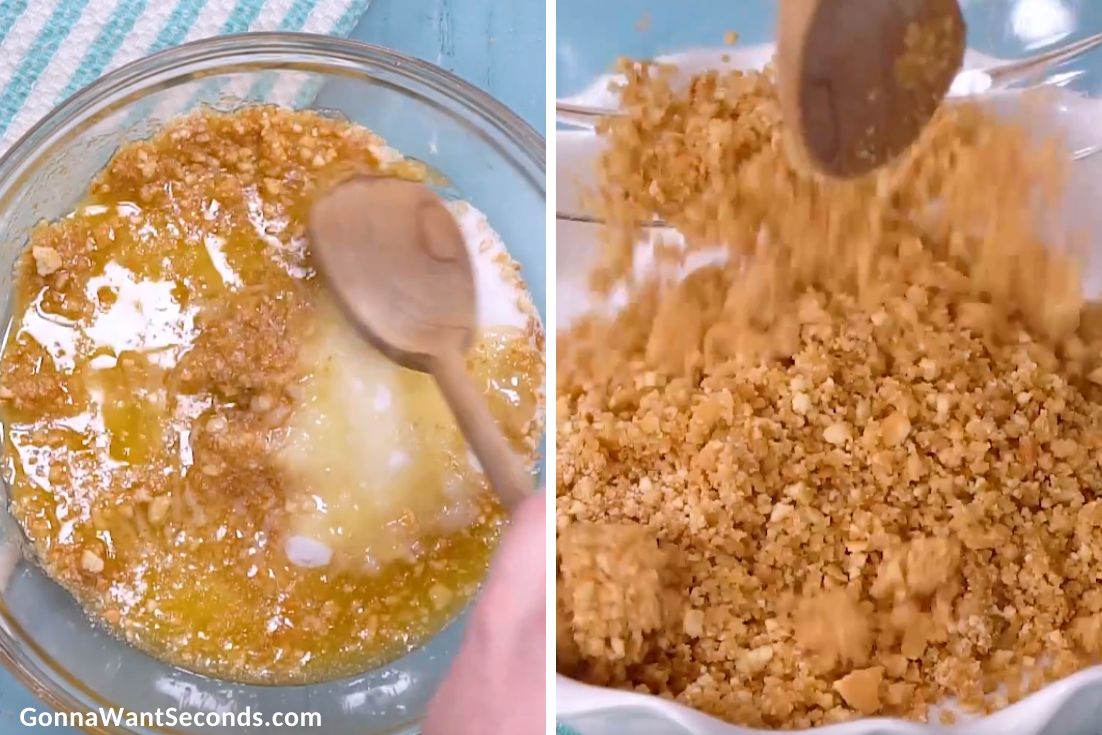 If you’ve wanted to venture into pie making, my banana cream pie recipe is a great place to start!

Start by preheating your oven. In a mixing bowl, combine your vanilla wafer crumbs, sugar, and butter, then press the mixture into a pie pan. Bake until golden, and cool.

While your pie is cooling, combine your sugar, cornstarch, and salt in a saucepan. Whisk in egg yolks, milk, and cream. Gently boil and whisk until it thickens. Remove from heat and add the vanilla, butter, and brandy. Put your filling in a bowl to chill for about thirty minutes.

Layer cooled filling on the cooled crust with sliced bananas. Cover and chill.

Meanwhile, make your whipped cream, and spread over your chilled pie just before serving. 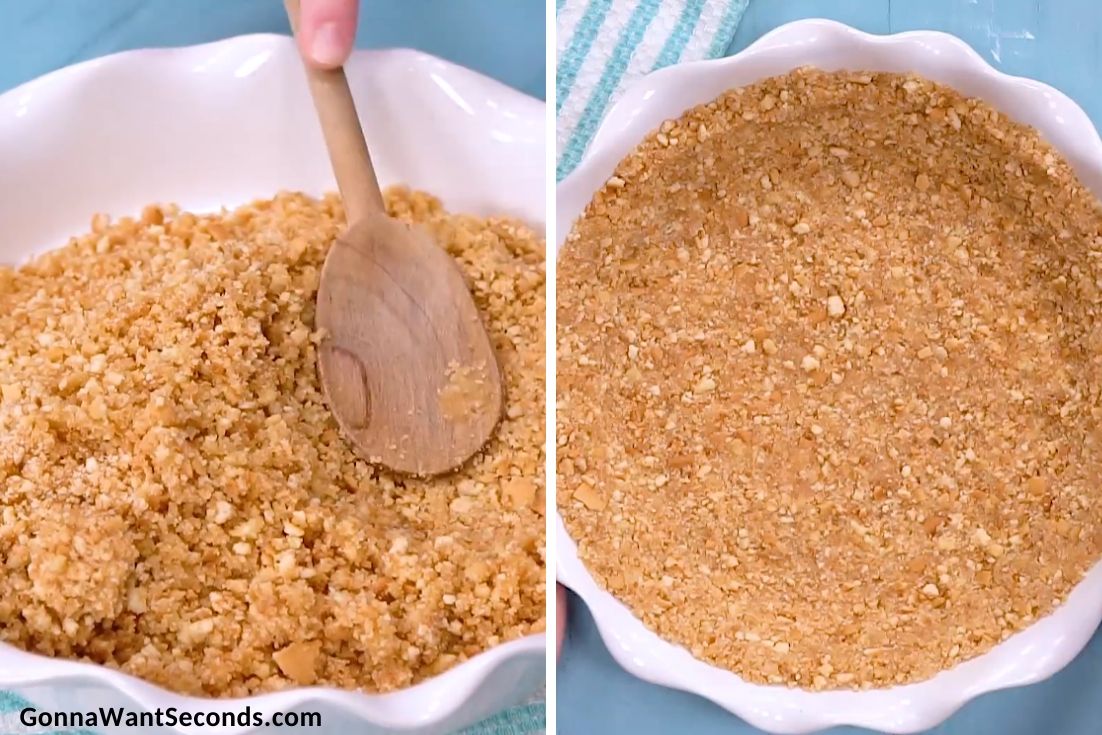 Nervous about making custard for the first time? Not sure whether you really need to chill your pie so much or not? Read on for all of my tricks!

The ingredients are common, but the final result is heavenly!

A lot of pies use homemade flaky pastry crust — but I love how easy crumb crust is to prepare! No rolling or floured counter mess. Plus, it tastes like cookies, so double win! I use vanilla wafers but is also absolutely delicious with either a rolled pastry crust or a graham cracker crumb crust as well.

One thing that may go without saying for most people, but I, of course, had to find out the hard way, is all Nilla Wafers are not created equal. My favorite are the ones made by Nabisco (I’m not being paid or compensated to say this).

If you’re short on time, or just want a quicker version of this recipe, you can simplify things by using a store-bought graham cracker crust or a boxed pastry crust. 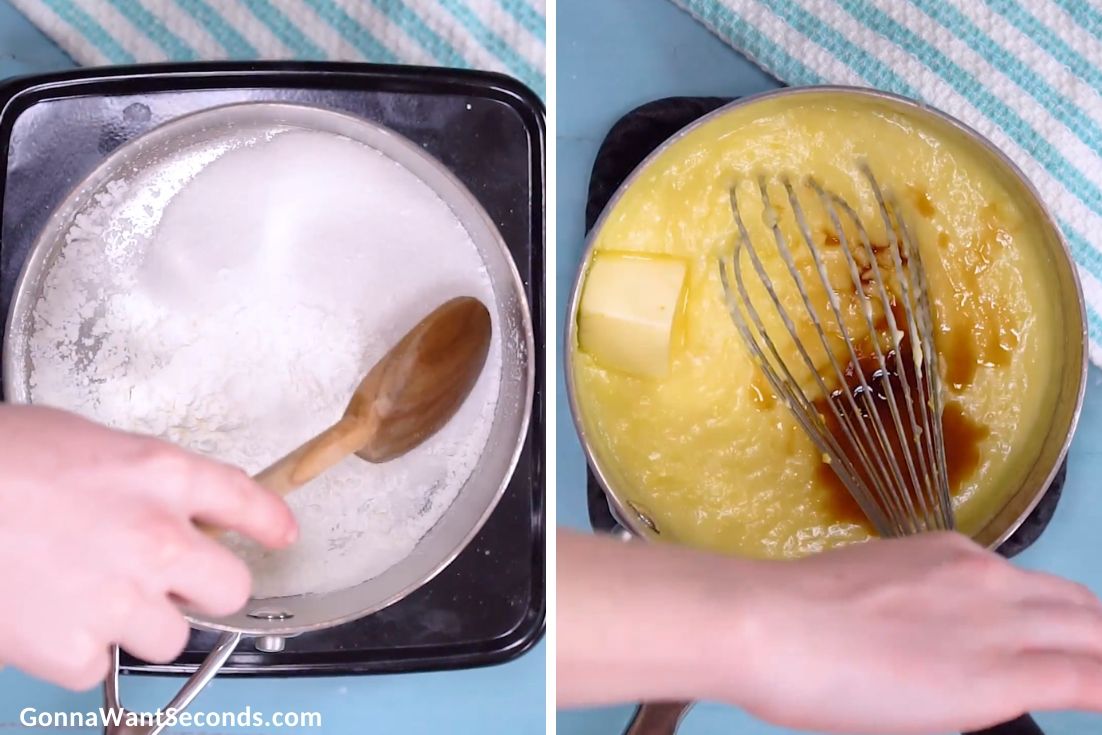 You must cook your custard to 212 degrees, which is just around the boiling stage. The egg yolks have a starch-digesting enzyme called alpha-amylase. In order for a successful gelling of starch, it has to be cooked at that temperature, or your custard will be nothing but liquid.

This recipe is best made with firm, just-ripe bananas. They hold up in the pie better than very ripe bananas and they keep their nice bright color longer. 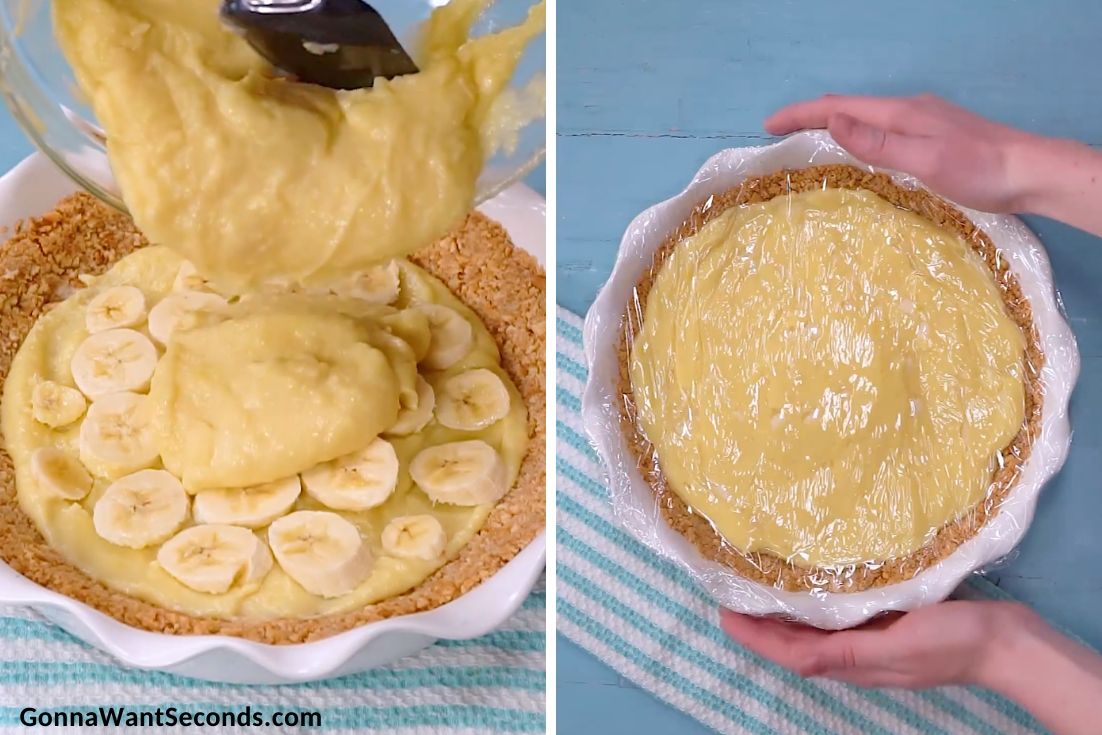 I like a nice thick layer of whipped cream on this pie, so I start with 2 cups of heavy cream. 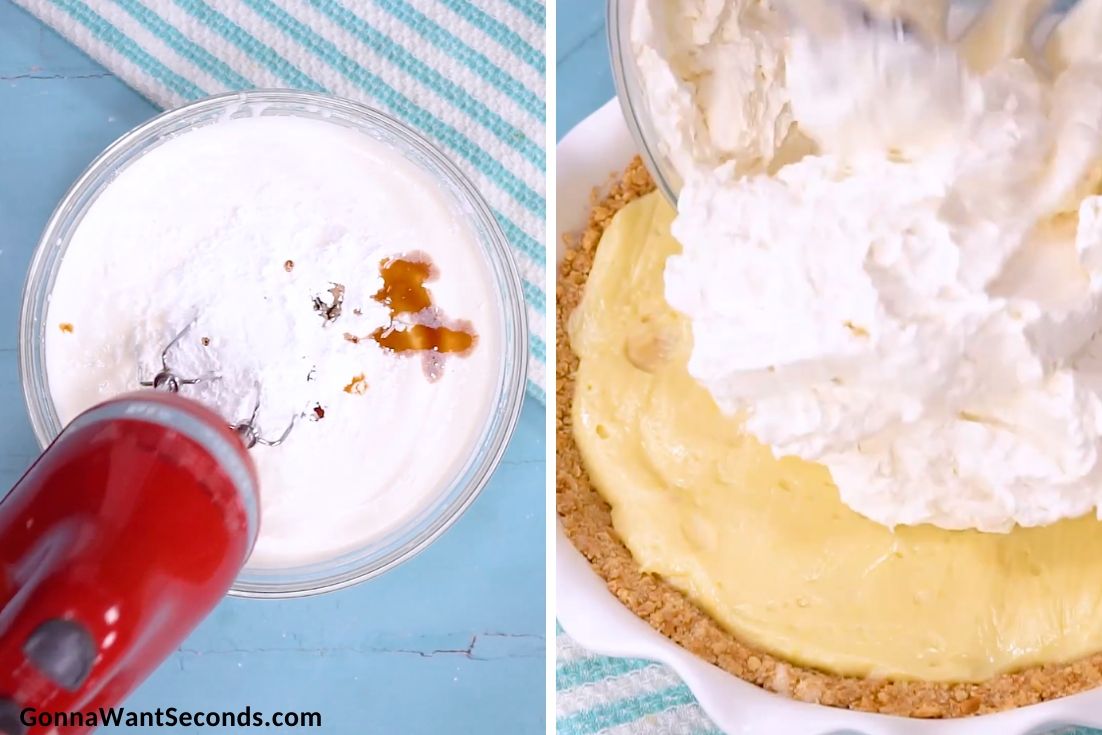 There’s really only one way to store any banana cream pie! What is it? Read on!

Unfortunately, no. All the cream and dairy in this recipe would not get along with a freezer, causing separation and weird textures. Fridge only for this pie! 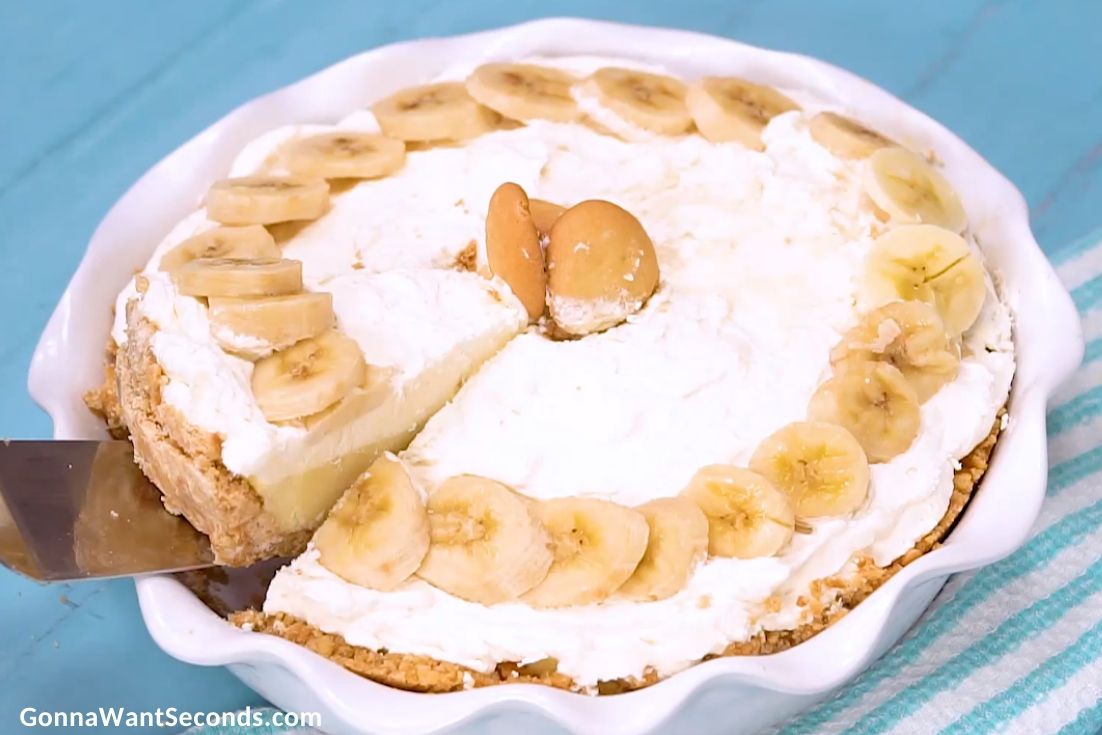 I strongly prefer to serve the pie the same day it’s assembled! It’s best fresh in every way.

Leftover banana cream pie can sit in a fridge for up to four days. Keep in mind that your bananas will turn brown, but the flavor will still be yummy! 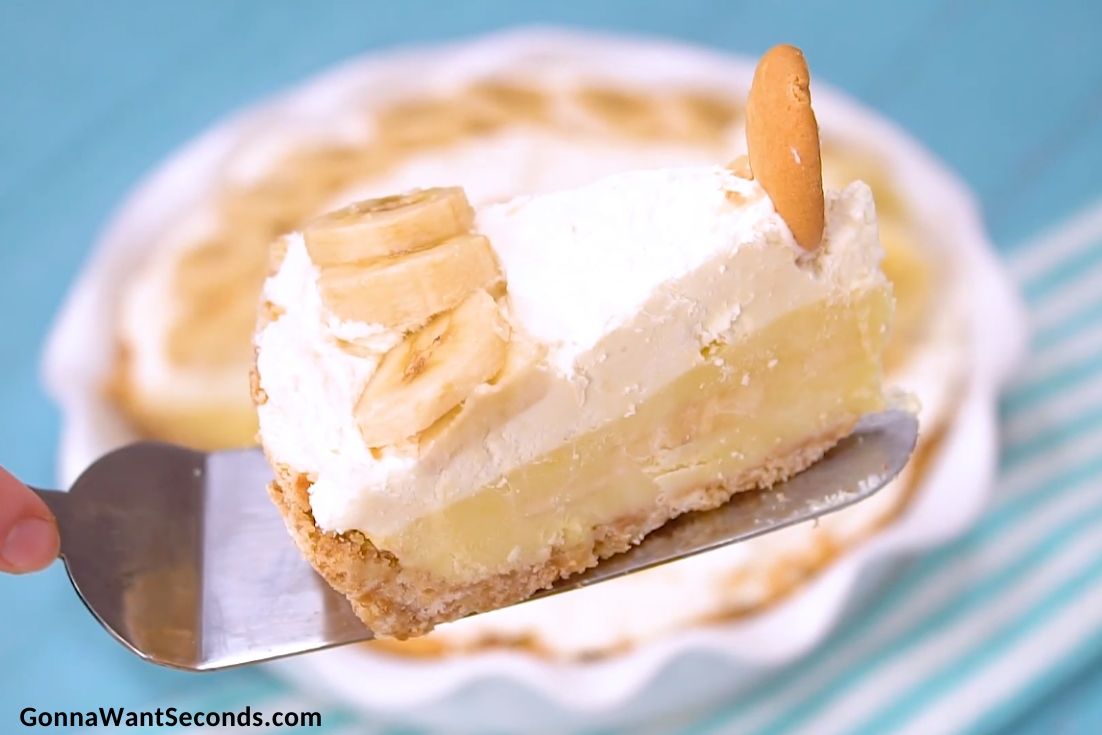 What other kinds of pies can you serve your Easter guests? Here you go! 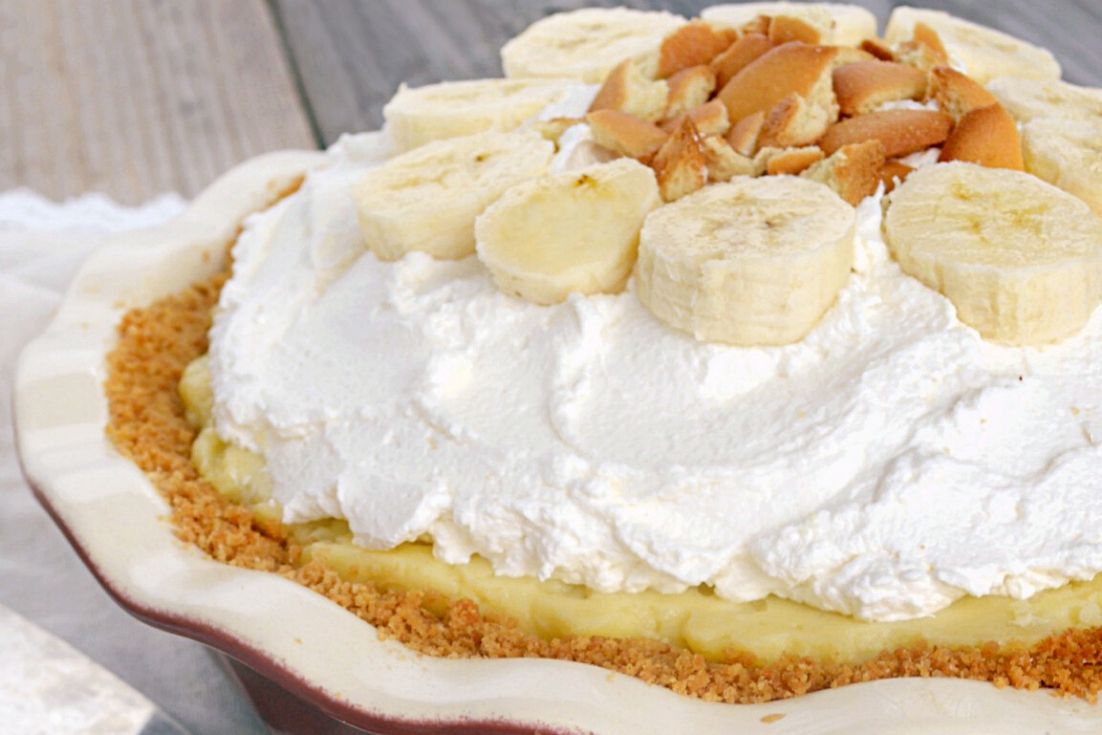 Can I Add Coconut? 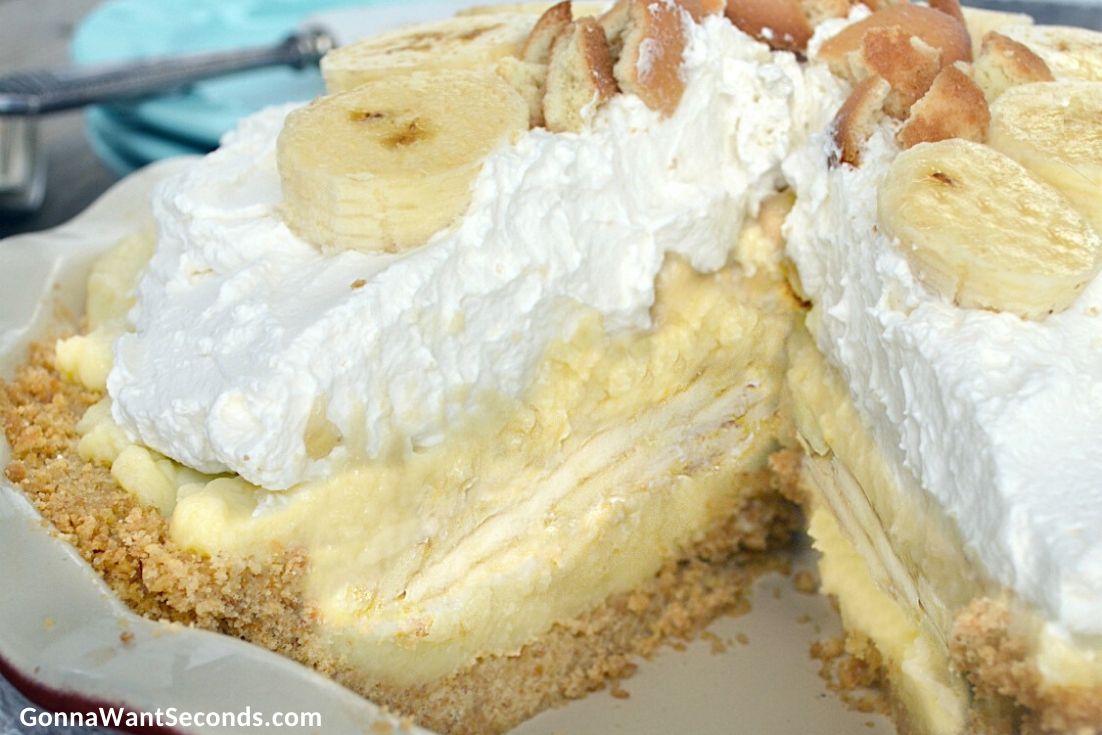 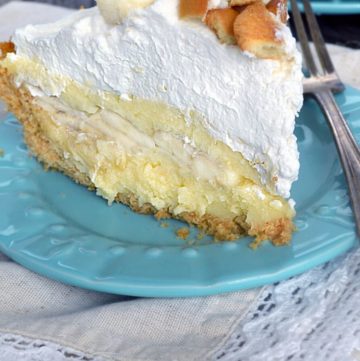 Still not sure you’ve found the Easter dessert of your dreams? Here are some more winners!

Whether you make this banana cream pie recipe for your Easter party or whip it up just to indulge yourself, I think you’ll agree that it’s way too easy to make something so delicious! I’m tempted to make this pie every week. Which is great for my tastebuds but bad for my waistline!

What did your guests think of this pie? Let me know in the comments!