Like an old school recipe swap, but with social distance 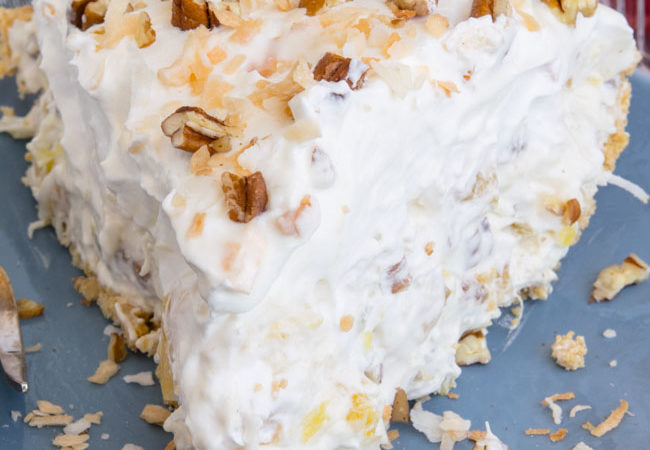 This creamy, no bake, Million Dollar Pie is the easiest pie ever to make. Its luscious tropical filling is utterly delicious. An ideal dessert for summer! This recipe for Million Dollar Pie is a Huge fan favorite in our household and everywhere I bring it!! It incorporates a sweet (very sweet), luscious creamy filling, loaded

This creamy, no bake, Million Dollar Pie is the easiest pie ever to make. Its luscious tropical filling is utterly delicious. An ideal dessert for summer! 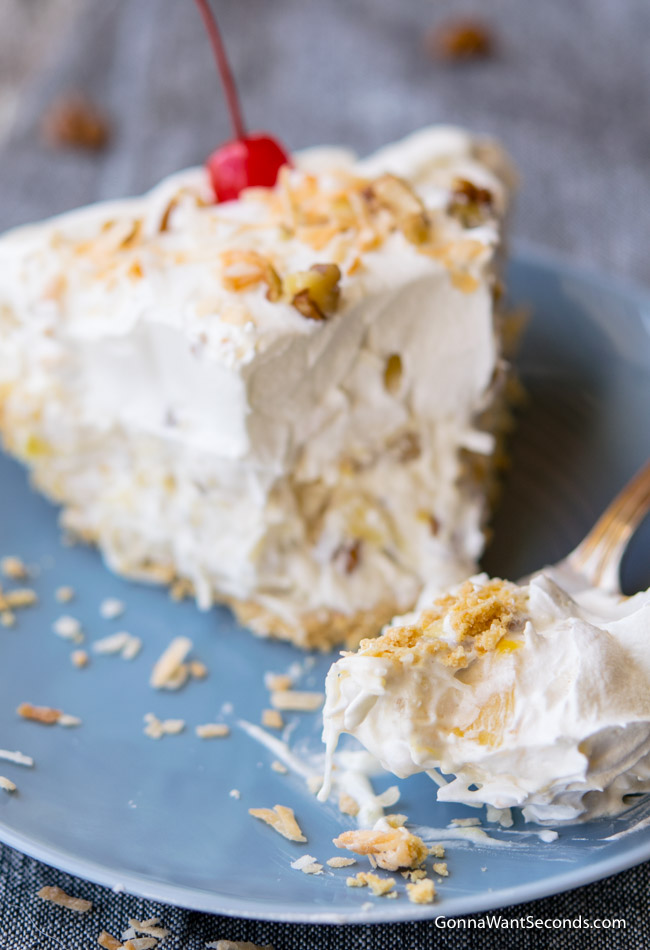 This recipe for Million Dollar Pie is a Huge fan favorite in our household and everywhere I bring it!! It incorporates a sweet (very sweet), luscious creamy filling, loaded with fruits and nuts into a baked pie crust and topped with cool whip. If you’re looking for a sure hit at your house or for the next time you need to take a dessert to a potluck, my Million Dollar Pie with coconut recipe is sure to be just the ticket.

While you can find some recipes for Million Dollar Pie without condensed milk, I’m a firm believer in the stuff. I tend to make my Million Dollar Pie Paula Deen style – filled to the brim with a creamy filling that’s chock full of ingredients.

SAVE THIS MILLION DOLLAR PIE

TO YOUR PIE OR DESSERT BOARD FOR LATER 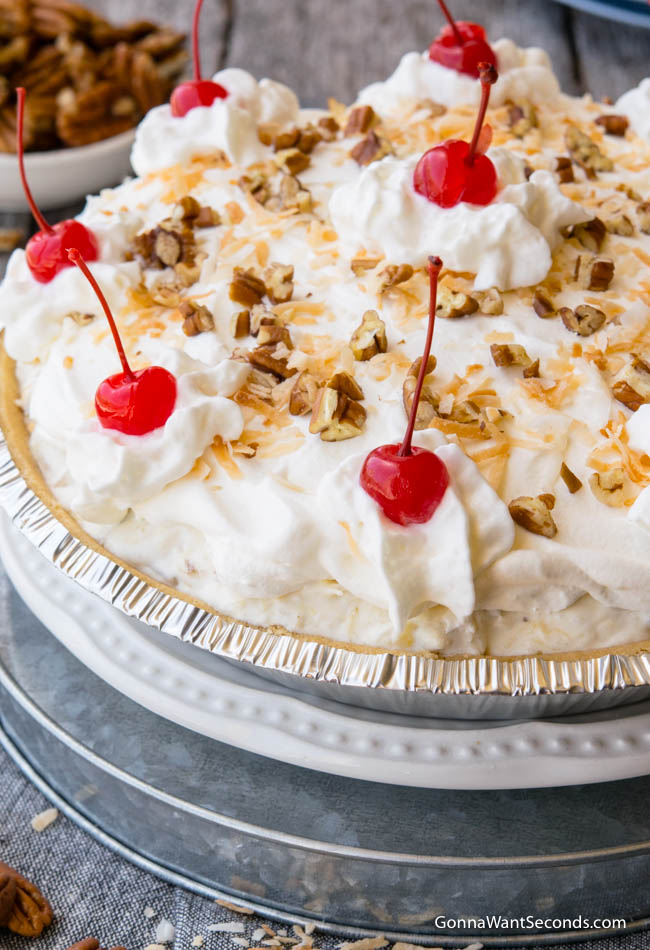 Million Dollar Pie is a creamy, no-bake pie, loaded with lots of pineapple, chopped pecans, and chewy coconut. It’s a vintage recipe straight from my grandma’s kitchen that’s perfect to serve anytime you want to add a little tropical flavor without requiring a lot of effort in preparation!

This pie takes literally 5 minutes to put together!

It is actually said to have been given its name because it’s so delicious it taste’s like a million dollars!

**WHAT I LOVE MOST ABOUT THIS RECIPE** 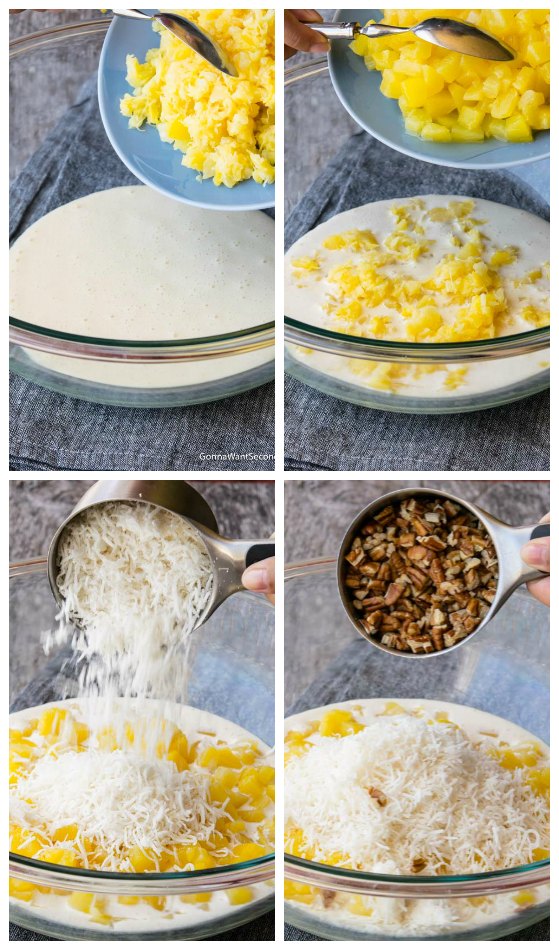 HOW DO YOU MAKE MILLION DOLLAR PIE?

Making Million Dollar Pie is unbelievably easy. Basically, you simply mix together the filling ingredients, pour them into a prepared crust and refrigerate until the filling is firmed up a bit. Then you top it with a luscious layer of whipped topping, give it a little garnish for the “pretty factor” and then it’s ready to be devoured!!

Tip: Sprinkle the pecans and toasted coconut on immediately before serving to preserve the crunch. 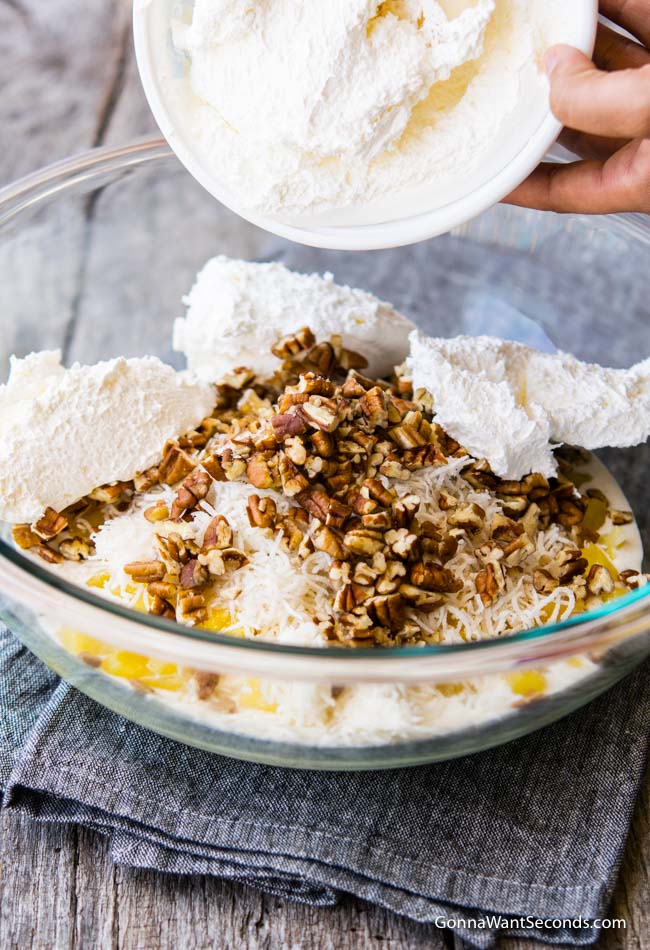 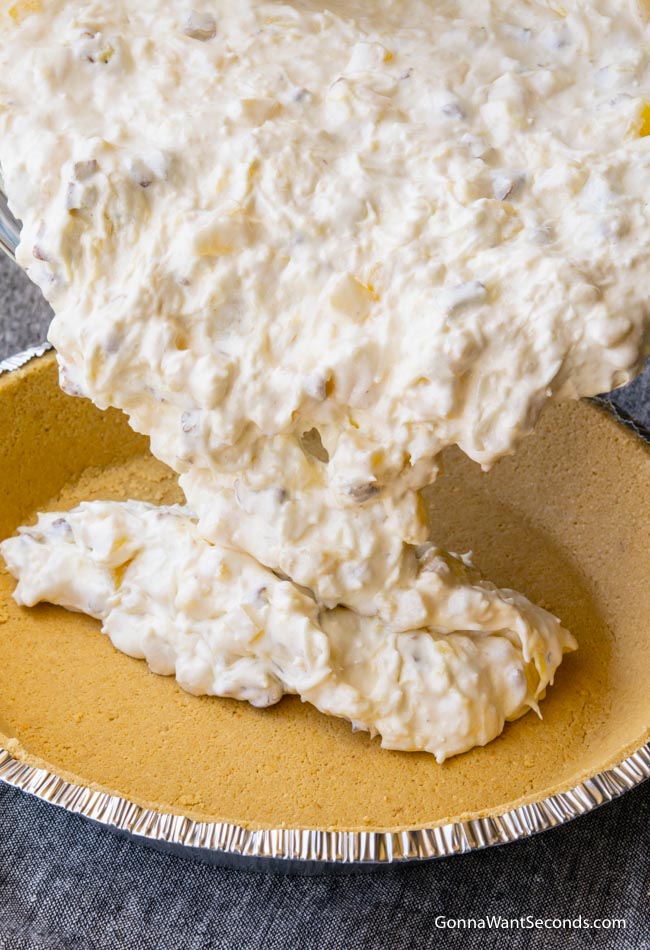 What’s The Difference Between Million Dollar Pie And Millionaire Pie?

As Shakespeare said in Romeo and Juliet, “What’s in a Name?”. His implication was, as I understand it, that the name wasn’t as important as the quality and character of the thing…..

Reader Tip From Jodi:  Millionaire Pie was/is a staple from Furr’s Cafeteria. It is in a regular pie crust, with a thin, sweetened cream cheese bottom layer which is topped with whipped cream which has pineapple and pecans folded in. They are similar but not the same. I never had it at Furr’s with coconut. Thank you Jodi!  It sounds delish!

Can you Freeze Million Dollar Pie?

The short answer for this one is yes, you can.  In fact, I highly recommend it. Because of the cool whipped topping and cream filling, this pie freezes very well. You can even serve Million Dollar Pie when it’s partially frozen.  You just need to wait until the pie has thawed enough to allow cutting.  I especially like to serve it this way on those blistering hot summer days, when everyone is looking for a cool treat! 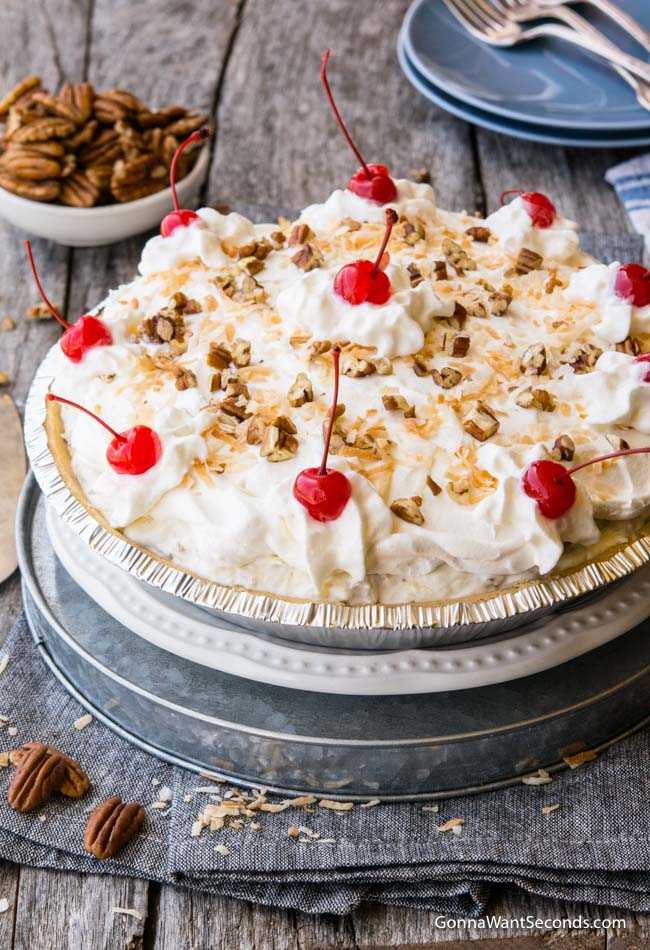 Easy Peasy-The beauty of making a Million Dollar Pie is that it’s EASY!  This is because it’s a no-bake pie – you heard right, it doesn’t require any cooking time. Even easier, ingredients like your pie crust and whipped cream topping are pre-made, making it an ideal sweet treat to make if you’ve got a limited amount of time.

About the thickening-  The filling only thickens a little bit when it’s beaten, but don’t worry,  it firms up a little more when it chills in the fridge. Remember though, the filling will still be soft. It won’t ever be as firm as a cooked custard. Think slightly thickened, fluffy Cool Whip.

Pineapple-  Make sure your pineapple is well drained. When I drain my pineapple, I use a mesh sieve, aka a strainer. I  pour my can of pineapple into the strainer, then with a wooden spoon, I carefully press down on the pineapple. This ensures that I’ve removed as much of the juice as possible. If this step isn’t done correctly, you could end up with a very soupy filling.

Thaw The Cool Whip! It wouldn’t be a Million Dollar Pie without the cool whipped topping. So here’s a reminder to make sure you plan on the thawing time! The Diary Dish says that manufacturers of frozen whipped topping recommend thawing it out in the refrigerator overnight – not on the countertop. This is important because you’ve got both skimmed milk and cream as ingredients, which can spoil quickly if they’re left in temperatures over 40 F.

Crust- In the spirit of having this pie be literally one of the easiest recipes you’ve ever made, our recipe calls for a premade 9 inch Graham Cracker Crust. Listen, homemade is always a more delicious alternative! But even my Grandma use a prepared crust once in a while and, oh man, it makes the preparation a whole lot easier and quicker.

For the filling, I like to add the coconut untoasted and straight out of the bag. I like the soft and chewy texture it provides the filling. For the topping, however, I like it toasted until just slightly golden. It provides a little crunchy contrast to the creamy texture of the pie and a nice bit of extra color to the topping.

If your a Fan of coconut, check out our recipe for Coconut Cream Pie Bars. This is one of our most popular recipes. All the deliciousness of a coconut cream pie in an easy to cut and serve in a 9X13 inch baking dish. Try this one for your next potluck and be ready to be the rock star of the buffet line! 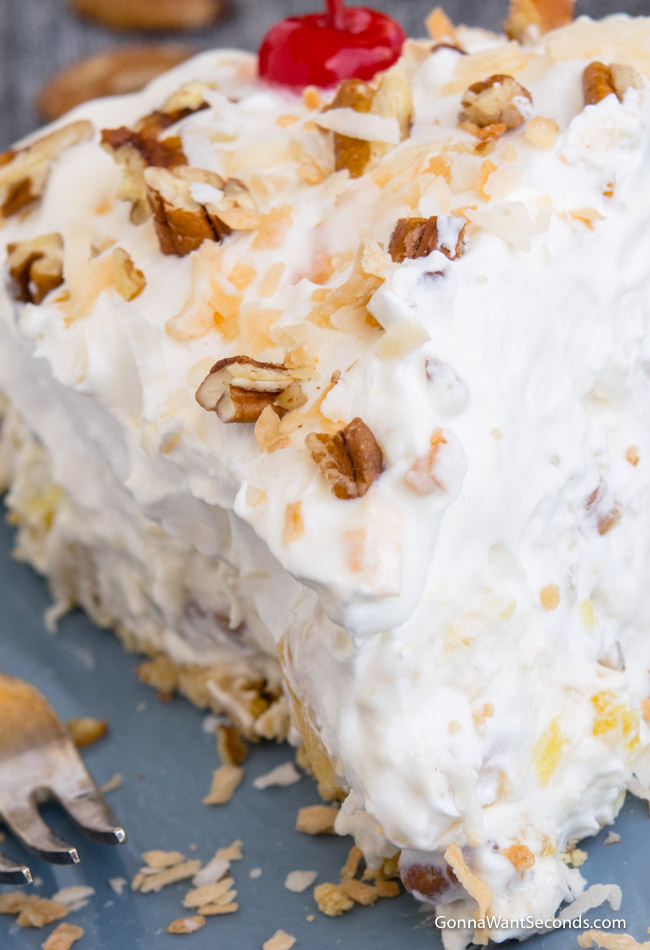 The beauty of a Million Dollar Pie is that you can get creative with it. I’ve posted the recipe below as my family has made it for decades but want to share with you some of my favorite variations.

**DID YOU MAKE THIS RECIPE? WE’D LOVE TO HEAR FROM YOU!**

**PLEASE GIVE IT A STAR RATING BELOW OR LEAVE A COMMENT!** 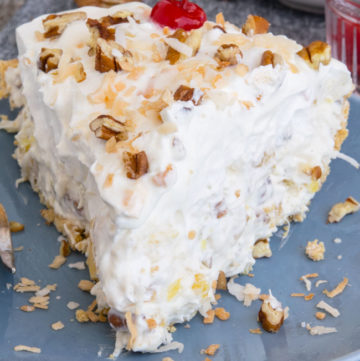 Chocolate Cream Pie – It’s so familiar and comforting it feels like a hug from Grandma in a slice of pie!!! Rich chocolaty flavor, creamy smooth texture, and oodles of pillowy whipped cream topping!
Banana Cream Pie – made with a homemade rich, velvety custard, lots of fresh sliced bananas, a crunchy cookie crust, topped off with a mountain of fluffy whipped cream!
My Ultimate Peanut Butter Cream Pie –  A luscious, creamy peanut butter filling nestles on top of a rich, unique peanut butter ganache, all cradled in a peanut butter cookie crust. Peanut Butter heaven!
Easy Blackberry Pie-  Build a better Blackberry Pie using tapioca, an old-school alternative to flour or cornstarch, plus enough berries to start your own farmer’s market!